As I continue to work my way through the Hunter exotics in Destiny 2, I think I’ve finally come to a piece of armor that I feel sorry for. Young Ahamkara’s Spine, the exotic Hunter gauntlets, look as cool as any exotic in the game. Unfortunately, that’s about where the positives end. 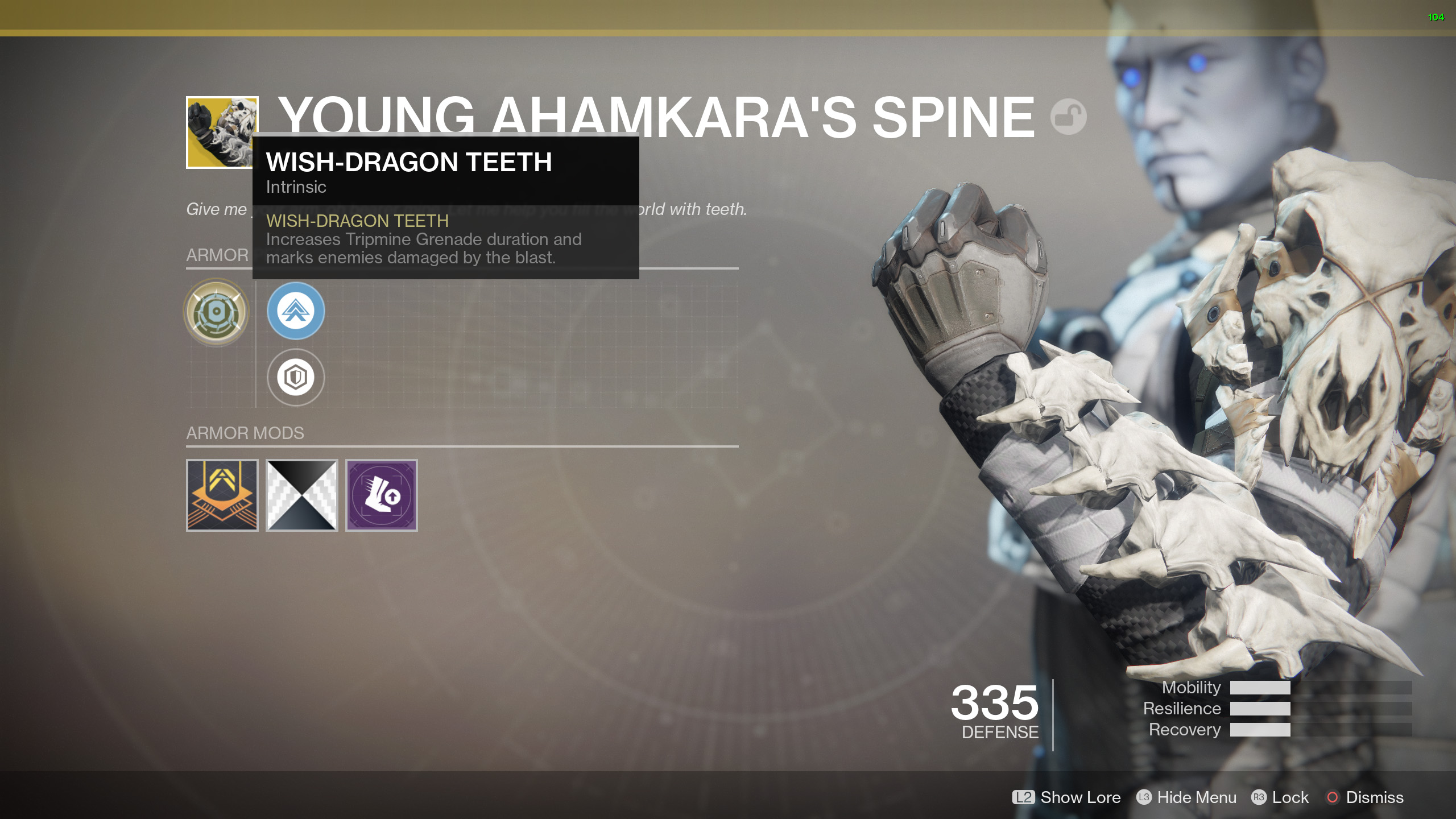 The intrinsic perk for Young Ahamkara’s Spine is called Wish-Dragon Teeth. This increases your Tripmine grenade duration and marks enemies that are damaged by the blast. The Tripmine grenade, however, ranks 15 out of 25 in terms of single target damage potential. Since nothing in the intrinsic perk mentions an increase in damage, it’s safe to assume that its killing potential doesn’t increase, aside from the fact it remains in play longer. You’d be hard pressed to kill another play in the Crucible with one of these unless everything went in your favor, which is rarely the case.

The other problem with the Tripmine grenade is that it has a higher skill requirement to use effectively. Think of it like a motion sensor laser. You stick the grenade to the ground or wall and a laser shoots out from the top. If someone passes through that laser the grenade goes off. Admittedly, I don’t use the Tripmine grenade that often, but that’s for a reason. My limited experience with it has taught me that it relies too heavily on the unpredictable nature of AI and your crucible opponents. You end up wasting a lot of these grenades.

I took Young Ahamkara’s Spine for a spin on Titan while it was the flashpoint. The Tripmine grenade does last a lot longer, and it does mark enemies, but I really didn’t find the value there. It doesn’t kill any more than it did before. Truthfully, I found myself wishing that I was using the Celestial Nighthawk. At least then I get the massive buff to the Golden Gun super ability. 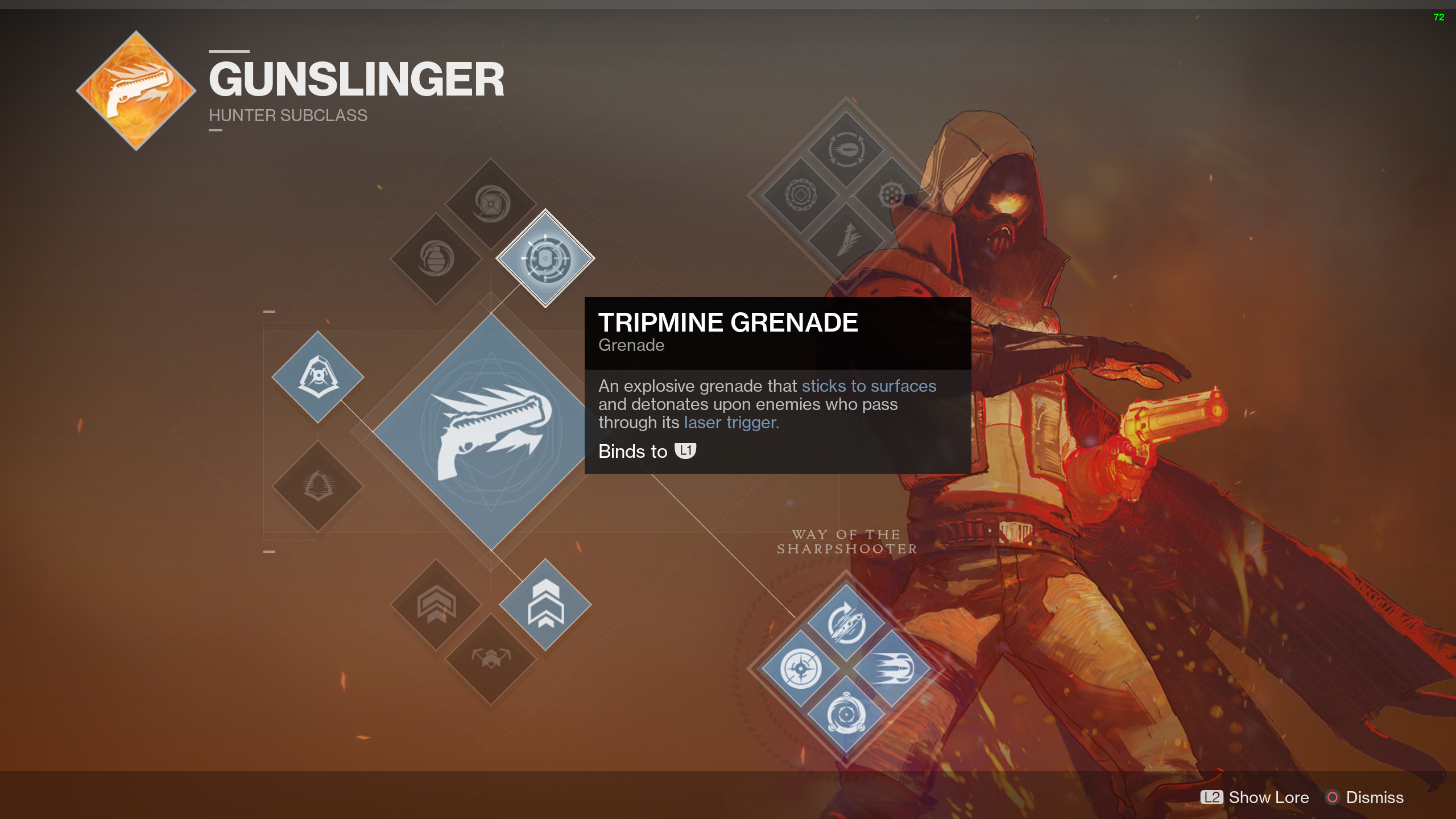 My faith in Young Ahamkara’s Spine and the Tripmine grenade combination increases in PvP, but only a bit, and only because the three best Hunter exotics aren’t in play there. Since there is no reason to use the Celestial Nighthawk in PvP, your exotic slot is there for the taking. You could throw in Young Ahamkara’s Spine, but I still won’t endorse it. PvP is fast paced, and the likelihood that you will need the extended Tripmine duration is slim to none. You could benefit from marked enemies, but that’s only assuming they are hit by the blast. For anyone who would suggest Young Ahamkara’s Spine in PvP, I’d counter with Knucklehead Radar. Argue how longer lasting Tripmine grenades outweigh the benefit of always having a radar, even when you’re aimed down sight.

Young Ahamkara’s Spine is one of the worst Hunter exotics. If you can find a way to make it effective on a consistent basis, good on you. In my opinion it needs a buff, as do many other Hunter (and Warlock and Titan) exotics in Destiny 2. The good ones should remain as they are, and the bad ones should get a buff to give players more trouble in deciding. With Young Ahamkara’s Spine, what about increases the blast radius or damage for the Tripmine? Maybe give players a second grenade? Something, anything, that gives it a chance to be an option for the Hunters out there.

Spend some time browsing through the Shacknews Destiny 2 complete strategy guide. You’ll find lots of information on all the activities the game has to offer, helping you make the most of each play session.

How to get a house - Temtem