More than a month before Crimson Days is expected to arrive in Destiny 2, one player dug through the PC files in search of any clues about the Valentine’s Day-themed event: and they found a lot worth talking about.

Reddit user Ginsor spent their time sifting through the Destiny 2 files that are currently stored on the PCs of players who have Bungie’s latest entry into the franchise installed. However, these files are often buried deep, have peculiar file names, and are otherwise challenging to find – like prospecting for gold.

As many players had feared, it looks like Crimson Days (lovingly dubbed Crimson Pays by the r/DestinyTheGame community) will have a whole lot of focus on Tess Everis, the vendor who mans the microtransaction and loot box shop in Destiny 2.

While everything in this world is subject to change, here are some of the items players might be able to get their hands on through loot boxes: 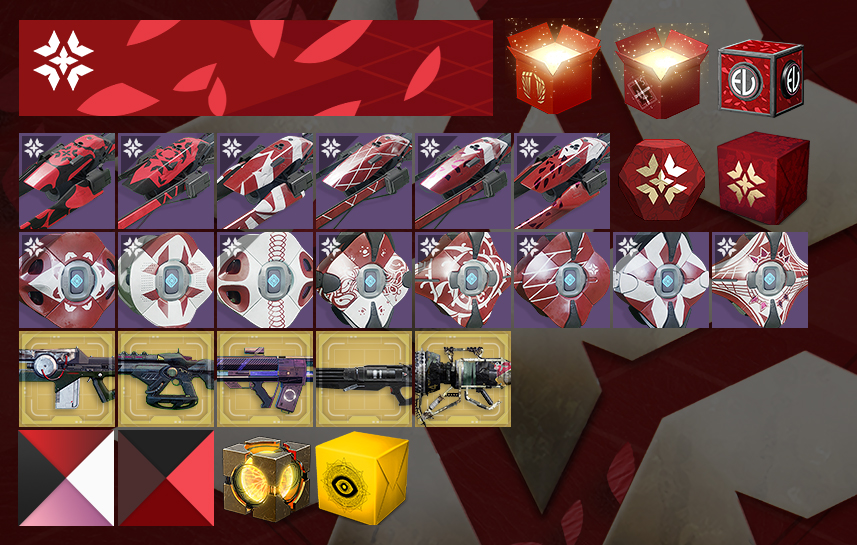 Thanks to reddit user Elevasce for putting together the above image.

The community is still reeling from Destiny 2’s latest money-grab event, The Dawning, where Bungie created two versions of the same shader, one that awarded Bright Dust and another that awarded Glimmer. For the most part, a lot of the highly-coveted items were locked behind the loot box system, of which only a few could be earned by actually playing the game. If players wanted a chance at getting the items they wanted through the loot boxes, the best way to do that would be to spend money on the RNG crates.

And now, only a few months later, it appears as if the trend will continue with Crimson Days. One of Bungie’s community managers, Cozmo23, was quick to respond to the reddit thread stating: “The rumors are True. Crimson Days is coming back. It won't be the same as last year time (2016). We will talk about how it is changing in the blog update on Thursday.”

So while Cozmo23 confirmed the existence and impending arrival of Crimson Days, there’s no word on exactly what the event will entail. But if the datamined information is anything to go by, it’s going to be another Eververse-focused event.

Bungie seems to be in the spotlight for all the wrong reasons when it comes to Destiny 2. While the December 5 Update and December 12 Update were well received, the community quickly deflated after the release of Curse of Osiris, an expansion that was met with unbridled criticism. After the three long years of making back lost ground with the original Destiny, the playerbase is at a loss over how it appears Bungie is making the same mistakes with the sequel.

With how Crimson Days is shaping up, for a lot of the remaining players, Destiny 2 might be the real Destiny-killer after all.

Let me know in Chatty what you think about Eververse. Are you tempted to make purchases in its current state?