Picking the right gun for a fight is a crucial strategy for Destiny 2, regardless of whether you’re playing in the Crucible or doing one of the many PVE activities. We’ve spent a lot of time battling the forces of the Darkness in Patrol, Nightfall, and the raids, and have come up with a list of the best PVE weapons in Destiny 2.

Keep in mind that your mileage may vary, and while the weapons below are top-tier, you might not like the "feel" of the weapons. But, if you're looking to make improvements to your build, definitely consider some of the following!

Your Kinetic weapon is likely going to be your most used gun out of all available slots, so it’s important to use a weapon that will get the job done. While guns not on this list work well, these are some of the best performing weapons right now.

Nameless Midnight has reached legendary levels of notoriety in the Destiny 2 community, coming close to that awesome Hung Jury Scout Rifle that Dead Orbit were selling back in the original Destiny. Commander Zavala gifts you the Nameless Midnight at the conclusion of the campaign, so be sure to pick it up once you kick Ghaul’s ass. 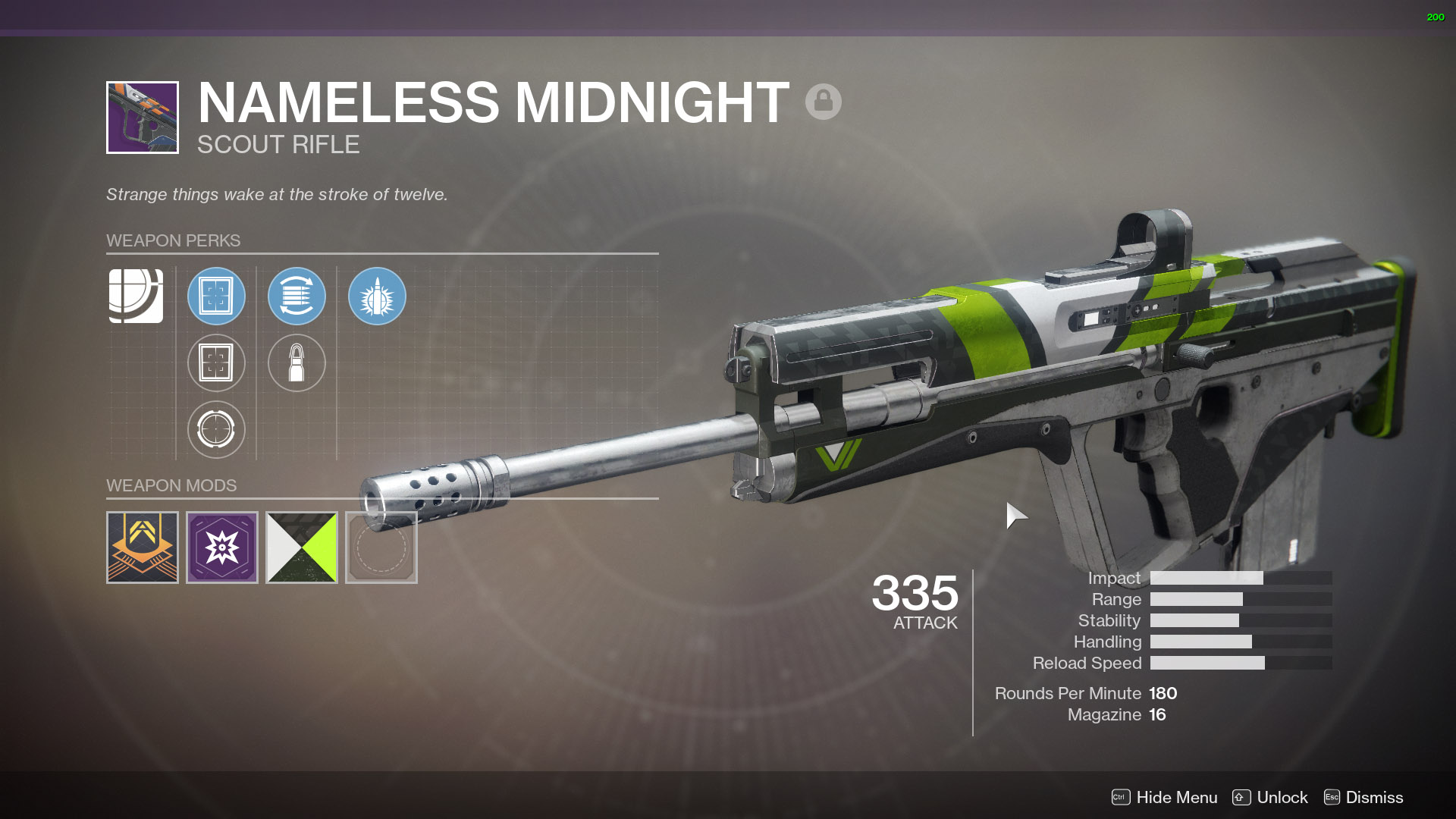 What makes Nameless Midnight so appealing for use in PVE is its stability, damage, as well as its defining perk: Explosive Payload. This final perk adds extra damage per shot and also allows you to deal damage to enemies around corners, despite it being a relatively small blast radius. 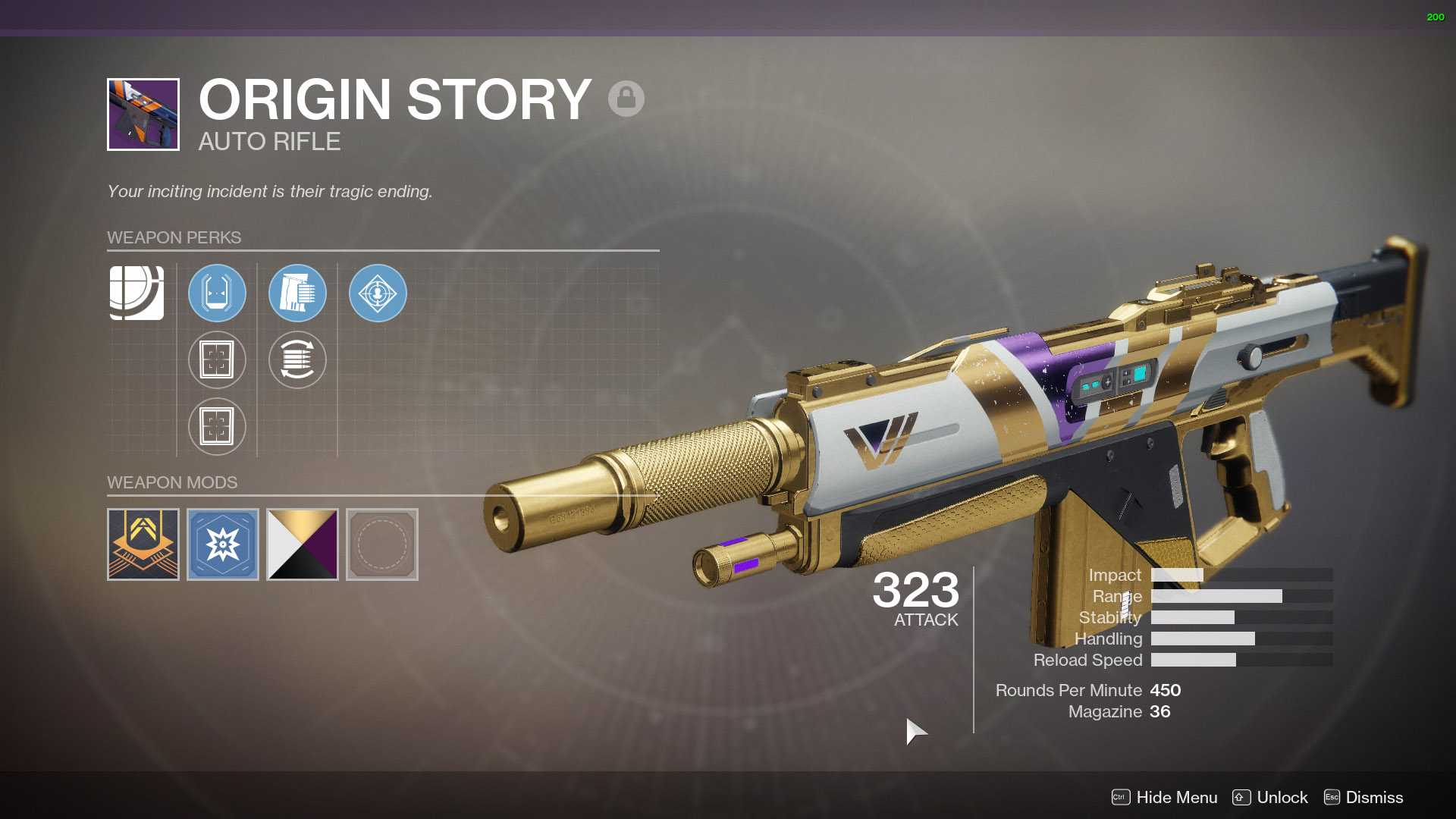 At the moment, if you’re looking for raw DPS on bosses, whether it’s in a Strike or Raid, you can’t look past an Auto Rifle, especially the 450 RPM variants. Origin Story is one of the three weapons you can choose from Commander Zavala as gifts upon completing the campaign, and while Nameless Midnight is the obvious choice, playing through on a second character and selecting Origin Story or even just earning Vanguard packages to try and attain one is a good idea.

While Better Devils is primarily used in Crucible, it can fit right into PVE play thanks to its high impact value and its Explosive Payload perk. More often than not, Better Devils will one-shot many low-level enemies and quickly dispatch some of the tougher yellow-bar adds. 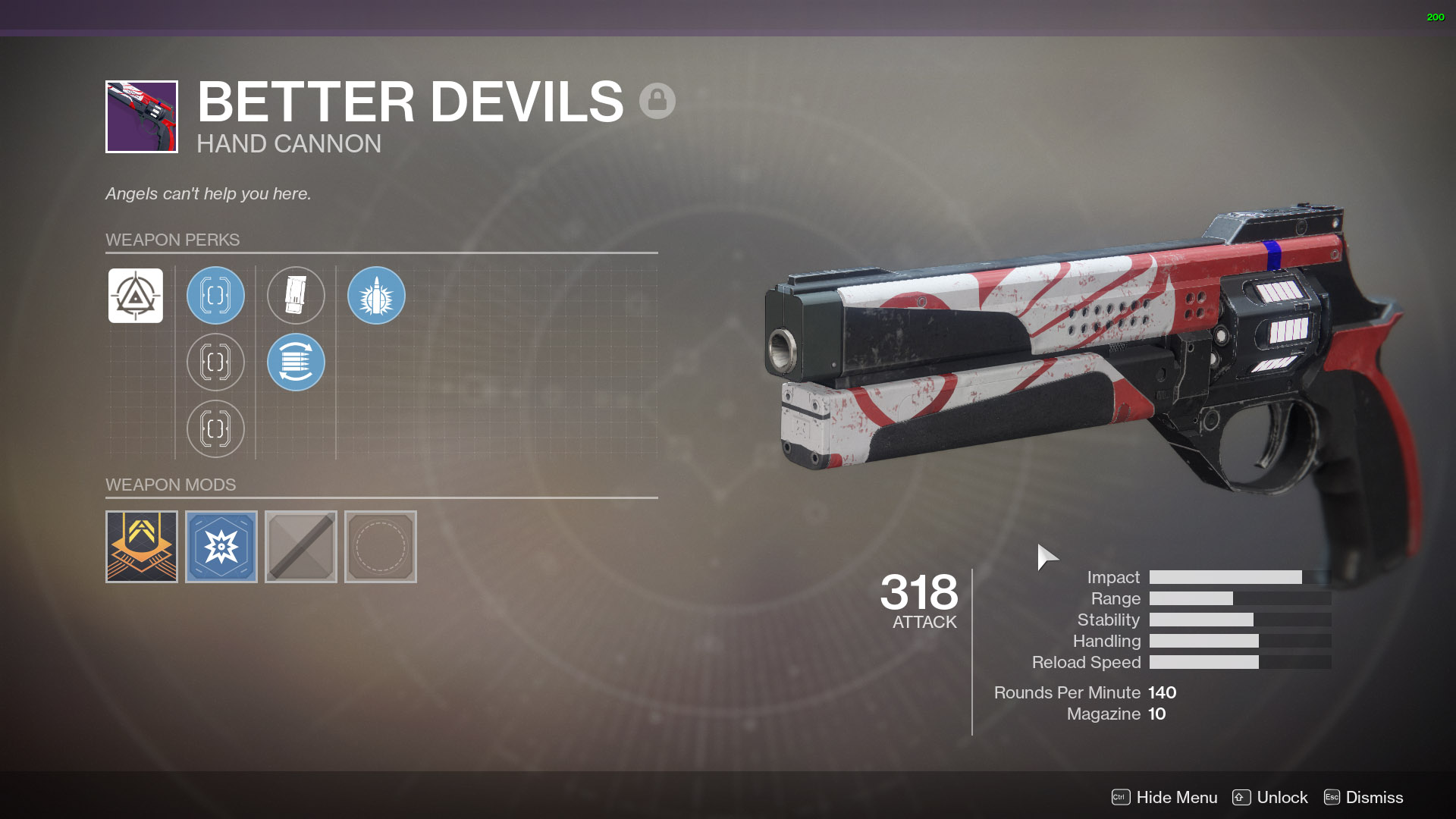 Acquiring this highly coveted gun is where you might run into trouble, as it’s typically only earned through Shaxx reward packages, though you might get lucky and receive it from a Clan engram or even a random Legendary Engram. Be sure to check out our guide on how to get Better Devils if you’re struggling get one.

Energy weapons are often just as critical to gameplay as their Kinetic siblings, which is why you should be using one that will give you the biggest bang for your buck. 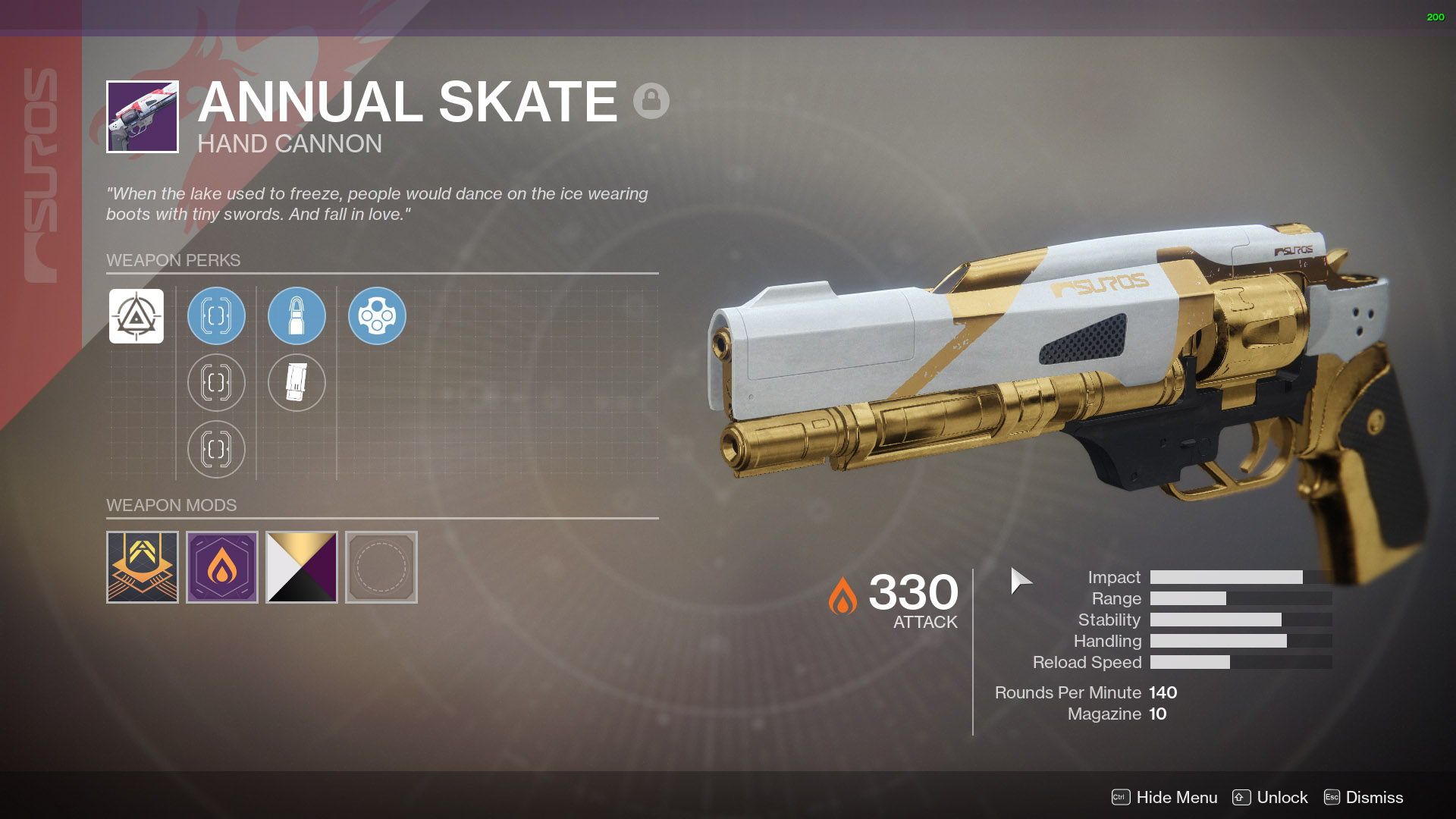 Annual Skate is a Foundry weapon, meaning it can be acquired from the Gunsmith. Due to its high stability, landing critical hits is easy with Annual Skate, which is excellent given its primary perk: Outlaw. The high impact value on Annual Skate means killing an enemy with a critical hit will occur either on the first or second shot, with yellow-bar enemies taking close to three to dispatch. 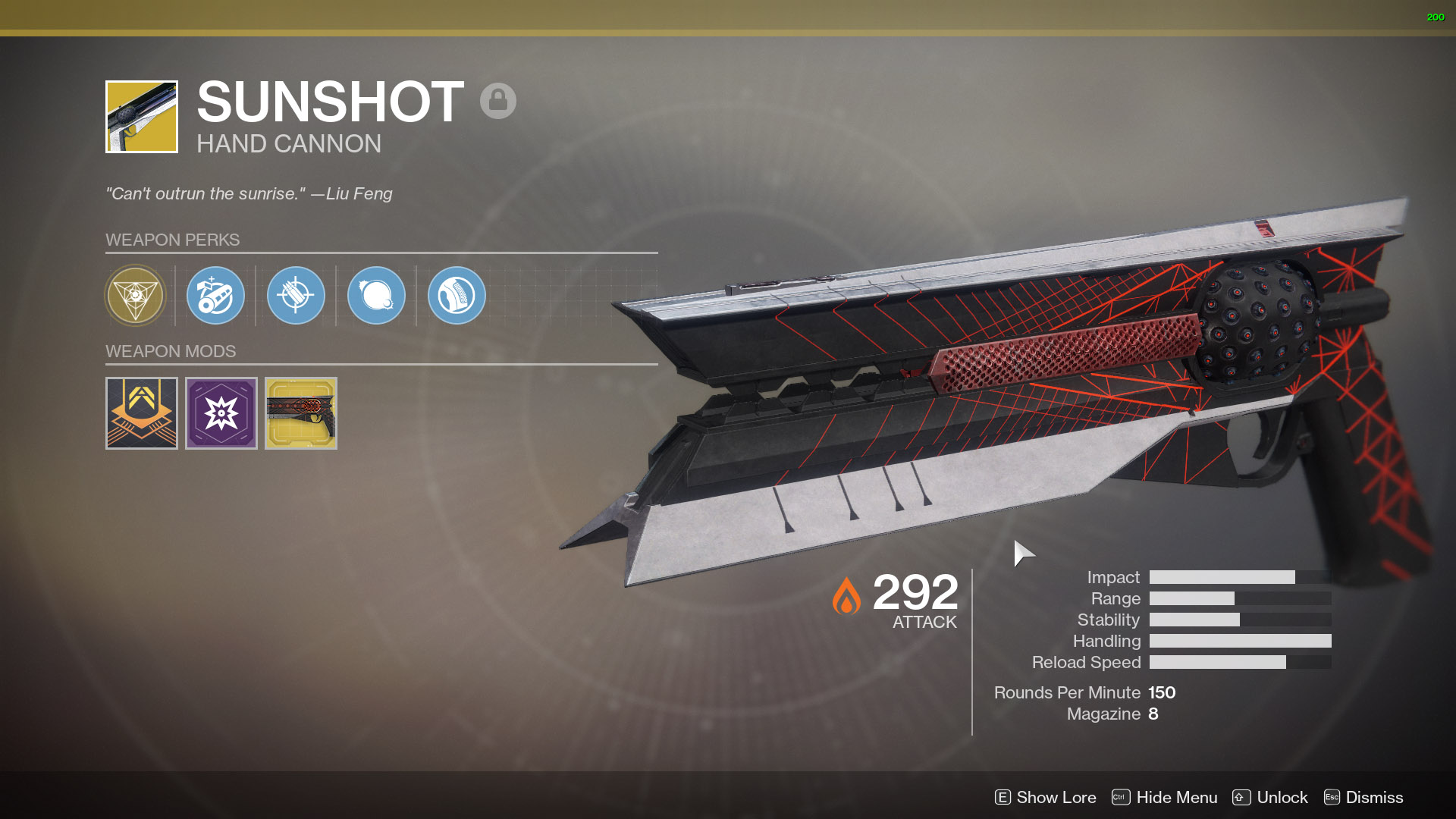 Sunshot is a storyline reward, so if you didn’t happen to take it, it can be collected on a second character. Though Sunshot mightn’t have the stability or impact of Annual Skate, it makes up for this with its Exotic perks: Sunburn and Sun Blast. Sunburn allows Sunshot to fire explosive rounds and highlights targets it damages while Sun Blast causes enemies to explode in Solar energy. It’s downright fun to use, but can also help with clearing rooms. 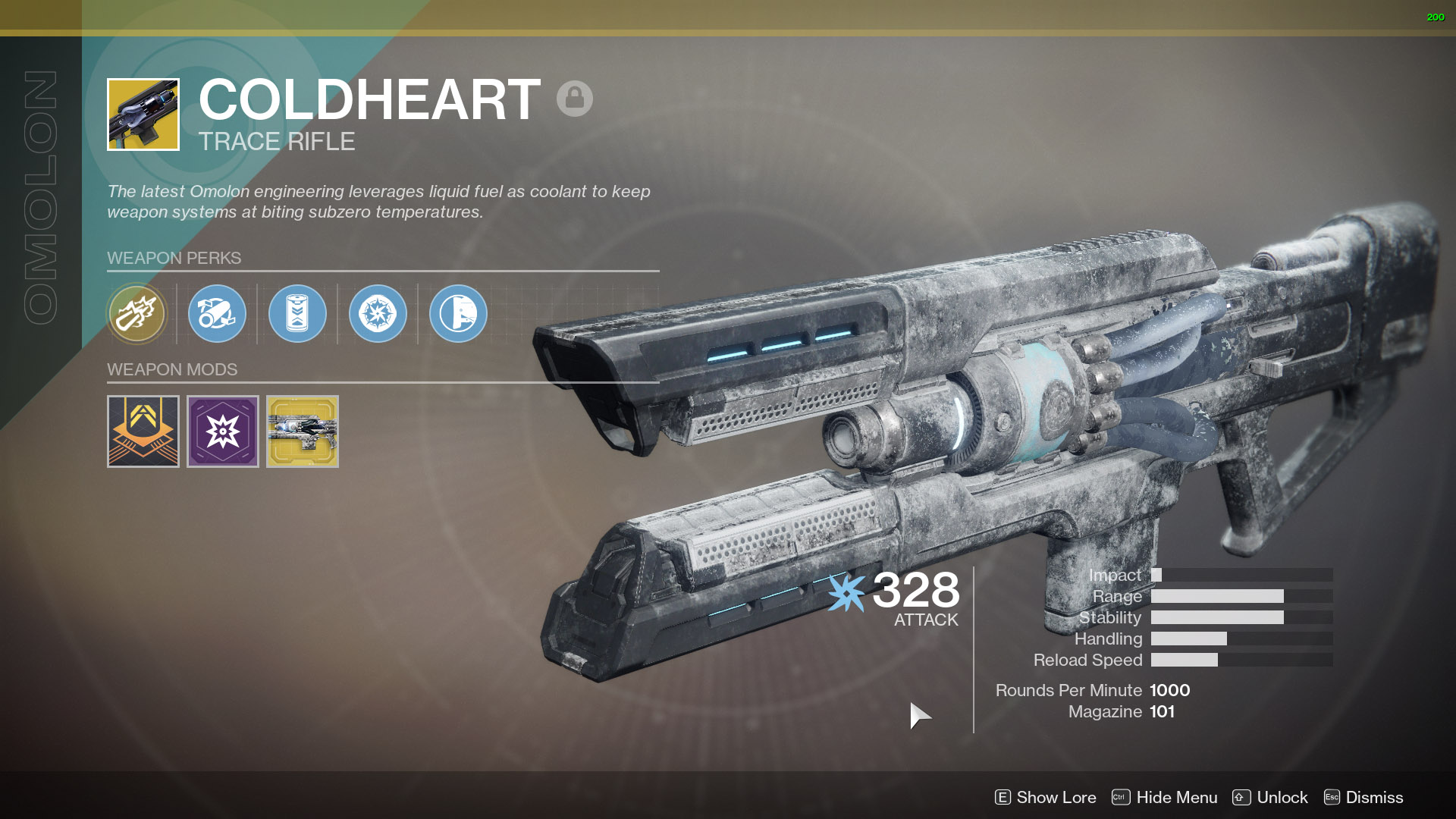 Originally only a pre-order bonus, Coldheart is now available to players who own Curse of Osiris. This new type of weapon, a Trace Rifle, fires a continuous beam of energy, but it’s Coldheart’s “Longest Winter” perk that really sells this gun as a DPS monster. Longest Winter makes Coldheart’s laser deal more damage the longer the beam remains on a target. Simply keep the beam on a boss’ crit spot and watch as Coldheart melts the health away. 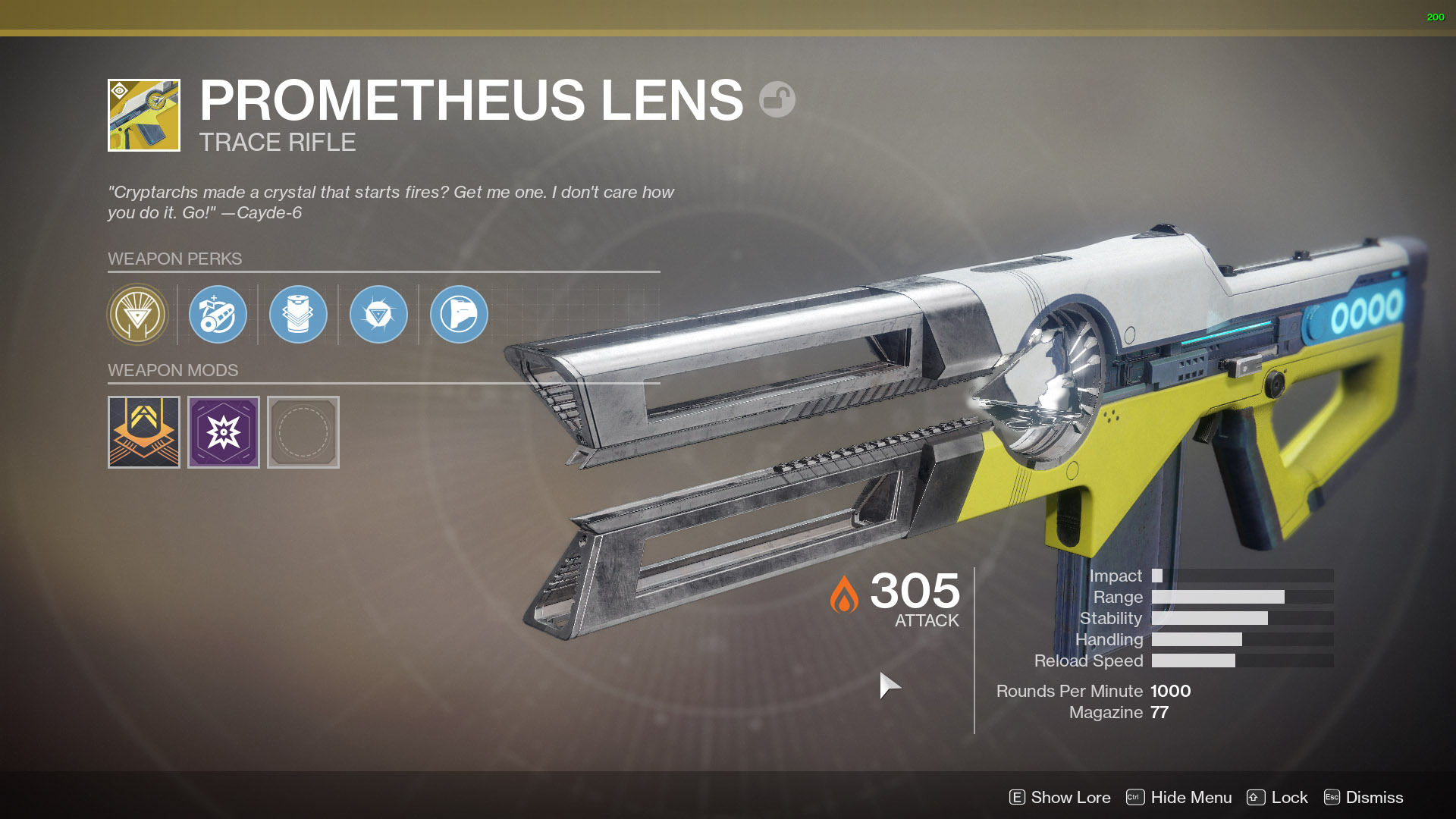 Oh, how the mighty has fallen. While Prometheus Lens has been hit with the nerf hammer a little too hard while Bungie adjusts it, there’s no denying its excellent add-control potential in PVE. Once the proper balancing adjustments arrive in early 2018, Prometheus Lens should be more capable of damaging groups of enemies in PVE without reducing Crucible to a game of instant-death laser tag. Try and get your hands on one and keep it in the Vault until Bungie gives it a nice PVE buff. 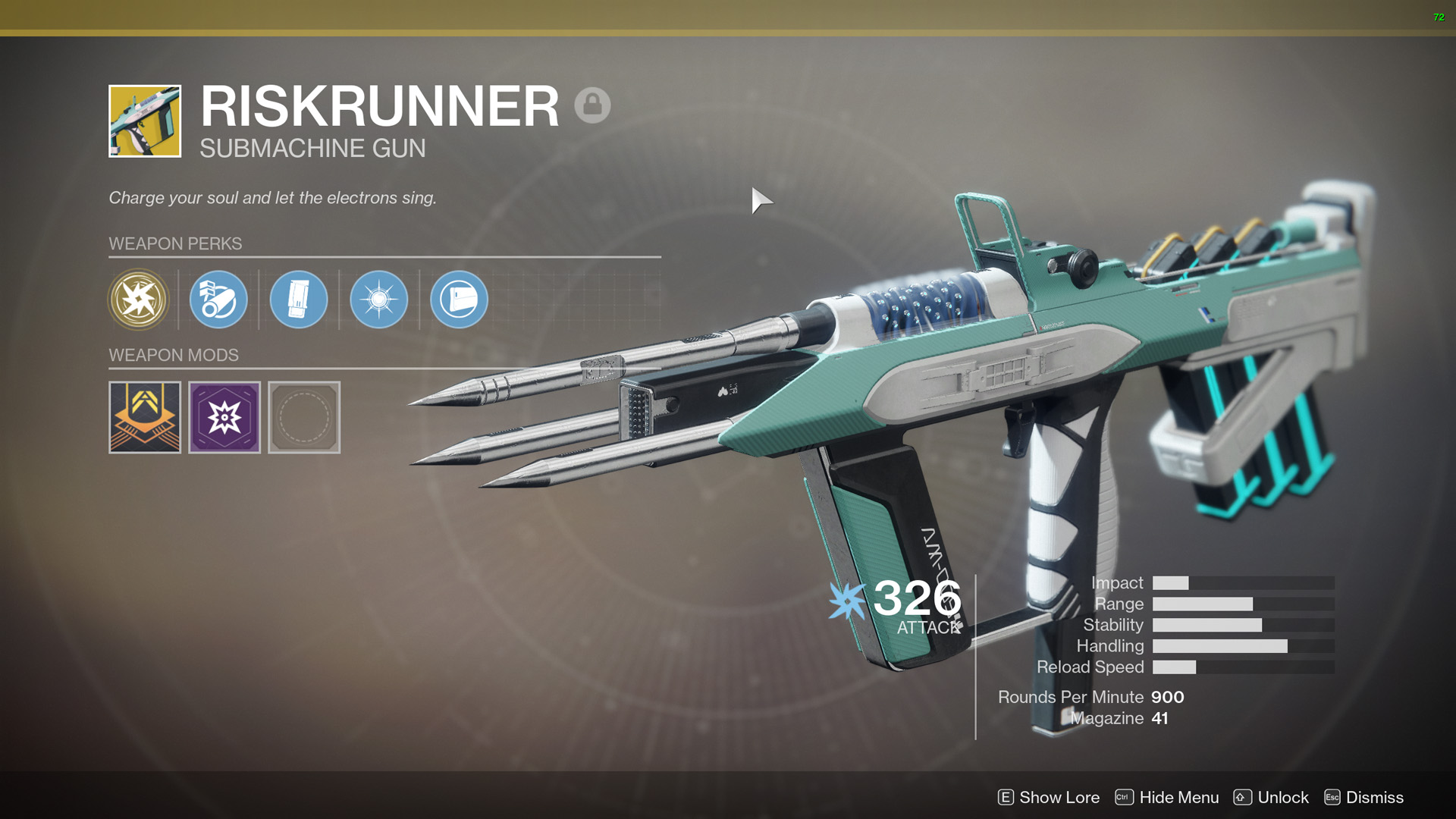 Riskrunner is another Exotic weapon offered as a reward at the same time as Sunshot – so it’s a toss-up as to which one to take. While Sunshot is often touted as the best option, Riskrunner has significantly more add-clear potential due to its excellent perk line-up. 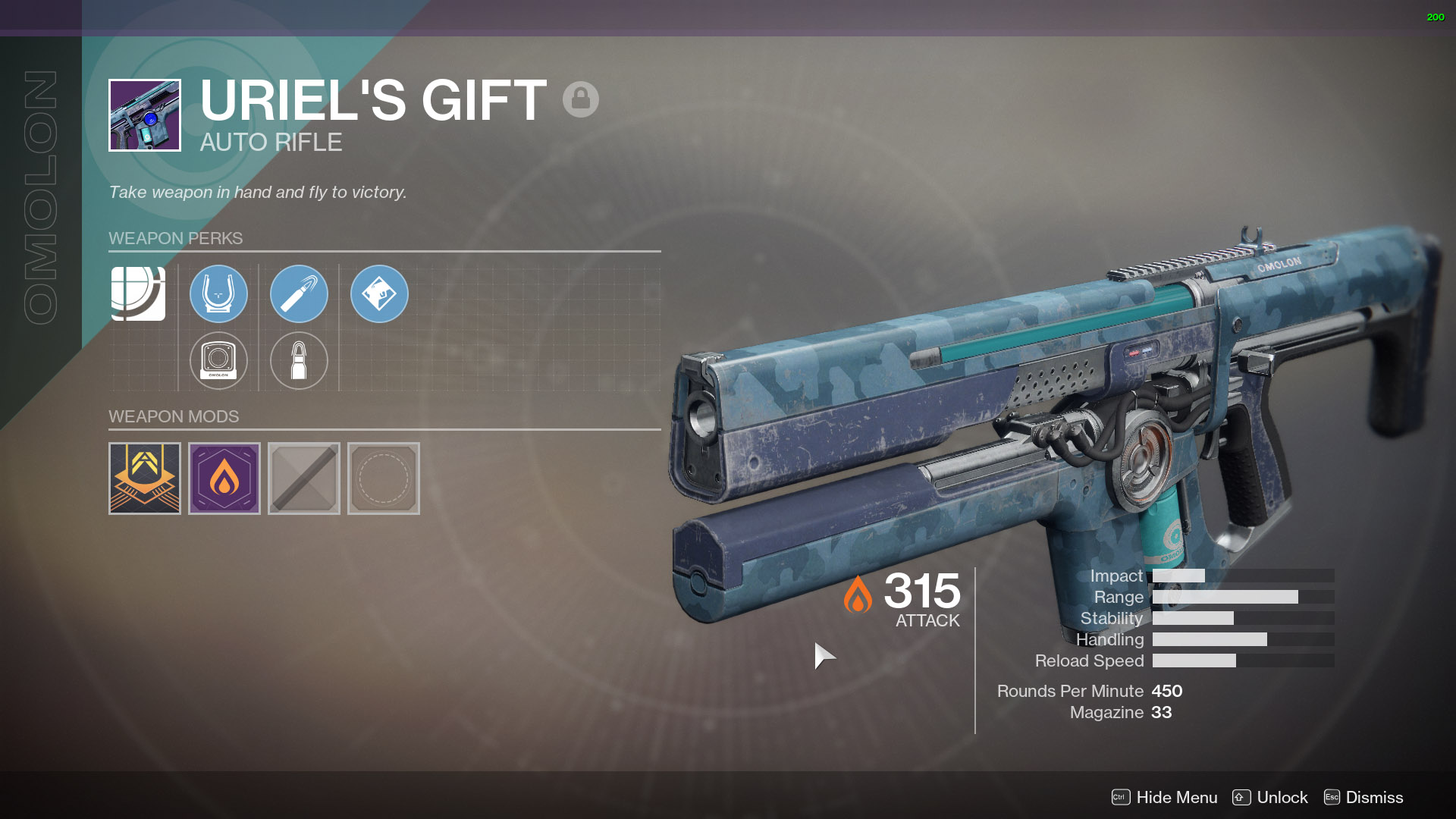 Uriel’s Gift is a great choice as a PVE weapon in Destiny 2 given its mixture of rate-of-fire and decent impact. Not only can it take down an enemy shield with ease (especially when matching elements) but it can deal impressive damage to bosses. There's not much to say about this classic Auto Rifle. 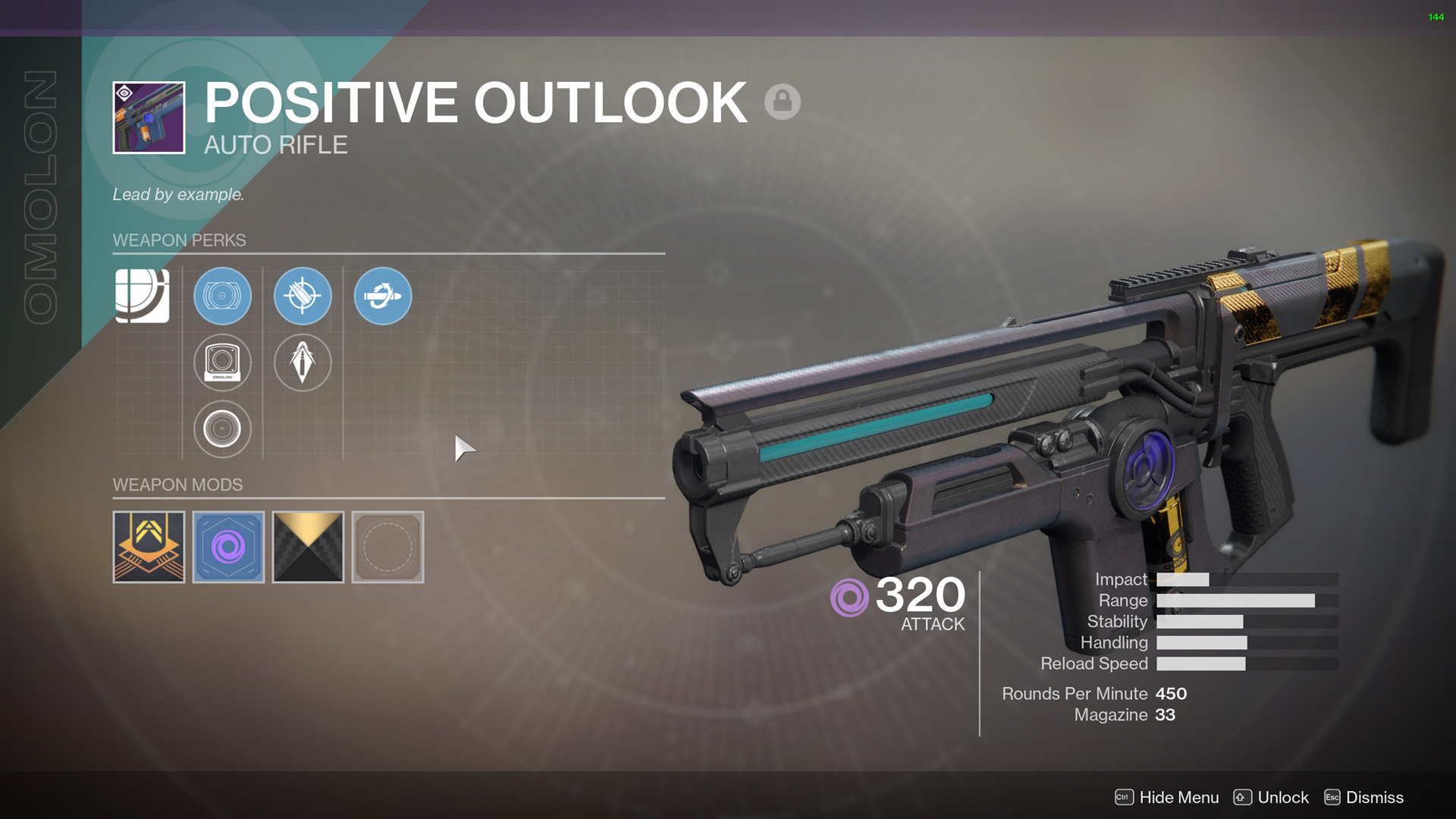 Positive Outlook might very well replace Uriel’s Gift as your go-to Energy Auto Rifle, especially with its primary perk: Kill Clip. Reloading after a kill increases the damage output of Positive Outlook – this makes it ideal when used against a boss who has smaller adds around it, such as during the Argos fight in the Eater of Worlds Raid Lair. 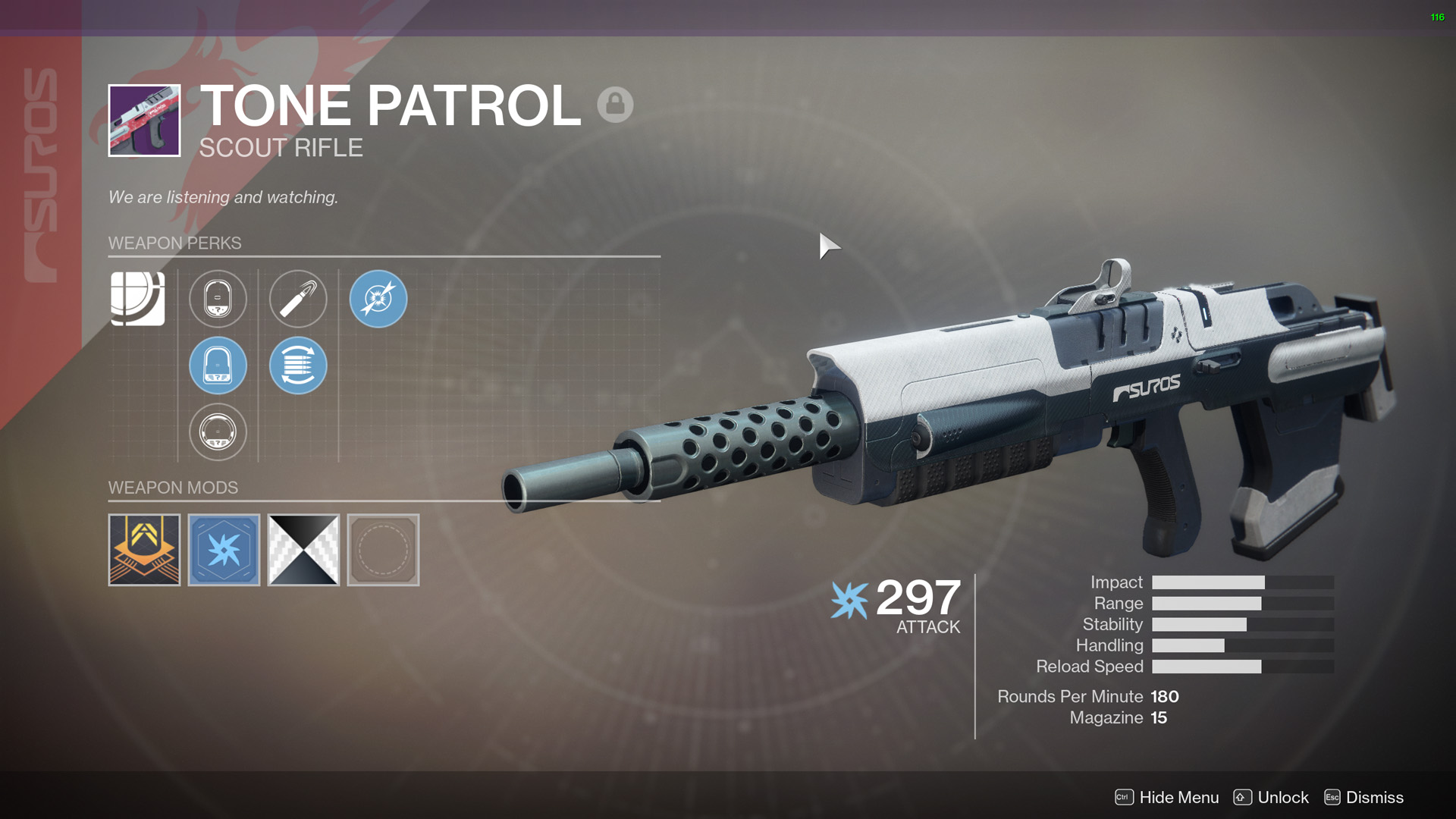 Though Scout Rifles tend to lack the necessary DPS in PVE, they do have a role for long-range fights, and this is where Tone Patrol shines. With a mean punch and reasonable stability, Tone Patrol allows you to deal impressive damage while at range. Its primary perk, Dragonfly, causes enemies to explode when killed with a critical hit, which grants some nice bonus damage to surrounding mobs.

Power weapons are your main source of high burst damage, and sometimes excellent DPS. Now that the only guaranteed way to get more Power ammo is through yellow-bar enemy kills, it’s hardly advantageous to use Power ammo against a swarm of reds, as your stocks aren’t resupplied.

Curtain Call / Sins of the Past – Rocket Launcher

Curtain Call is, hands down, one of the best weapons for PVE in Destiny 2, and should almost always be equipped in your Power weapon slot. What makes Curtain Call so great is its perk, Cluster Bomb, which spawns cluster bombs upon detonation. This perk alone makes Curtain Call able to deal astronomical amounts of damage to bosses and groups of enemies alike. 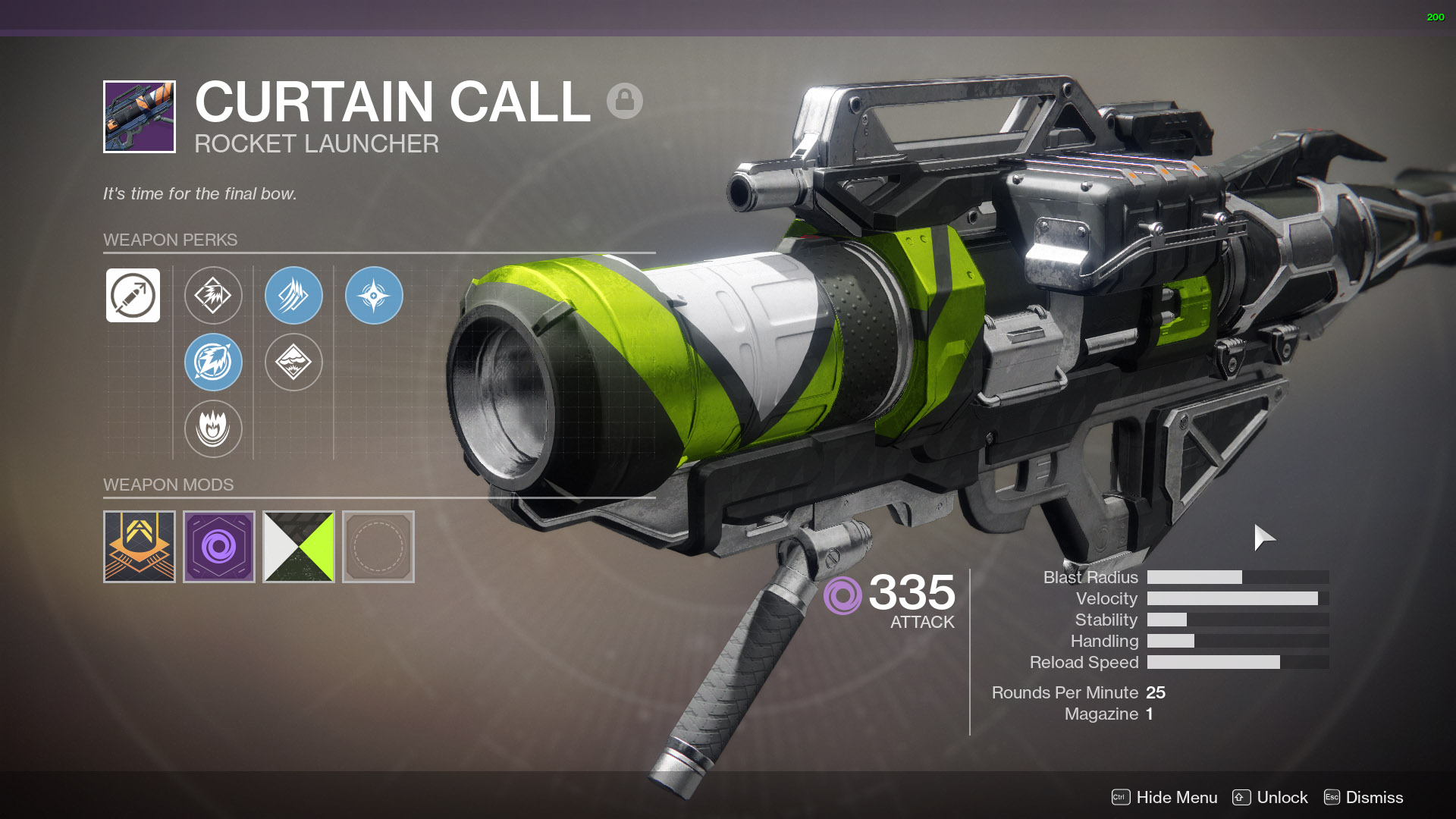 Beyond this, Curtain Call has a really high velocity rating, which increases the initial damage a rocket does when it hits a target (before exploding). Sins of the Past, on the other hand, has a slower rocket velocity. Always pick Curtain Call. 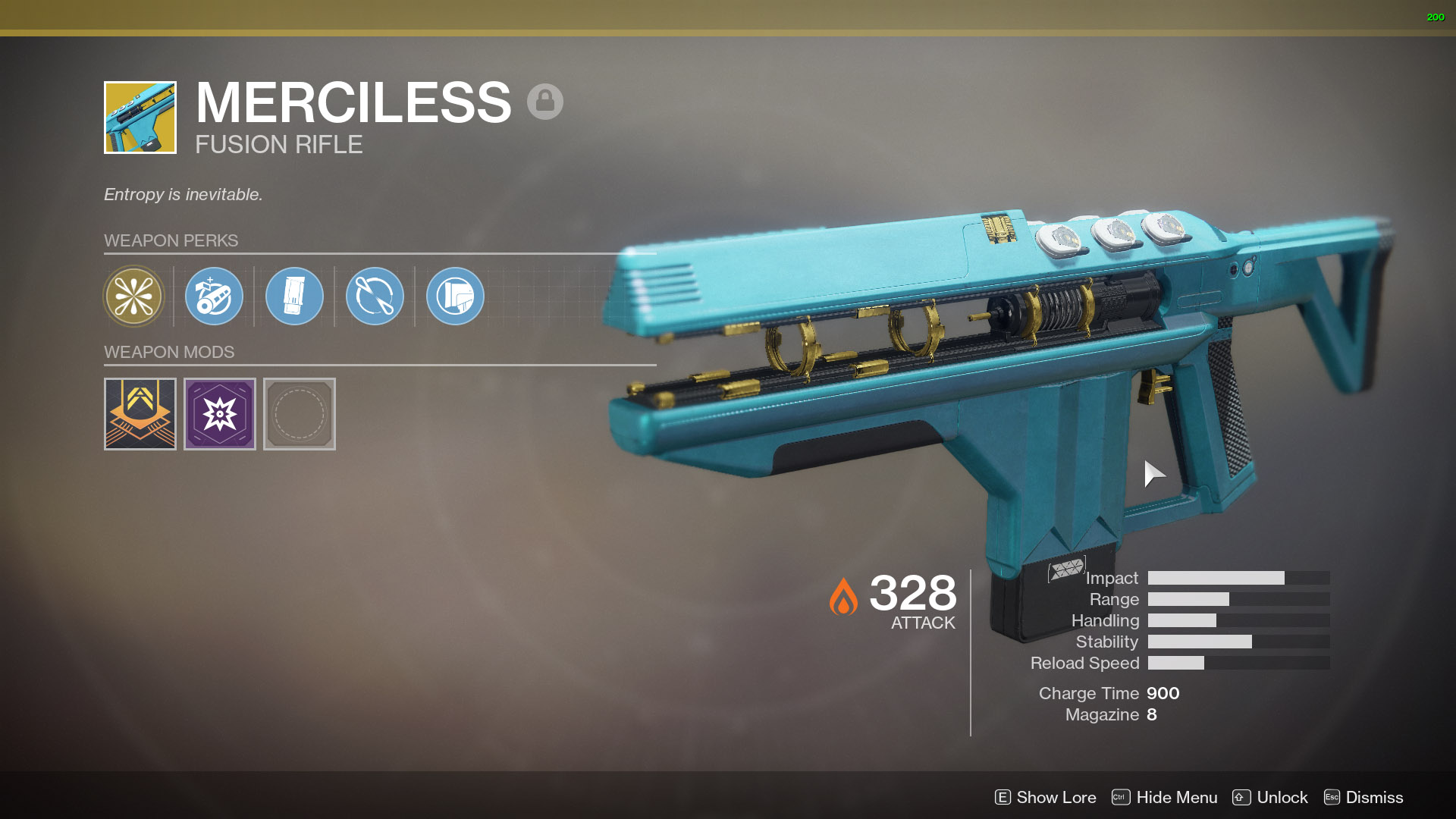 Fusion Rifles are in an odd spot in Destiny 2, as it’s almost never a good idea to use them when you could opt for a weapon that is guaranteed to net you a kill, however, Merciless is an exception. The spiritual successor to Pocket Infinity, Merciless’ main perk, Conserve Momentum, grants the Power weapon some outlandish DPS potential. With Conserve Momentum, non-lethal hits with projectiles increases Merciless’ charge rate. For every shot that doesn’t kill an enemy, the next shot takes less time to charge.

When used in the Royal Pools section of the Leviathan raid (especially in Prestige), Merciless can quickly shred a Bather down to nothing in seconds. 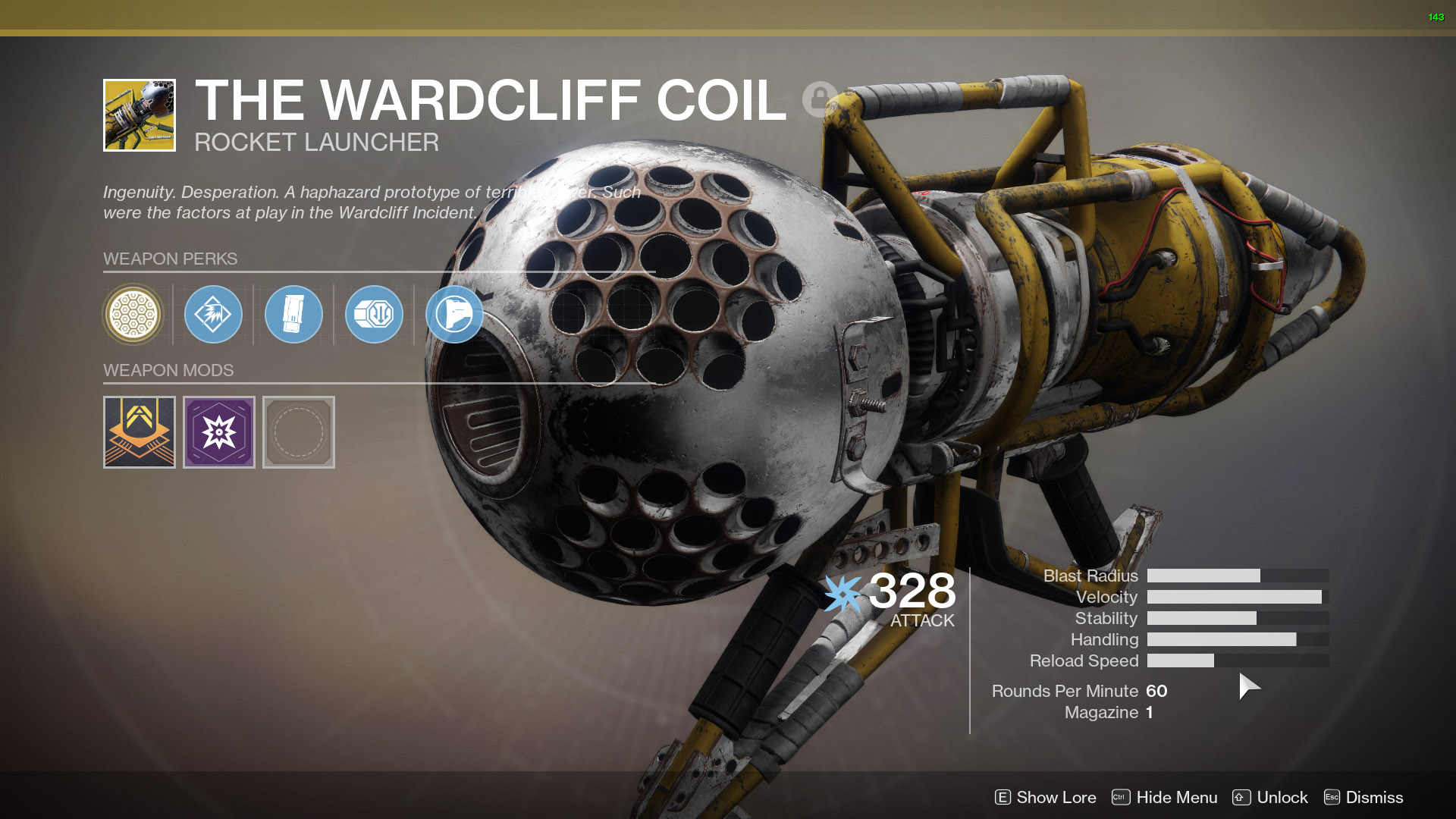 The Wardcliff Coil, initially thought to be Dubious Volley in the original game, finally made its grand entrance in Destiny 2, and what an entrance it made! The Wardcliff Coil is an absolute must for a lot of end-game activities in PVE such as the Prestige Nightfall and even the Prestige Leviathan raid. What makes it so important is its impressive damage output against shielded yellow-bar enemies.

When used in the Castellum section of the Leviathan raid, The Wardcliff Coil can almost one-shot a Standard Liberator, while in the Prestige Nightfall, it can definitely one-shot a fully shielded yellow-bar Wizard.

It might not be as powerful as the mighty Gjallarhorn, but The Wardcliff Coil is making a name for itself in the community.

A worthy addition to the list of best PVE weapons in Destiny 2 is Hawthorne’s Field-Forged Shotgun. If you can’t get your hands on Merciless or The Wardcliff Coil, Hawthorne’s shotgun is your next-best option for close-range combat. 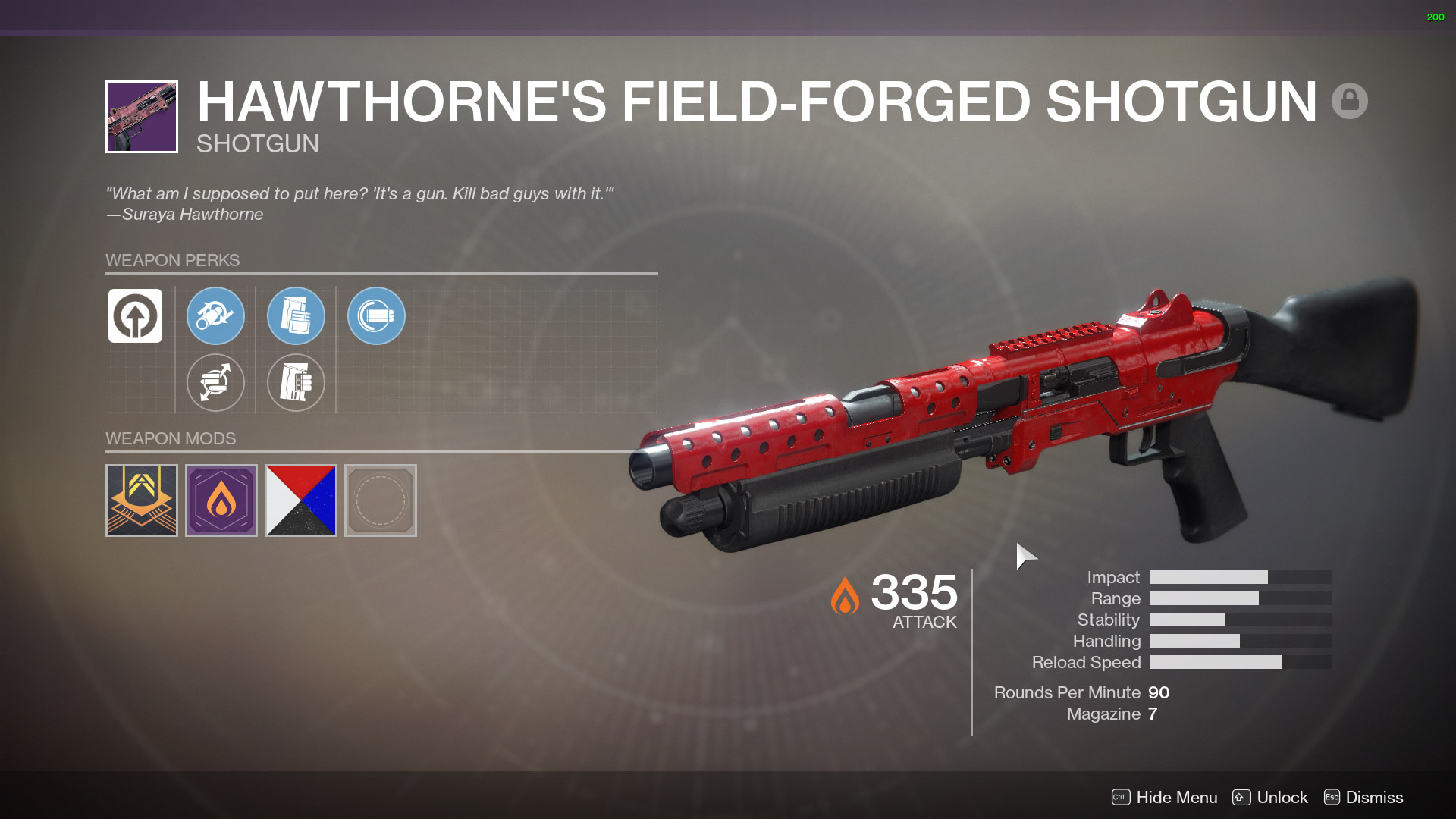 The perk, Full Auto Trigger System, is exactly what it describes: a fully-automatic shotgun. To make it even better, this shotgun has a fast rate-of-fire, making the automatic function even more potent. For the D1 veterans out there: while it’s not Fourth Horseman levels of speed, it’s probably closer to Invective. For the D2 players: get Hawthorne’s Field-Forged Shotgun and eviscerate your enemies. 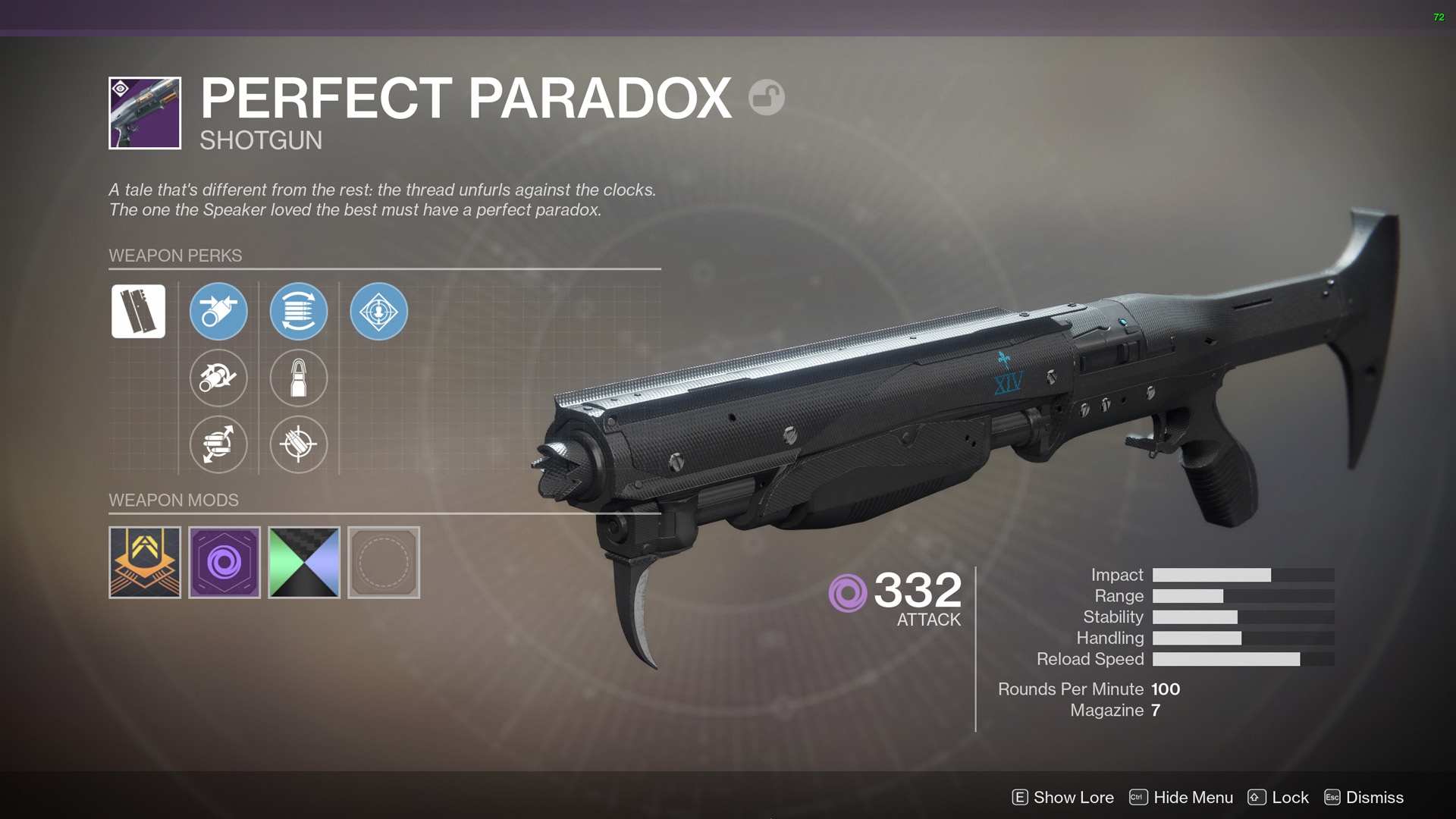 Perfect Paradox is a new addition that came with Curse of Osiris, and it’s a tricky shotgun to actually acquire. However, if you can get your hands on Perfect Paradox, it’s just a better Hawthorne’s. It offers a higher rate-of-fire, fully-automatic firing, and Rampage – which increases damage output up to three times for every kill you get. Once you get this, you can easily stow Hawthorne’s shotgun in the Vault.

At the end of the day, if you’re finding your current weapons are doing the job, there’s no harm in continuing to use them, especially if you like them. However, if you’re looking for the top-tier PVE weapons in Destiny 2, definitely consider tracking down some of the weapons on this list – your DPS potential will thank you. Make sure you take a look at our Destiny 2 Complete Strategy Guide for more tips and suggestions.