Out of the four Exotic weapon quests in Destiny 2, the Legend of Acrius takes the cake for being the most challenging and time consuming. Part of this quest line is to complete the Arms Dealer Strike on the EDZ through a specific banner on the map. Make sure you come prepared with a Fireteam of three players, because it is not easy!

The Arms Dealer Quest is tied to the Await the World-Eater Exotic quest and can only be attempted after you have completed the previous steps. To begin the Arms Dealer Strike, you will need to head to the European Dead Zone and activate the blue banner near Firebase Hades, this starts up a special Power 300 Strike that has the Anomaly and Prism modifiers active.

Anomaly – Blue Vex boxes spawn in specific locations throughout the Strike, destroying them adds 30 seconds to the timer. 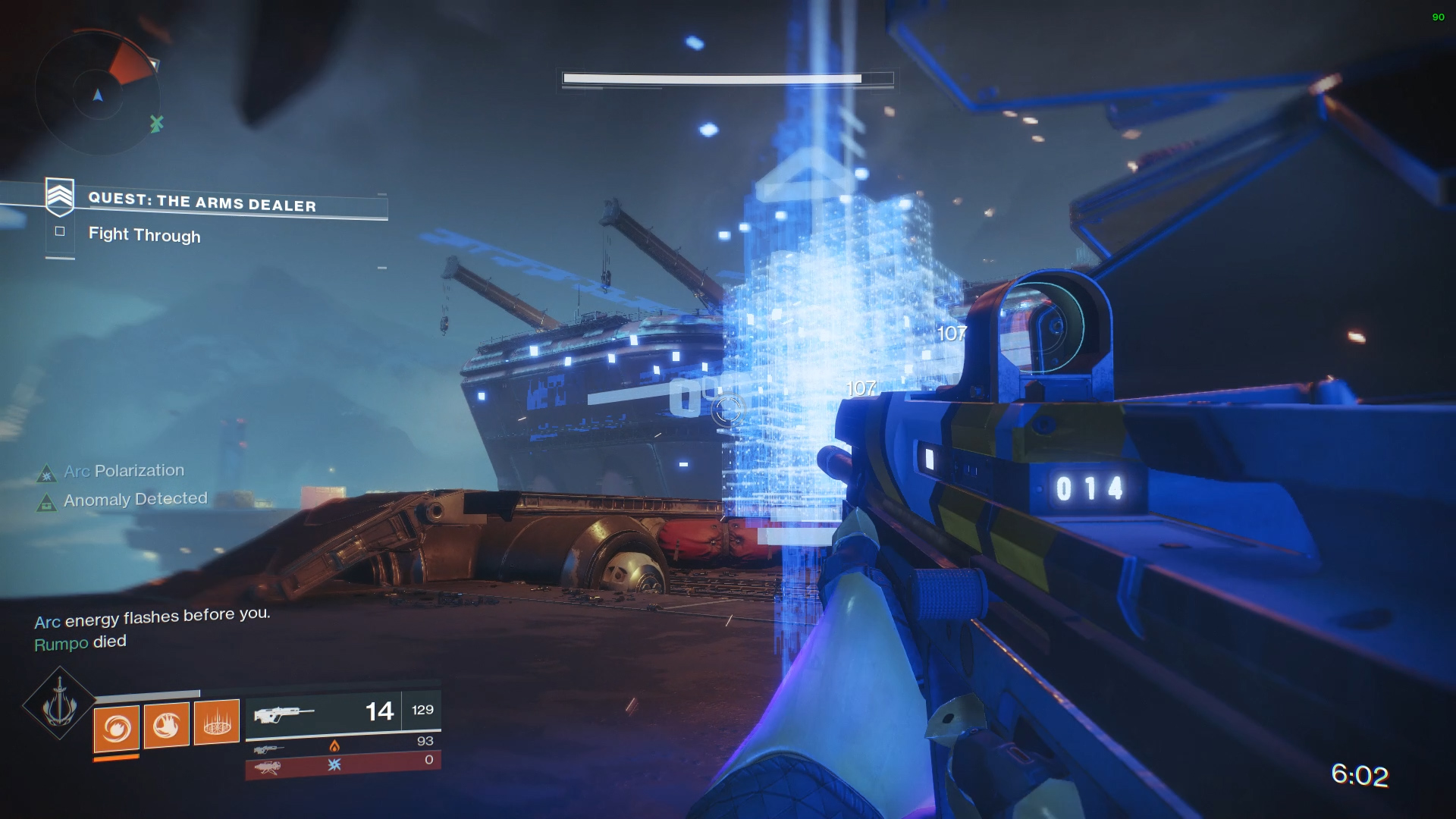 Before you load up the Strike, ensure your Fireteam has a good spread of elemental damage, because once the Strike is activated, your loadouts will be locked, preventing you from selecting a different weapon mid-run.

To complete the Arms Dealer Strike, you will need to balance killing enemies, finding Anomalies, and moving through the mission at a considerable pace. Every Anomaly you destroy will add 30 seconds to your timer, up to a maximum amount of time. If you see a message appear telling you the maximum time has been reached, stop killing Anomalies and focus instead on killing enemies. 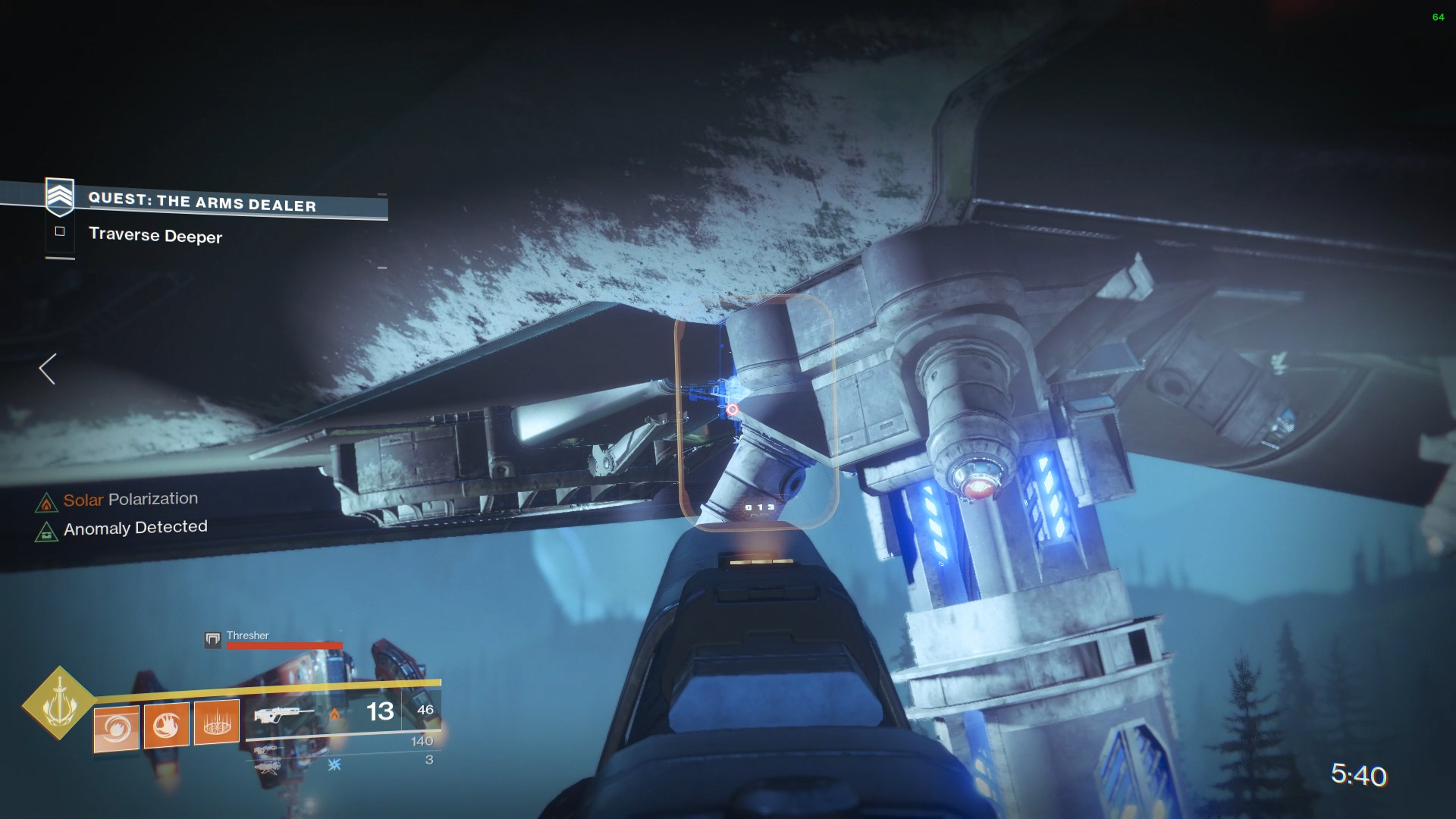 As a group, you will want to keep updating everyone on when the elemental damage changes, that way no one is wasting precious bullets, abilities, or Supers when their element types don't match the currently active element burn. By using weapons that match the element burn, you can quickly dispatch any enemies you might encounter. 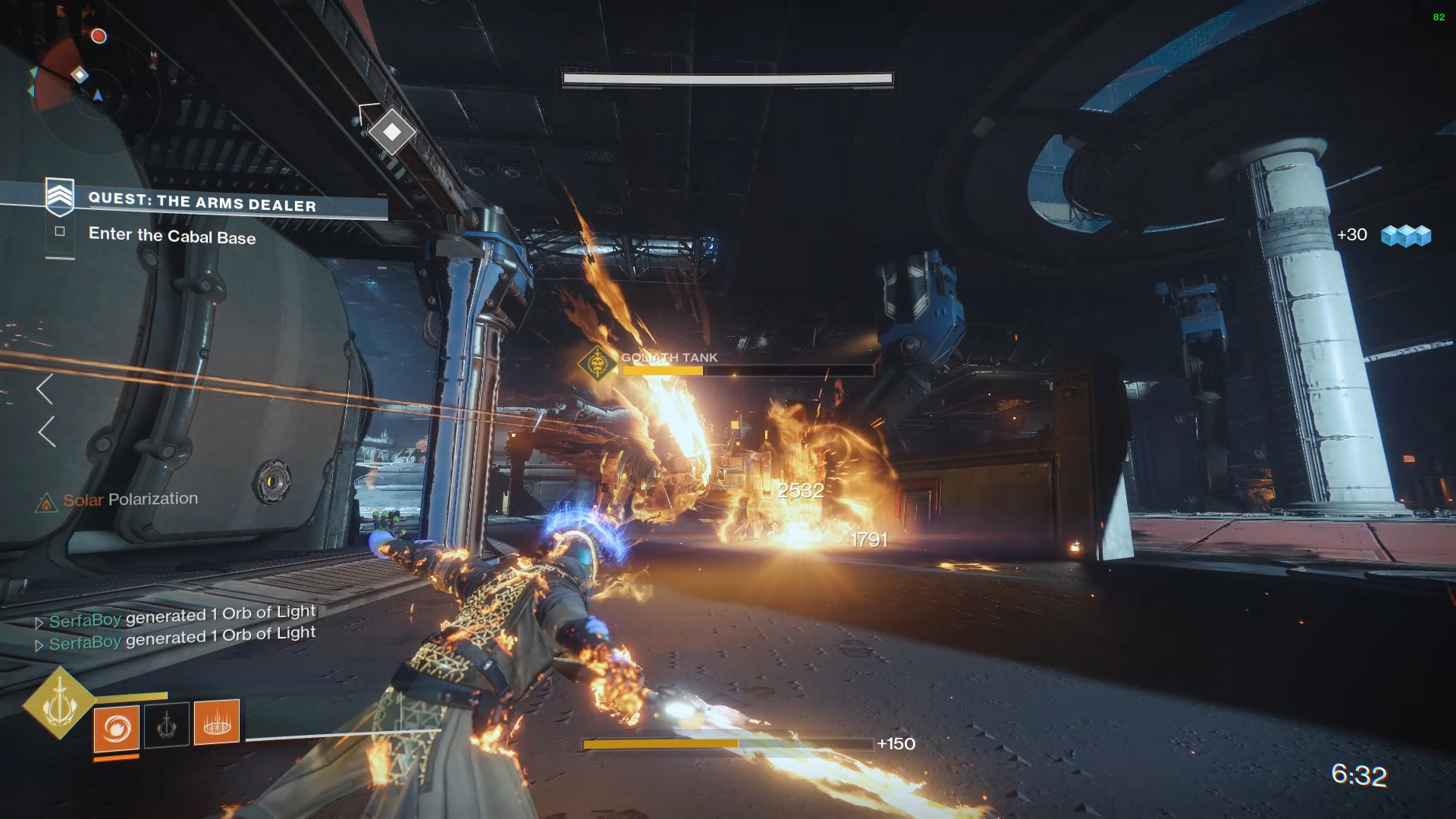 As for the Anomalies, they spawn in set locations every time you run the Arms Dealer quest, so learning where they spawn will make subsequent attempts easier. There are four locations where Anomalies spawn in high density:

The Anomalies are often found hidden in corners, over edges, or behind walls you could easily miss as you run past. A good idea is to keep an eye out for the faint blue glow that light up the areas around an Anomaly. 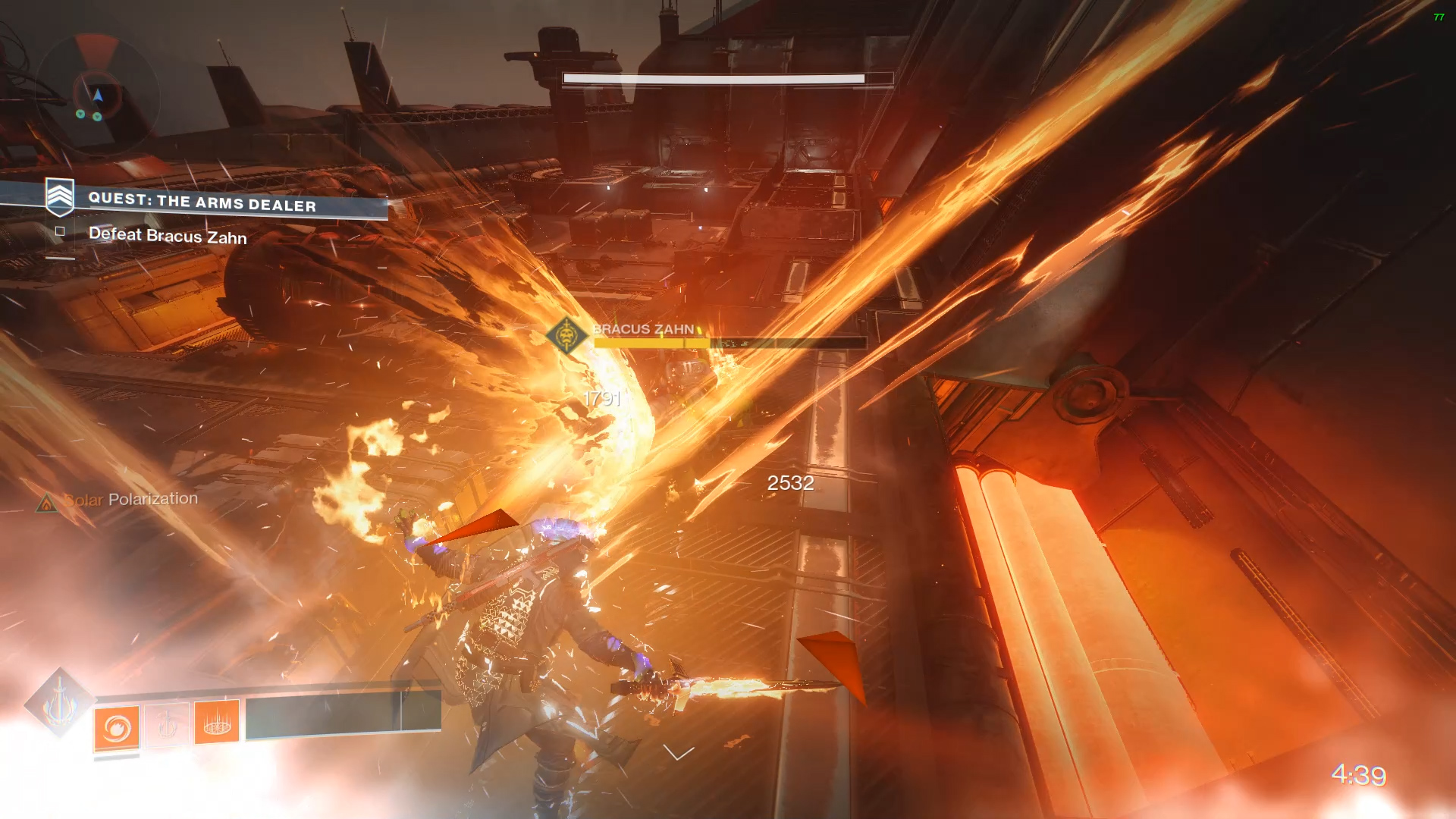 Aim to have roughly 7 minutes on the clock by the time you reach the top of the elevator, as this will give you some wriggle room in case you get overrun by enemies.

When you reach the top of the elevator and are facing Bracus Zahn in the final arena, hold off damaging him until all his turrets are dead. After the turrets are dead, consider waiting until the right elemental damage appears, that way you can deal considerable damage to Bracus Zahn before he hides on his tower. For instance, if the majority of your Fireteam is using Solar-based Supers, wait until the Solar elemental damage appears and then use your Supers. 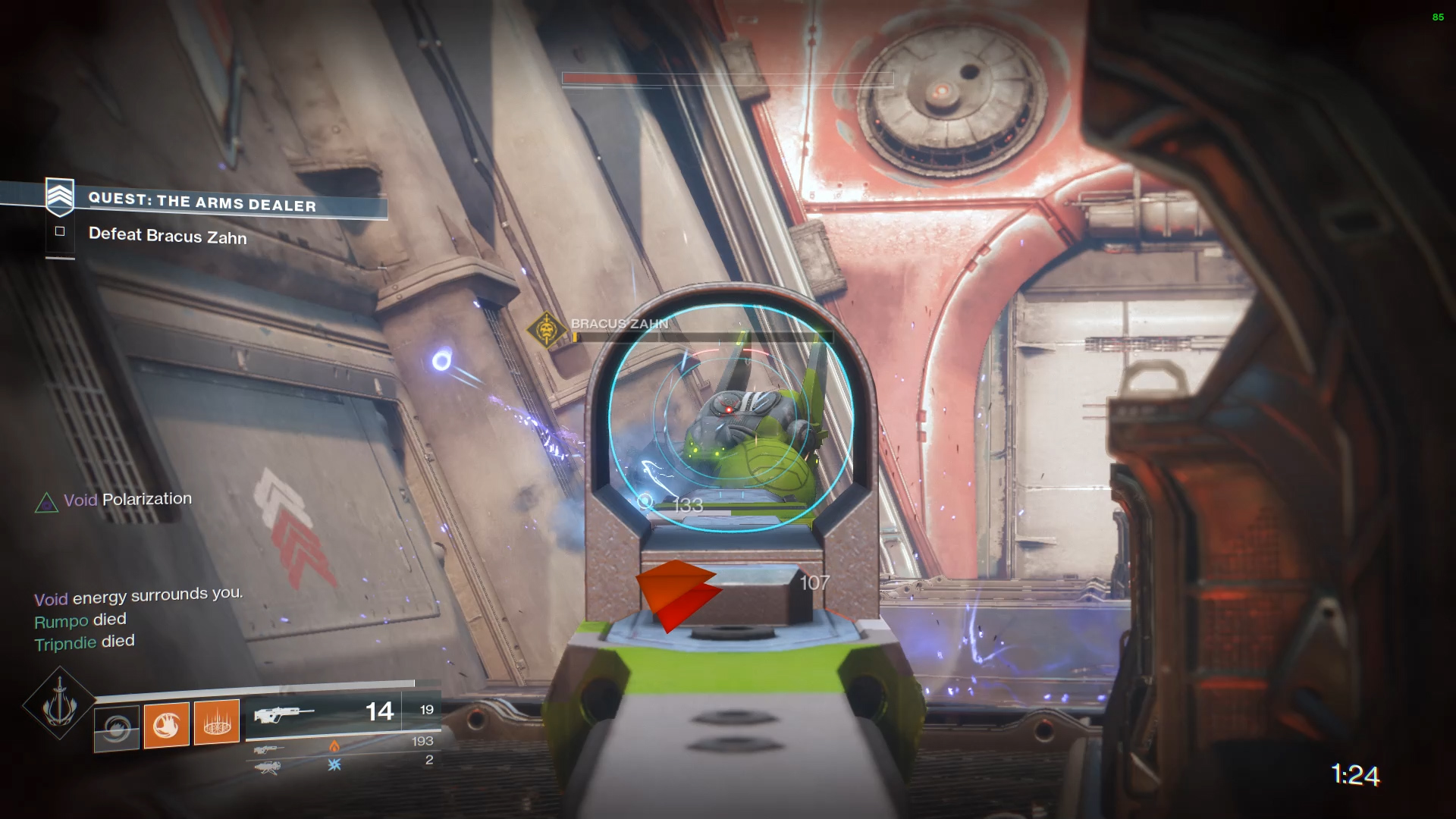 While Bracus Zahn is up on his pillar and immune, clear out the enemies to make it easier to dunk the core. If there are too many enemies alive, it can be easy to get stuck in a cycle of spawning and dying. After dealing enough damage, Bracus Zahn will die and you will have completed the Arms Dealer quest, progressing your weapon quest further.

The Arms Dealer quest in Destiny 2 is notoriously difficult, thanks in part to the time constraints. By managing the amount of enemies alive and focusing on destroying Anomalies, you and your Fireteam should be able to take down Bracus Zahn and move onto the next section of the Legend of Acrius questline. Be sure to check out our Destiny 2 complete strategy guide for more hints, tips, and walkthroughs!