Destiny 2 - What Class Should You Create First?

Destiny 2 gives players three options for classes to play with. Each of those classes comes with three subclasses that can be swapped out for another at any time. Because your first character in Destiny is going to be your main for at least the first 15 to 20 hours, it’s important to choose one that suits your style of play and allows you to be an effective fireteam member. Today, I’ll look at the Hunter, Warlock and Titan classes in Destiny 2, and help you decide which to create first.

Before I get to deep into it, it’s important to understand a few things about classes and subclasses. For example, the three classes are your identity. Within each class are three subclasses that you can swap between once you’ve unlocked them all. These are more like your personality. Class abilities are not unlike talents, and these are class specific. For example, Hunters have the Marksman’s Dodge and Gambler’s Dodge. Even if I swap subclasses, those are the only two abilities I can choose from. 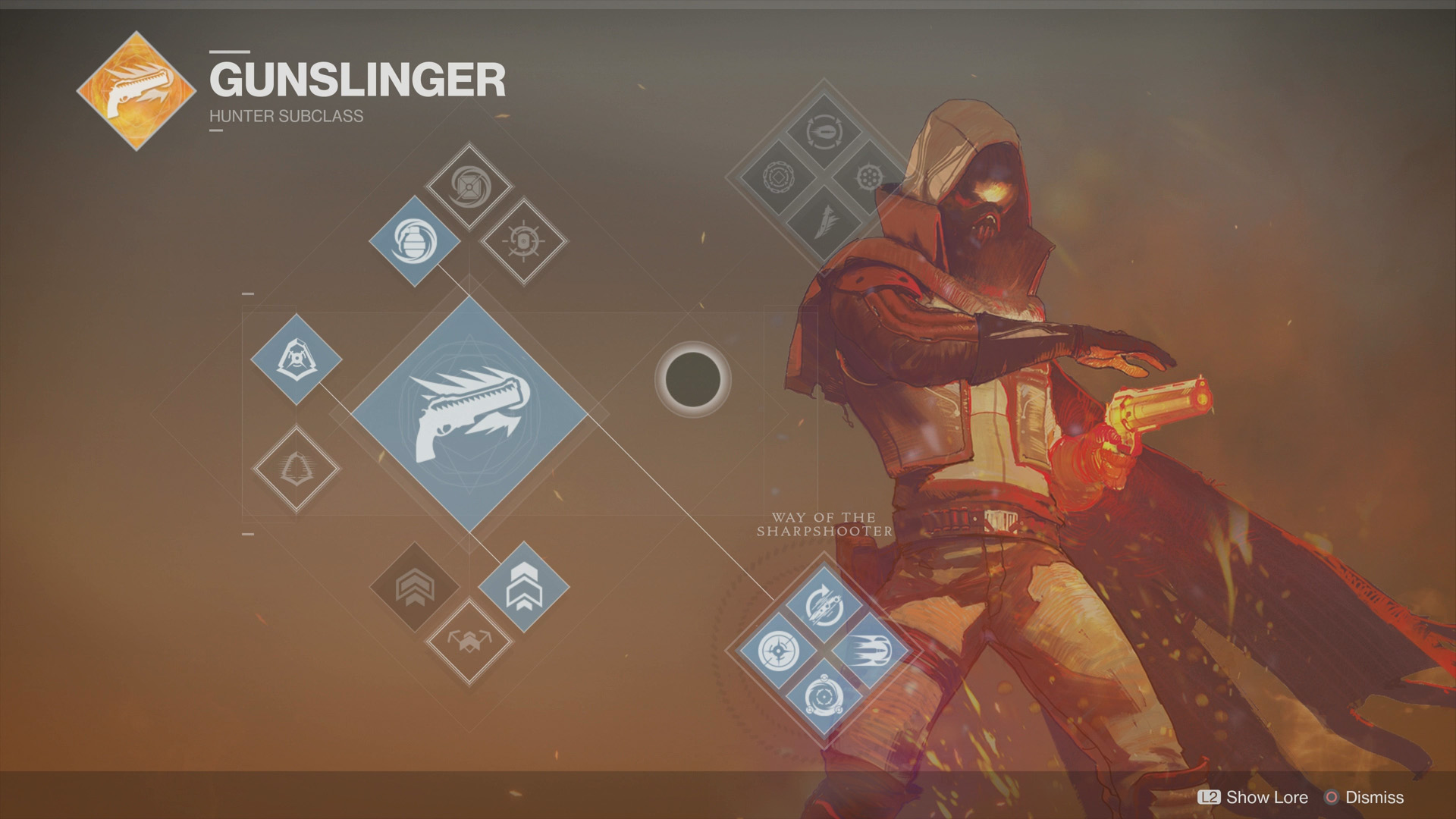 The Hunter class is my personal favorite, and is known primarily for its agility. If your style of play is to stay on the move to avoid damage and unleash attacks, the Hunter is the class for you. In Destiny 2, though, I would say that the Hunter suffers from being slightly underpowered in many ways. This will be most noticeable in the Crucible, Destiny 2’s PvP environment.

The Hunter comes with three subclasses; Gunslinger, Arcstrider and Nightstalker. Each class has its own merits and, while I’m not doing a full subclass breakdown here, each one can shine in the right situation. The Hunter class ability is Marksman’s Dodge or Gambler’s Dodge. It’s basically a side-step to help you reload, or to recharge your melee ability.

Gunslinger is the default subclass and the Super Ability there is the Golden Gun. It fires three bullets that should one-shot your enemies in the Crucible (not always), and is good for dealing focused damage on a boss in PvE. It’s great for Calus, the boss in the Leviathan raid that you’ll eventually wish to challenge. It’s a niche subclass though. 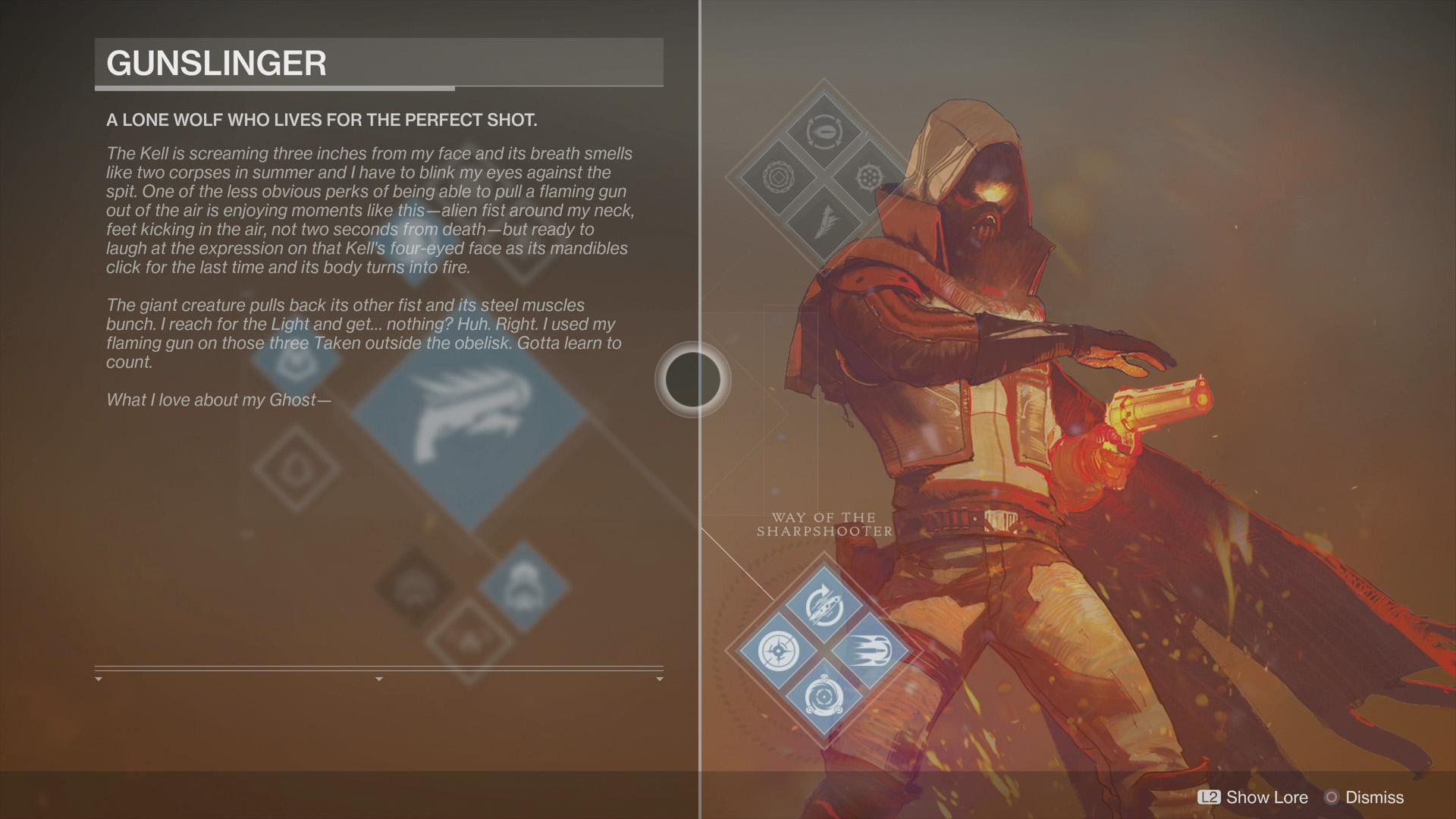 The Arcstrider subclass is new to Destiny 2, but its Super Ability, Arc Staff, is a watered-down clone of the Arc Blade that was deadly for Hunters in the original Destiny when used in PvP. In a nutshell, you get an Arc Staff that you can use to melee enemies in close proximity. I’ve tried the Arc Staff in PvP in Destiny 2, and it feels clunky. That agility that you should have is largely gone when using it, and you’ll find yourself getting gunned down as you try and close the gap on your enemies. It can be useful in PvE if you find the right situation.

The final Hunter subclass is the Nightstalker, and this is about the only subclass I can see being the main for most Hunters out there. The Super Ability is Shadow Shot, a Void bow that fires a tether. Any enemies close by will get caught in these tethers, and damage received by those enemies is increased. It is a semi-passive subclass, but pair it with a Warlock or Titan in your fireteam (or both) and it instantly becomes one of the more useful Super Abilities in PvE. It’s nonsense in PvP, though, so stick with the Golden Gun for that. 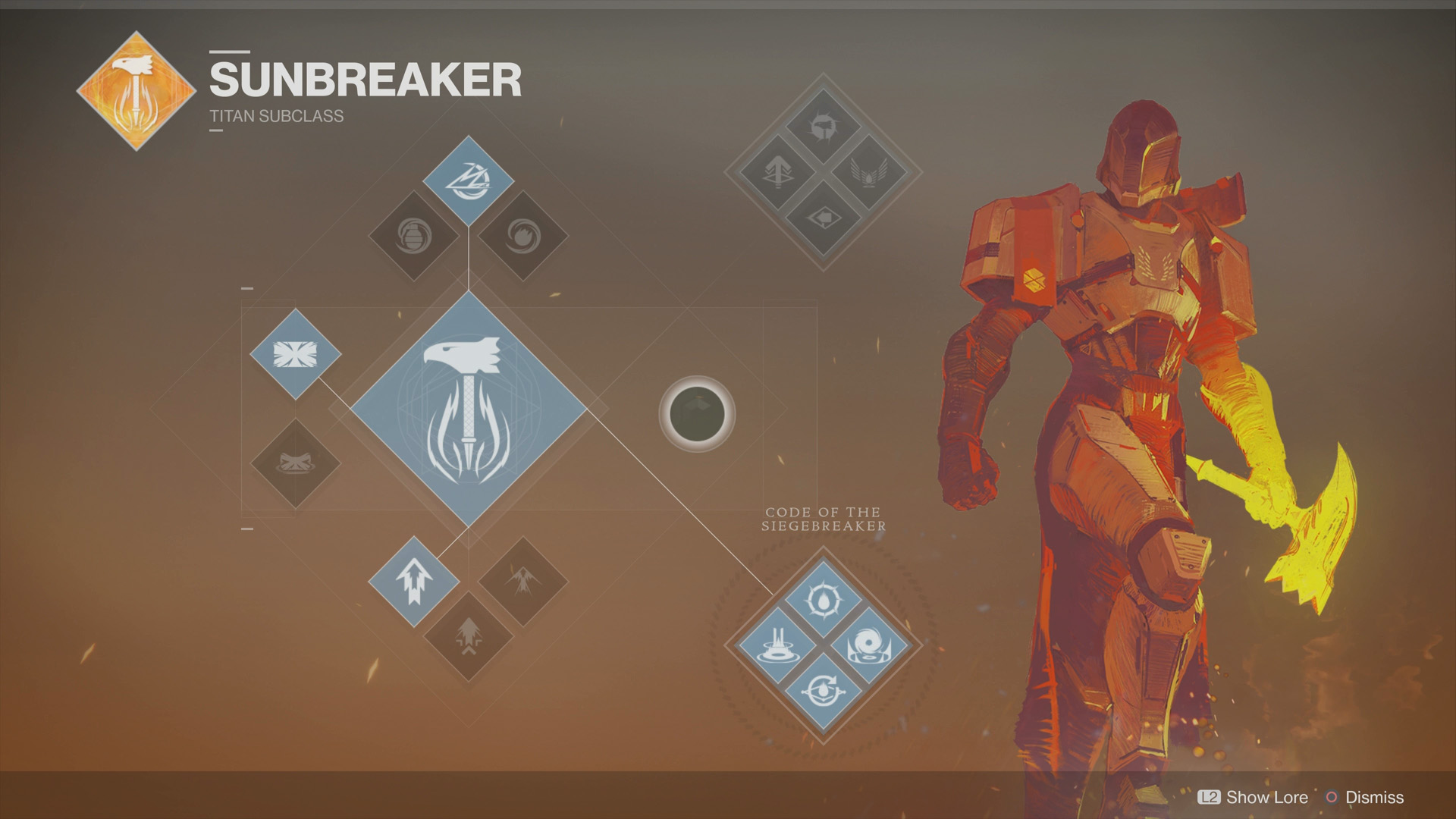 The Titan class is known primarily for their armor. They can take an incredible amount of damage in PvE, and are often near-required for portions of strikes and raids. Much more than the Hunter, the Titan will be called on repeatedly for specific tasks. They also own some of the best Super Abilities for dishing out the pain in PvP.

The Titan class ability is either the Towering Barricade or Rally Barricade. The former is larger and can be used to reinforce your position and protect you from enemy fire. The latter is smaller, but you can peek over it and duck back into cover. When you duck back into cover, it automatically reloads your weapon.

The Titan comes with three subclasses in Destiny 2. Those are the Striker, Sentinel and Sunbreaker. Each have strengths and weaknesses, but it’s a much easier class to play than the Hunter or Warlock in my opinion. If you’re on the fence and don’t know where to begin with class selection, Titan might be the way to go. 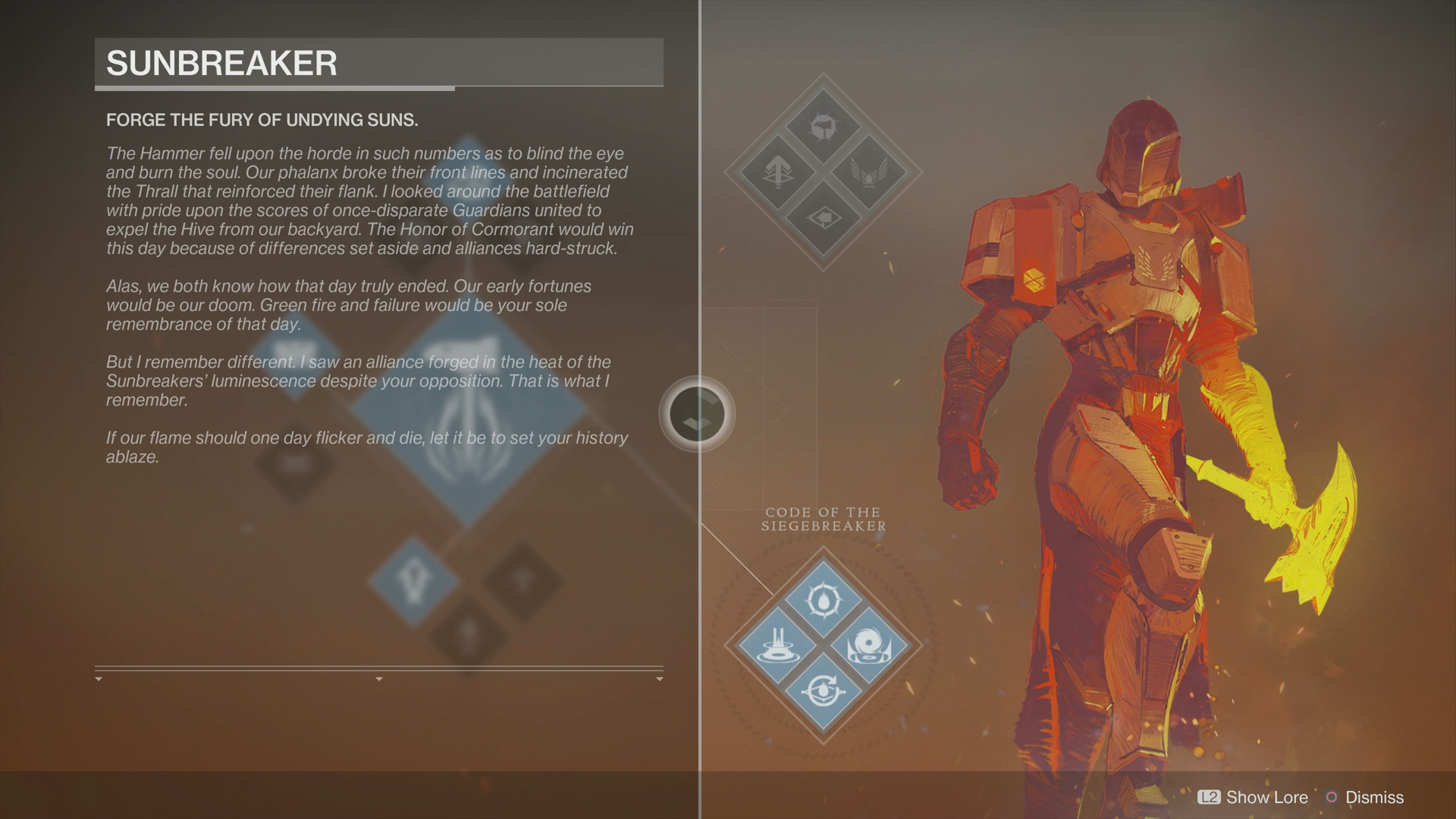 The Striker subclass is back from the original Destiny, but it has some tweaks. Where the Fists of Havoc Super Ability used to be single-use, it now has a follow-up. What was the most devastating PvP Super Ability in Destiny has gotten much better in Destiny 2. You can still one-shot Guardians with it by slamming your fists into the ground, but then you can charge around the area for a short time using super-powered Shoulder Charges to body-check your enemies to death.

The Sentinel subclass is new in Destiny 2. The Super Ability, Sentinel Shield, will allow you to summon a shield of Void Light that can be used to block incoming damage, melee enemies close by, or even perform a Shield Throw to attack enemies at medium range. It’s less used in PvP than Striker, and I rarely see it used in PvE, although this could just be my fireteam. Still, Sentinel Titans have a more offensive Super Ability than anything the Hunter puts forward.

The Sunbreaker subclass is the Solar option if you choose the Titan class. It gives you the Hammer of Sol Super Ability, allowing you to toss Solar hammers at your enemies. It can be effective in PvP, but is also great for the Emperor Calus boss fight in the raid. It’s the middle child as far as Titan subclasses go, but it has uses in almost any activity that you decide to take part in. 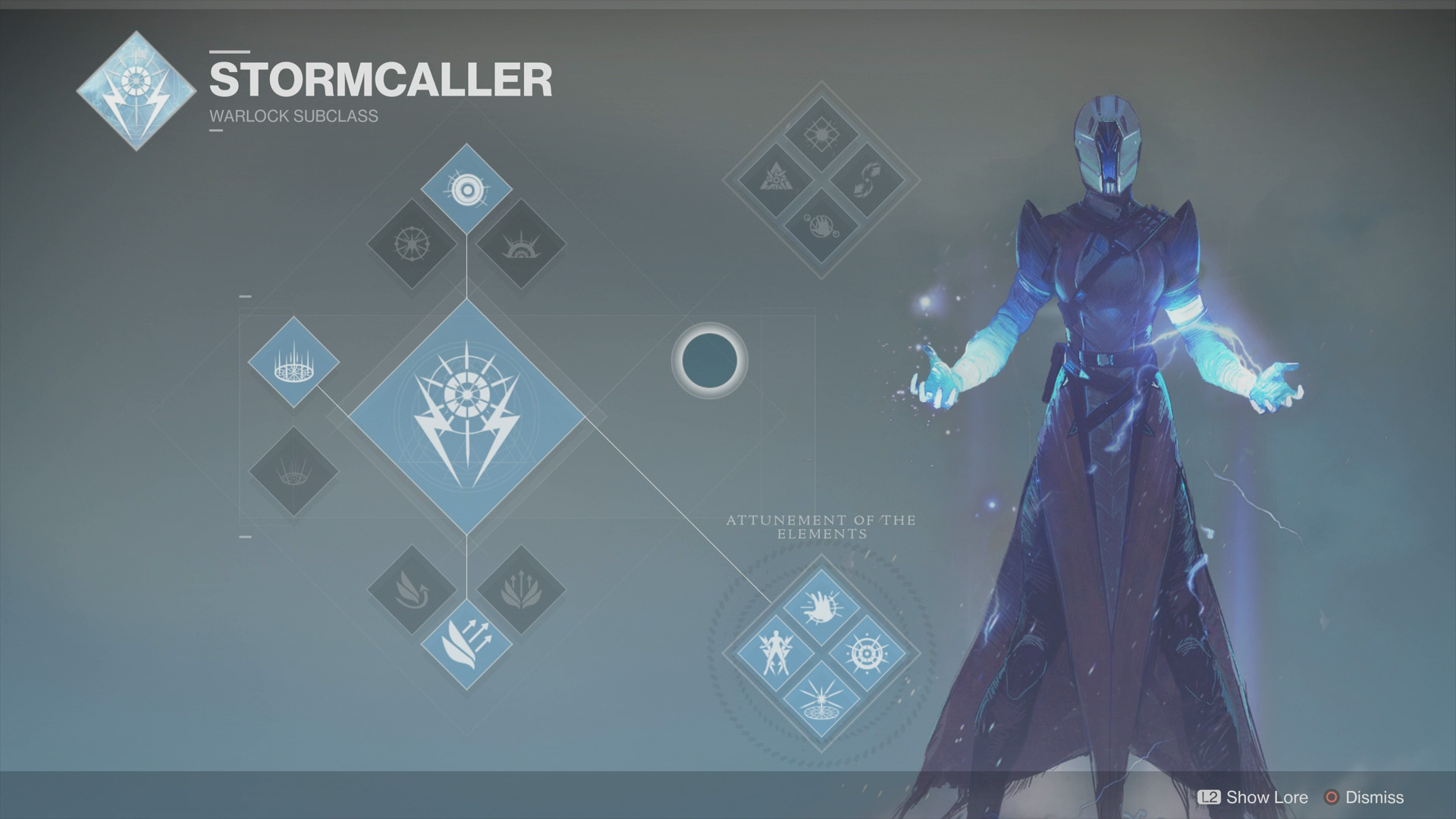 The Warlock class in Destiny 2 is about understanding and harnessing the Light that the Traveler provides. The class has strong abilities with the Healing Rift and Empowering Rift, and thus there is nothing you can do in PvE that isn’t made infinitely easier by having a Warlock. If you were leaning towards this class to begin with, you should just jump right in. You will be the most useful Guardian in your group in most situations.

The Warlock’s subclasses are Dawnblade, Voidwalker and Stormcaller, all of which have good Super Abilities in their own way. However, the prize of the Warlock class is the Healing Rift ability. This can be used on any of the subclasses and provides a pool of Light that continually heals all Guardians inside it. In PvE, the Healing Rift is essential in some places, providing lifesaving Light during damage phases. 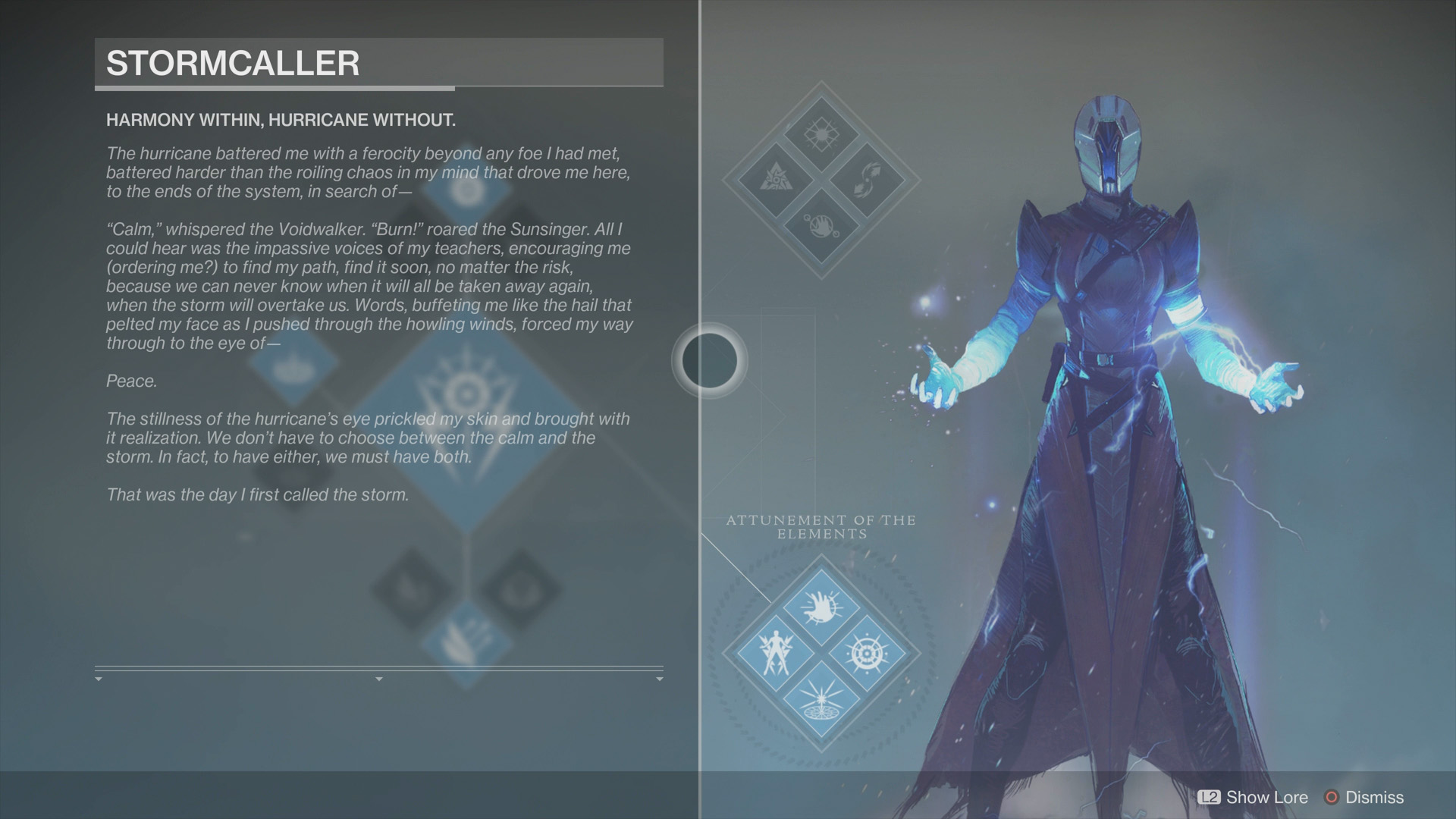 The Voidwalker subclass is likely the least popular Warlock subclass right now. It’s Super Ability, the Nova Bomb, allows Guardians to throw an explosive chunk of Void Light at their enemies. This thing can wipe an entire four-person fireteam in PvP, or a room full of enemies in PvE. It’s just not new, having been around since the original Destiny, and there is a more popular option as far as Warlock subclasses go.

The final Warlock subclass is the Stormcaller, and I’d guess it’s the most popular of the bunch right now. It comes with the Stormtrance Super Ability. This Arc based Super Ability allows the Warlock to skate across the environment, shooting Arc Lightning from their hands as they melt rooms full of enemies in their path. You’re going to see a lot of this in PvP, but it’s also great at certain points of the Leviathan raid. Luckily, you get all three subclasses when you pick a class, so you won’t be left behind.

So which class should you choose? Well, that’s a complicated question. If you were leaning in one direction or another out of preference, go with that. The Hunter is kind of useless right now, but I’m a Hunter. I’ll fire that class up first for Destiny 2 on PC, even though the Warlock and Titan are more appealing for different reasons.

At the same time, if you’re going to be playing Destiny 2 on PC with two friends, and both have picked their class, take the one that’s leftover. Turn your fireteam into a multi-tool that can handle any situation you come across.

If I had to choose a class based on its merits and ease of use for players new to Destiny 2, I’d probably tell you to go Titan. You can take a lot of damage, have defensive abilities, and a good mix of Super Abilities to choose from. It’s the safe bet, and one that will see you being useful in PvE and PvP alike. Once you get a feel for that and get to watch Hunters and Warlocks in action, you can choose a class for your second character.