Mario Odyssey Will Be the Switch's Technical Showcase

The Nintendo Switch is a runaway success. Many months after it hit retail shelves, the portable console is still scarce on store shelves and is expected to be in short supply throughout the holiday season. All the fanfare hasn’t come without gripes, though. The Switch’s showcase launch title, Zelda: Breath of the Wind was marred at release by some very inconsistent framerates. Some of the high-profile third party releases had to receive graphical downgrades to operate on the Switch and still had problems running smoothly, NBA 2K18 in particular. Bethesda’s Doom port will run at only 720p and 30fps, a serious departure from the 1080p 60fps stunner it was on the PS4 and Xbox One. After months of hype, Nintendo is set to dispel any concerns about the Switch’s hardware prowess with the impending release of Super Mario Odyssey.

Super Mario Odyssey is bright, colorful and looks every bit as good as any game on any platform, PC included. At first glance, things appear to be simple, but spend any amount of time watching Odyssey in motion and you’ll see the monster Nintendo is about to unleash on gamers everywhere. Mario’s latest adventure ticks all the techincal boxes. It features stunning water shaders, high-resolution shadows, improved lighting over Mario Galaxy 2, clean textures, an abundance of alpha effects, and particle displacement. 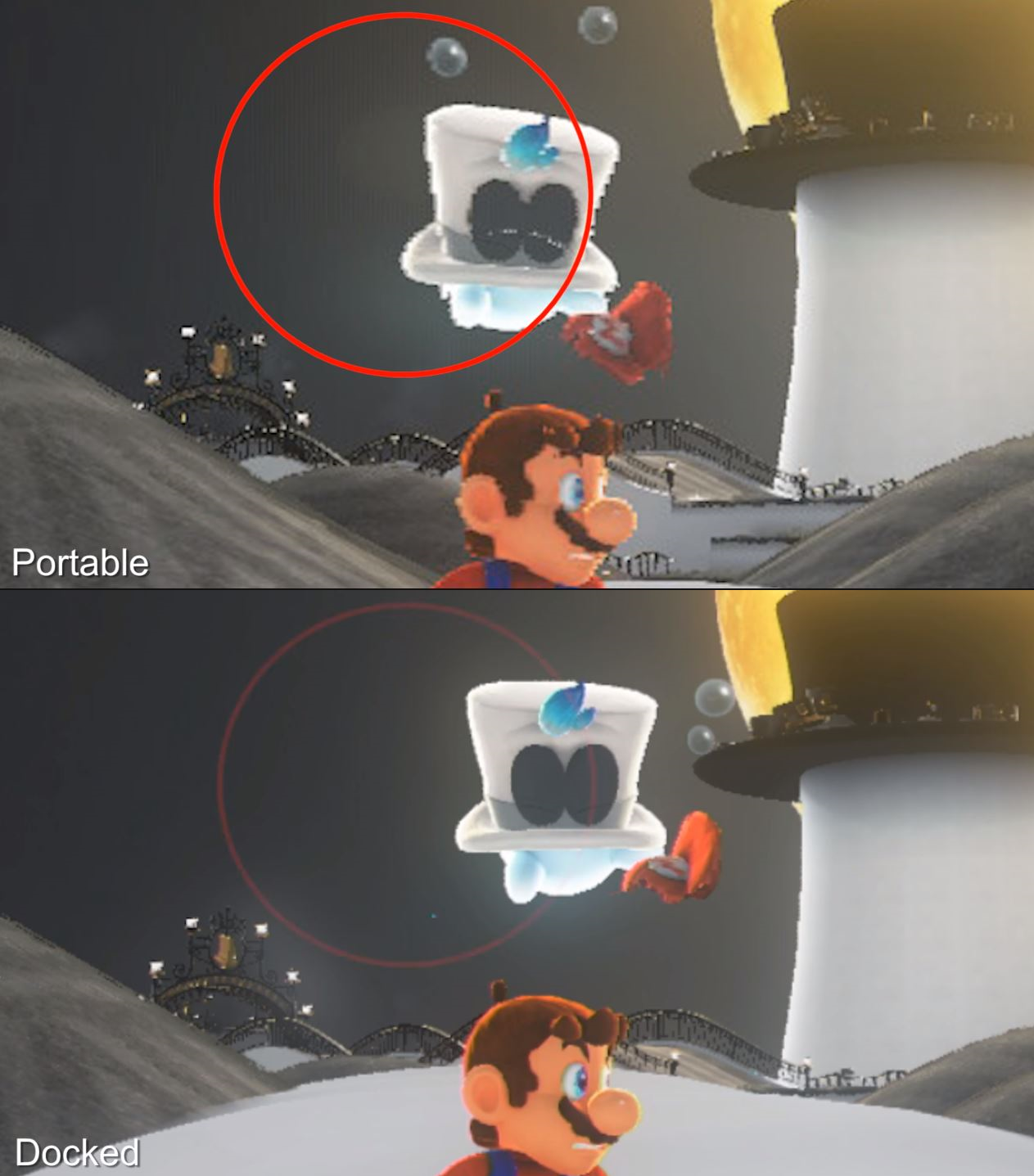 The folks over at Digital Foundry posted a video detailing all the graphical effects and the differences you will encounter when running the game in portable mode versus docked mode. The biggest difference between the two modes is rendering resolution. Mario Odyssey will run at 720p in portable mode and 900p in docked. Because the game does not seem to offer any type of anti-aliasing, the 60% increase in pixels gives the docked presentation a huge advantage over the portable counterpart. This is the highest resolution that any core Mario game has run at and the results are incredible. The image offers a clean look that is similar to what PC users have seen from running the Super Mario Galaxy games at high resolutions using the Dolphin Emulator.

There are some other concessions made by Nintendo to get Odyssey running smoothly in portable mode. In-engine cutscenes drop the resolution down to 640x720p in order to maintain smoothness. The portable mode also uses a lower resolution for its lighting effects, which can lead to blurriness around the edges of characters. Draw distances for certain effects like bloom and level geometry are also reduced. Shadow resolution takes a sizeable hit when undocked for Mario and onscreen enemies. 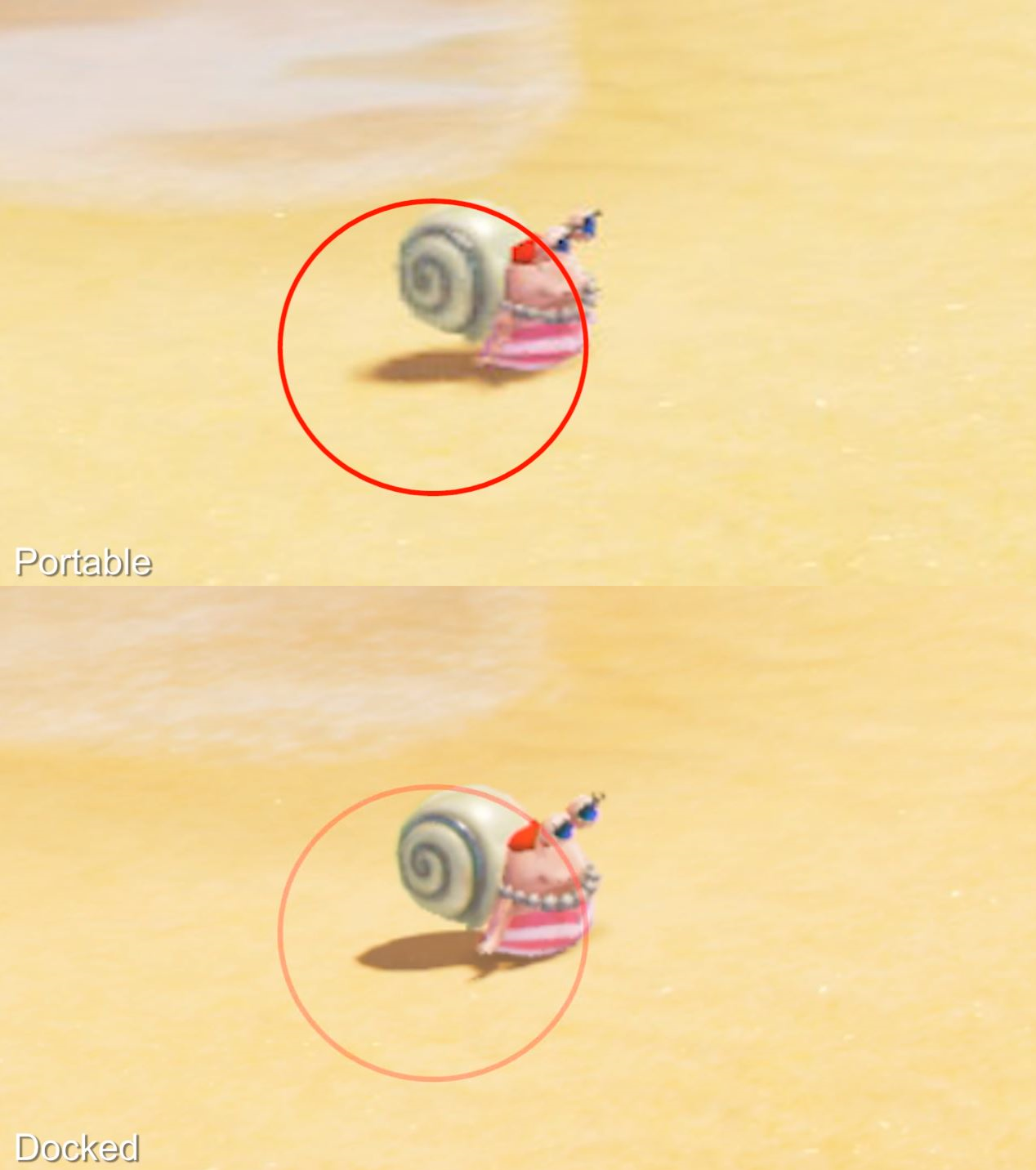 The compromises are worth the hit in quality, though, as Mario Odyssey runs at a smooth 60fps in portable mode during gameplay and cutscenes. The game’s included photo mode drops the framerate down to 30fps to accommodate an increase in level of detail, improved texture filtering and the application of anti-aliasing. The smooth 60fps is a must for a serious Mario game, though, as the reduced input latency and more responsive controls will make navigating through the game much more enjoyable.

If I had a time machine, the first thing I would do is go to October 27 so I could being enjoying Mario Odyssey right away. Feel free to check out our recent preview while you wait!