Destiny 2 - How to Get the Mida Multi-Tool Exotic

The Mida Multi-Tool was a fan favorite weapon in the original Destiny. Whether it was PvE or PvP, players loved this Exotic Scout Rifle mainly because your radar would remain active when you were ADS (aimed down sight). The same perk exists for the Mida Multi-Tool in Destiny 2, although getting this gun doesn’t depend on RNG this time around. Thank the Traveler.

How to Get the Mida Multi-Tool

To get the Mida Multi-Tool in Destiny 2, finish the main story missions. Doing this will unlock quests and missions on each planet. The one you’re looking for is called Enhance, and can be found in the Trostland region of the EDZ (European Dead Zone) on Earth. The quest will be marked on the map with a blue icon that looks like it has a white crown in it. If you don’t see it, start knocking off any quests you do see in the Trostland until it pops up. The Enhance quest comes with a recommended Power level of 260, so this is to be considered end-game content. Once the Enhance quest is complete, Devrim Kay will give you the Mida Mini-Tool, a Legendary Submachine Gun, as a reward. 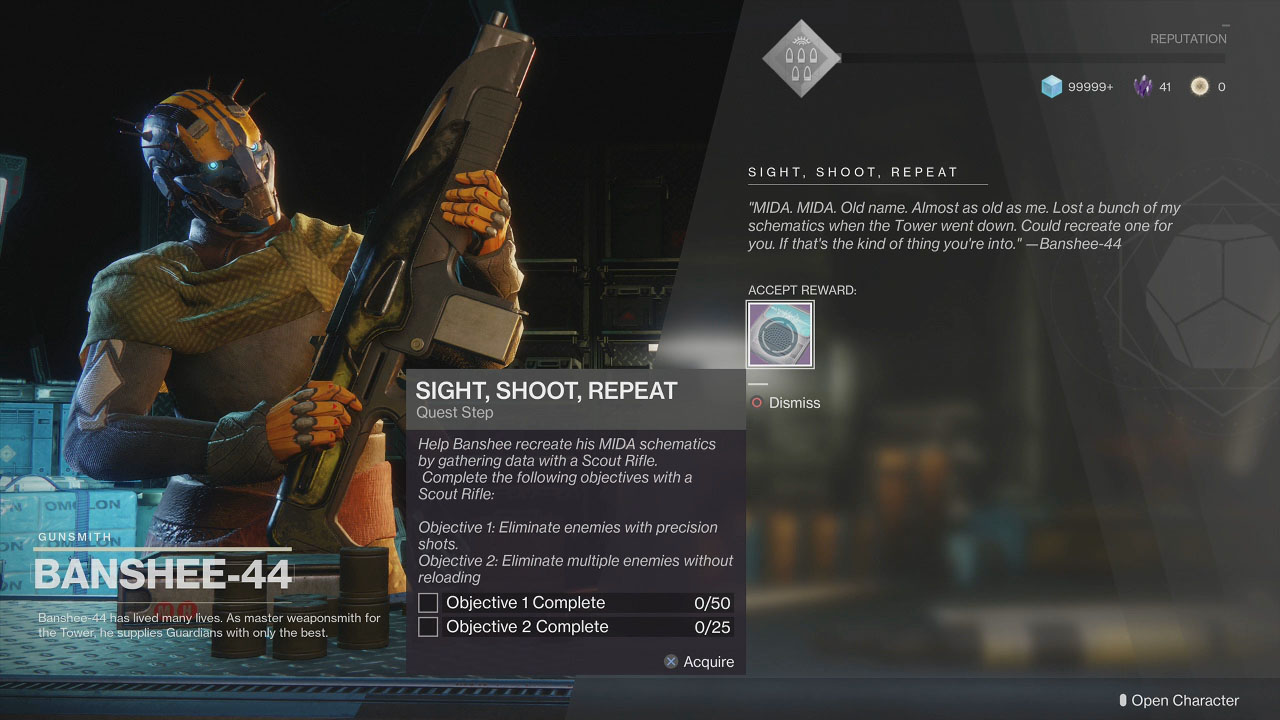 Head back to the Tower and speak with Banshee-44. It’s here that he will give you a quest called Sight, Shoot, Repeat. This quest has several stages to endure. The first two must be completed with a Scout Rifle, be it a Kinetic or Energy weapon. 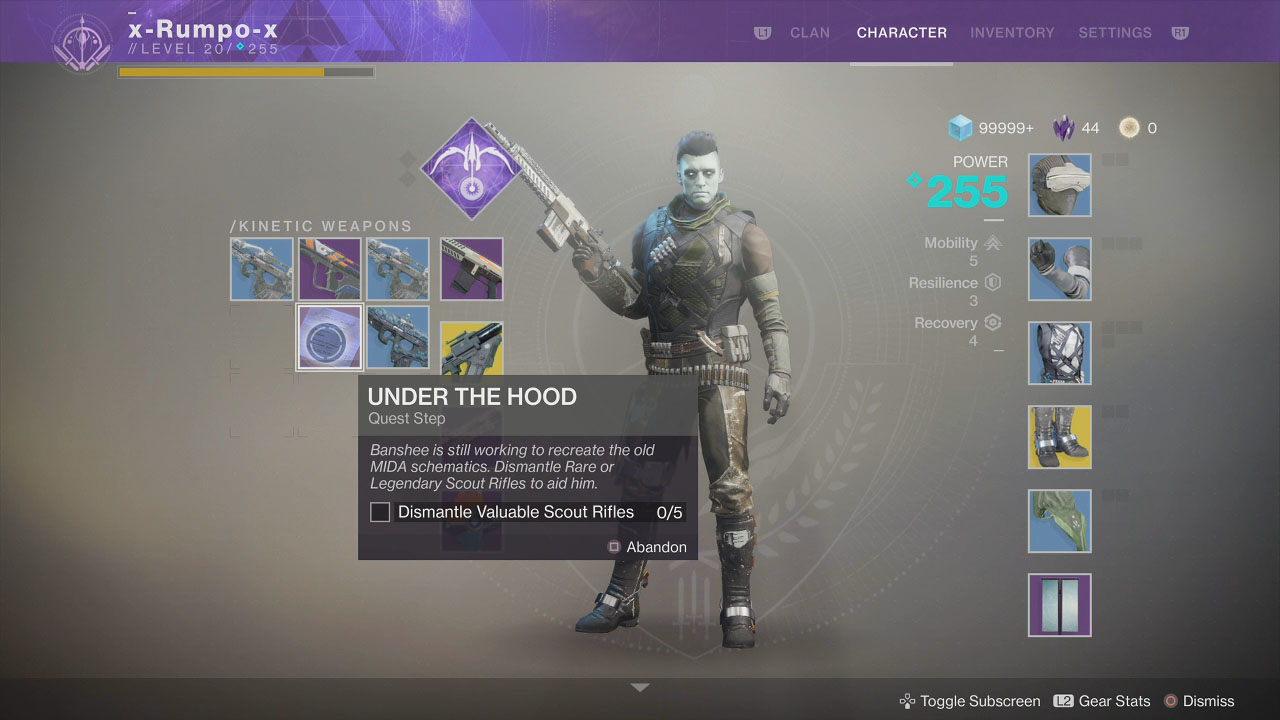 When that step is complete, head back to the Tower and speak with Banshee-44. He will then ask that you dismantle five Rare (or better) Scout Rifles. Again, these can be both Kinetic and Energy weapons. If you have them in your inventory, this will be quick. If you do not have them, head out into the world and play the game until you get the drops you need. Dismantle your five Scout Rifles and then go back to speak with Banshee-44 again to get the next step.

The Fall Will Kill You 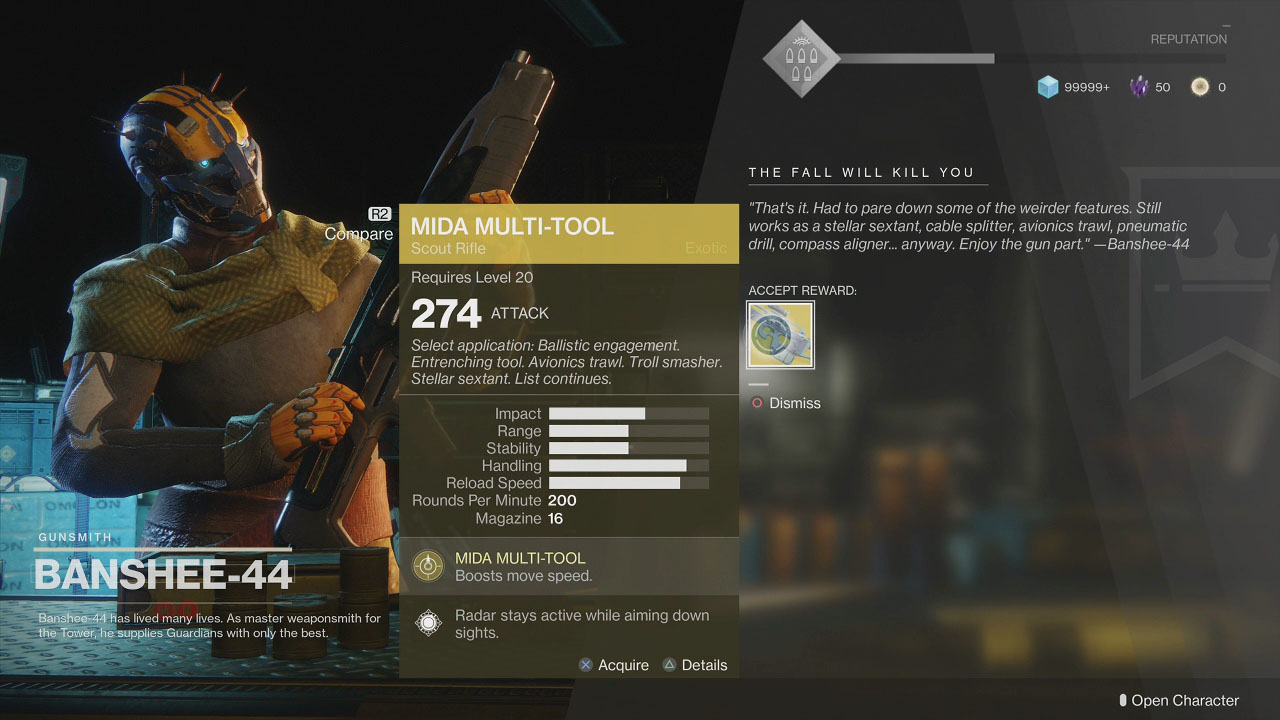 This quest step is silly, but it’s not exactly difficult. You were given the Mida Mini-Tool by Devrim Kay, and that is the perfect weapon for this job. I got my 50 SMG kills will airborne in two Strikes. This is most easily accomplished by softening your enemies up with a couple of shots while your boots are on the ground, and then jumping up and using the hip fire mechanic to finish them off. One of my fireteam members knew what I was doing, so he would wound all enemies, but stop short of killing them, essentially setting the table for me to get some easy airborne SMG kills. On a second run through the MIDA Multi-Tool quest, I finished this step during the Leviathan raid, although I wasn't trying and have no clue how I managed to get that many airborne kills with an SMG. I'll take it. 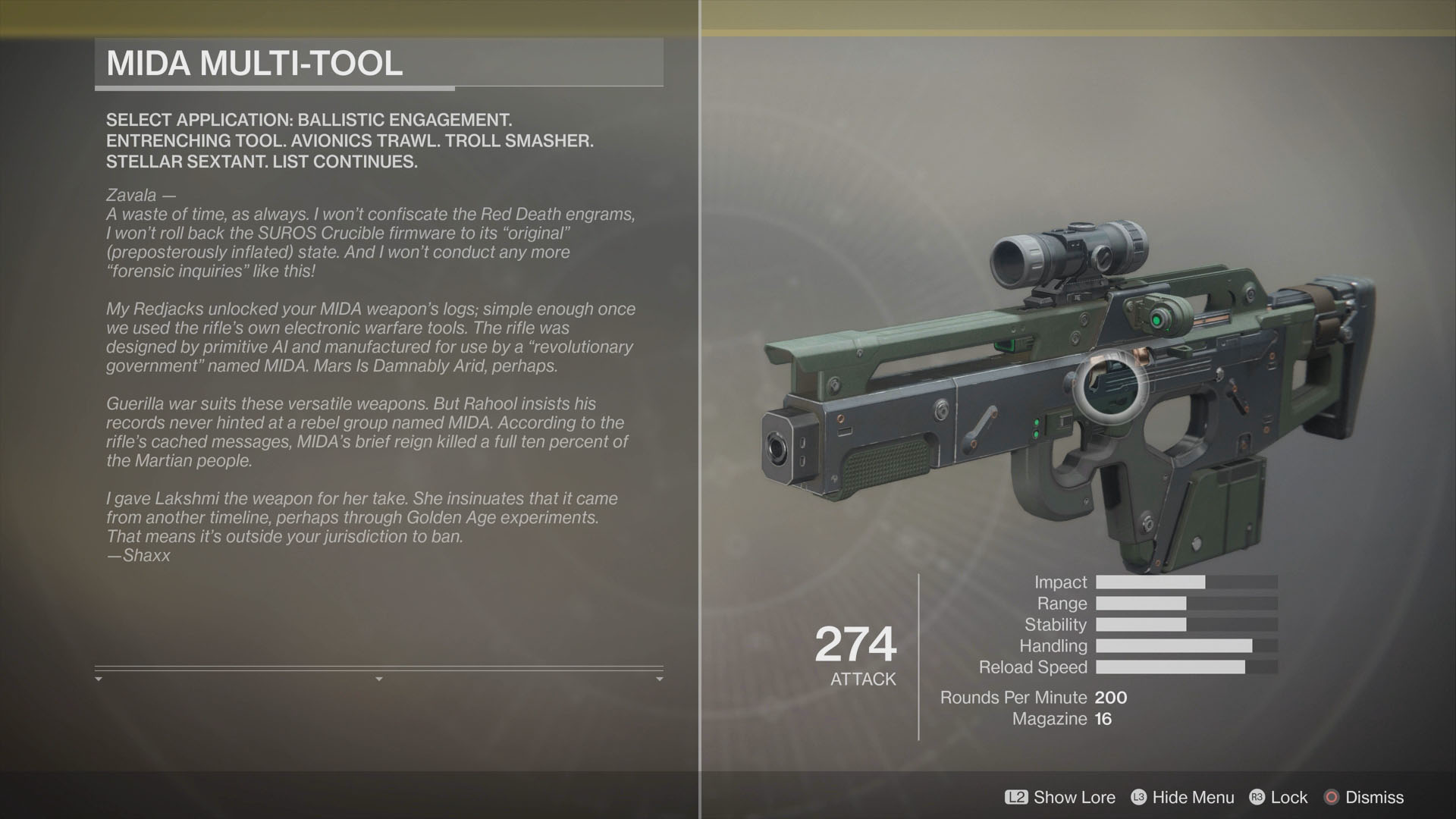 When you finish this quest step, head back to the Tower one last time and speak with Banshee-44. Instead of another quest step, he’ll hand you the Mida Multi-Tool Exotic Scout Rifle. The perk everyone was looking for was called Third Eye in Destiny, but is called Mida Radar in Destiny 2. This is the one that allows your radar to remain active when you’re ADS. This is particularily helpful in the Crucible, as it allows you to ADS and make sure you aren't being flanked.

If you’re looking for more information to assist you on your journey, visit our Destiny 2 complete strategy guide, where you’ll find everything you need to do right by the Traveler.