When Bungie launched Destiny, they did so with some fairly lofty goals that centered on keeping players engaged for the long-term. The game somewhat sputtered out of the gate with a lackluster campaign and didn’t really hit a solid stride until the release of the third DLC, The Taken King. Destiny 2 has already impressed with a much better PvE campaign and the developers have shared a schedule for September that is thick with activity. On top of that, leaked information on upcoming DLC has been corroborated via a listing on the Xbox Store.

Via their blog, Destiny has laid out the content plans for September. If you’ve managed to reach the required power level, the launch week included a Nightfall where you’re tasked with taking down an arms dealer. You’re also able to scour the EDZ for bounties in the new Flashpoint activity. On top of the two PvP playlists and a handful of more advanced activities you’ll unlock at higher levels, Bungie is welcoming old and new players with open arms but the 2nd weekend is when things really kick off. 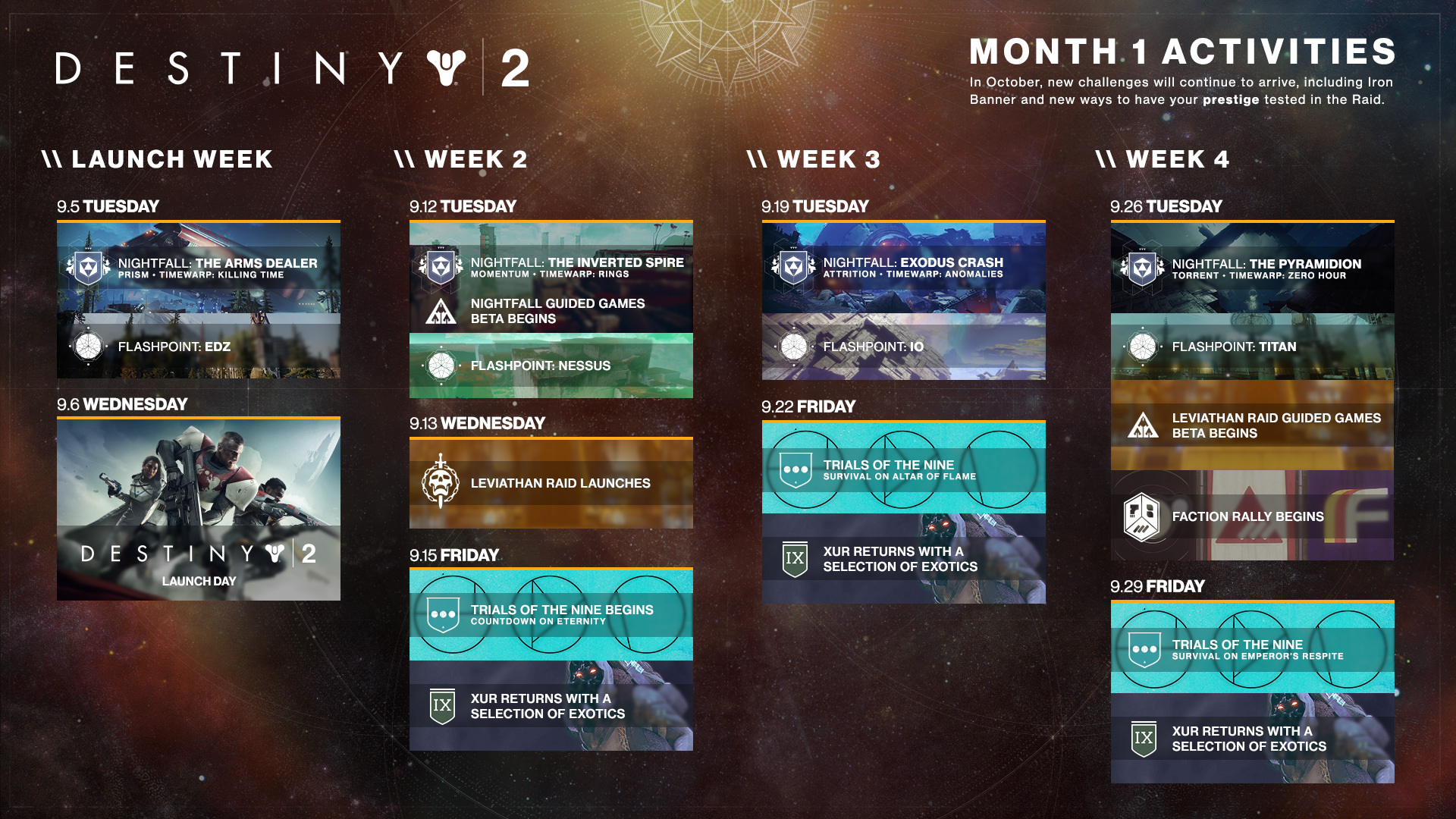 On Wednesday, September 13, the very first Destiny 2 Raid will be open for business. Leviathan will welcome the best of the best and see who’s the first to conquer the rewarding and difficult activity. A new Nightfall will be available earlier in the week, giving players an opportunity to earn better gear for the Raid. The Flashpoint activity will move over to Nessus, Xur will make his first appearance with a collection of Exotics for purchase, and a new experience called Trials of the Nine will begin on Friday. There are no details on exactly the Trials will involve. The blog also hints at Iron Banner activities for the Crucible in October.

Furthermore, a listing on the Xbox store has corroborated some previously leaked details on upcoming Destiny 2 DLC. Gamespot reports that Curse of Osiris official listing on the store lines up with an original report from Kotaku. The listing reads as follows:

“Destiny 2 Expansion I: Curse of Osiris continues your Guardian’s journey with all-new story missions and adventures set in a new destination, Mercury. Journey through time and space to learn the secrets of Osiris, avert a dark future, and rebuild the ties between the legendary Warlock and his greatest student - Ikora Rey.”

There’s no release date on the listing but, hopefully, the store listing going live means Bungie will be speaking on this content in the near future. Don't go out into battle alone, Guardian. Check out our complete strategy guide and get prepared for Leviathan.