Blizzard promised some changes would be coming to Hearthstone in an upcoming patch, with Game Director Ben Brode speaking of changes to Druid, in particular. Those changes have been announced and they're more far-reaching than players expected. Some major Hearthstone staples are getting the nerfhammer in the game's upcoming 9.1 version. Today, Shacknews is analyzing each change and its impact on the meta going forward. 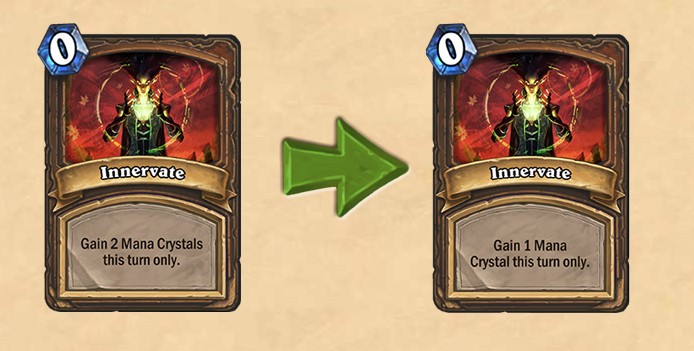 Blizzard explanation: "Several powerful variations of Druid are currently seeing play, and all of them utilize Innervate. Innervate creates explosive starts to the game that can be difficult for the opposing player to recover from. This change leaves Innervate as a simple Basic card and slows down the explosive start potential, while ensuring that it will be utilized in decks that revolve around playing inexpensive spells."

Shacknews analysis: Ramp Druid has been taking the current Hearthstone meta by storm, along with Jade Druid, Aggro Druid, and pretty much every other Druid one can think of. At the backbone of each Druid deck is the powerful Innervate spell, which offered two free mana crystals for the current turn.

Innervate grew excessively powerful over the course of Hearthstone's life. As a spell, it would trigger Gadgetzan Auctioneer and make extra space for the inexpensive Jade Idol. It would also combine with Fandral Staghelm for additional plays and even allow Druid players to sprint right ahead to the devastating Ultimate Infestation.

The Innervate nerf has been laid out in hopes of slowing down some of these plays, but the actual change isn't crippling for Druid players. The spell merely becomes the Druid's version of Counterfeit Coin. Wild Growth and Nourish still allow for Druids to get ahead of their opponents and start getting the bigger plays out early, while still triggering Gadgetzan Auctioneer in the late game. Innervate goes from wildly powerful to simply useful. Don't expect to see this card go away, regardless of this change. 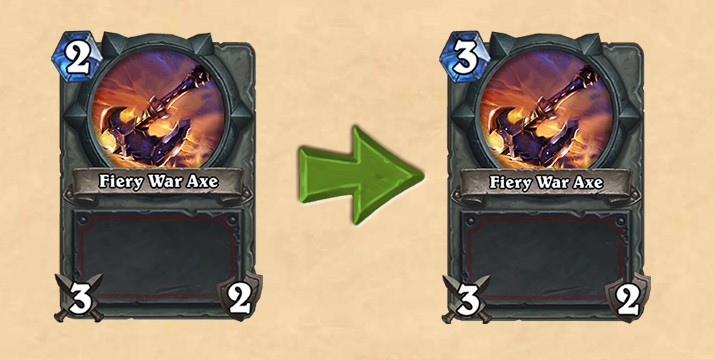 Blizzard explanation: "Fiery War Axe has been a powerful Warrior weapon since the launch of Hearthstone. Already great tempo for its cost, Fiery War Axe is well complemented by Pirates and cards that synergize with weapons. Raising its mana cost by 1 will slow down the Warrior's tempo and lower the overall power level of the card."

Shacknews analysis: Warrior players did not see this one coming. Fiery War Axe has been a staple for nearly every Warrior deck. The 2-mana 3/2 weapon was a critical tool for control decks, while also getting the ball rolling in aggro decks. The cost bump makes it nearly unplayable, taking away a crucial Turn 2 control option and slowing down the pirate parade significantly. Gone will be the days of the Turn 1 Coin + FWA, followed by the Turn 2 5/3 Bloodsail Raider.

It's hard to imagine Warrior decks continuing to run this, despite it still being the cheapest of the Warrior weapon options. Pirate Warriors will likely continue to pack it in, simply for lack of better options. Control Warrior and Quest Warrior decks will likely make the switch to the new Blood Razor, given how well it plays with many of the Warrior's minions, like Armorsmith.

Control and Quest Warriors will be affected heavily by this change, but will likely carry on undaunted. This is the second time the Pirate Warrior has been bopped by the nerfhammer, following the change to Small-Time Buccaneer. This change hurts much more, though, because Aggro Warrior is entirely reliant on speed and board presence and it loses both with this adjustment to Fiery War Axe.

Blizzard explanation: "We're not making the change to Hex due to a current power-level problem. Shaman is a class that currently has a lot of flexibility, but is lacking in both class identity and identifiable weaknesses. Changing Hex makes Shaman a bit weaker against big minions and worse at silencing—having both strengths and weaknesses in a class is important."

Shacknews analysis: Hex is the Shaman's most reliable polymorph spell, but it's also one of the cheapest such cards in the game. This increase in cost doles out a slight inconvenience to a class that's already richly versatile, able to trot out multiple viable decks. The increase to Hex's cost brings it more in line with the Mage's Polymorph, evening the playing field in that sense.

The increase to Hex's cost now presents the Shaman with more of a dilemma, because the class now has several removal spells at the 4-mana spot. Jade Lightning is still crazy effective, as is Avalanche and Tidal Surge. All four of these removal spells have specific advantages and downsides, depending on the deck the Shaman player is using and the type their opponent is using.

Hex's change isn't so much of a meta-breaker, as it is an interesting tweak.

Class: Neutral
Now reads: Your other Murlocs have +2 Attack. (Down from +2 Attack, +1 Health)
Meta Impact: High

Blizzard explanation: "Murlocs are good at taking an early lead, and if a player can’t clear the board in time, the game can ultimately snowball to victory using cards like Murloc Warleader. Removing the Health buff from Murloc Warleader will make it easier for players to clear the board of murlocs, and still have it remain a Classic build-around card. Simplifying health buff interactions is an additional benefit of this change. For example, in its current state, having a Murloc Warleader in play then using Wild Pyromancer and Equality would not destroy other murlocs on the board, leading to unclear interactions for some players."

Shacknews analysis: Murloc Warleader! What have they done to you?

This change completely destroys the Murloc Paladin and pretty much any other Murloc deck as the meta currently knows it. Warleader had a wide array of uses, as well as many ways to exploit its effect. Blizzard touched on one with its ability to help its brothers survive the Wild Pyromancer/Equality combo. The other main thing to note is that the health buff would help a lot of lesser murlocs trade into opposing minions while staying alive. This would be crucial for Finja, the Flying Star, in particular, since that health buff would let it stay alive while killing off other minions and bringing new murlocs onto the board.

Without the health buff, Murloc Warleader simply becomes a better version of Grimscale Oracle. Does it become unplayable? That's very possible. It certainly makes Coldlight Seer a critical addition to any murloc deck. Regardless, this change is going to hurt and is a huge blow to any deck built around murlocs.

Blizzard explanation: "Spreading Plague is a great defensive tool for Druid to protect themselves against aggressive decks, but it was too efficient at 5 mana. Raising the mana cost to 6 will slow the card down slightly, while still allowing for the defensive minions Spreading Plague creates to be utilized in the later stages of the game."

Shacknews analysis: Even with this bumped-up cost, Spreading Plague remains a valuable Druid tool. It's a surefire way to ward off aggro decks, but its main purpose involves holding off larger threats in the late game. Jade Druids, in particular, will still find ample use for this card, playing it to lay down multiple taunts, while still getting increasingly massive Jade Golems out onto the board.

This nerf mostly amounts to a minor inconvenience, however the bumped-up cost has the potential to lead to trouble against aggro decks. Fortunately, with Wild Growth, Nourish, and even the nerfed Innervate still around, getting to 6 mana should be no trouble for the average Druid player.

What are your thoughts on these card nerfs? Feel free to offer up opinions in the comments and join the conversation.