The original Niddhogg was best described as something far better than it looked. It looked primitive, like something pulled out of the 70s. But the concept of sword fighting and foot racing turned out to be such a crazy fun idea, it still holds up strongly today. So it's hard to imagine what can be improved on in a sequel.

Still, creator Mark "Messhof" Essen gave a sequel the old college try. Like any other sequel, it offers up the gift of "more." However, that's partly what dooms Nidhogg II, because it was never about "more." It was about making the most out of less. And because of the inevitable progression towards "more," the sequel winds up feeling "less." 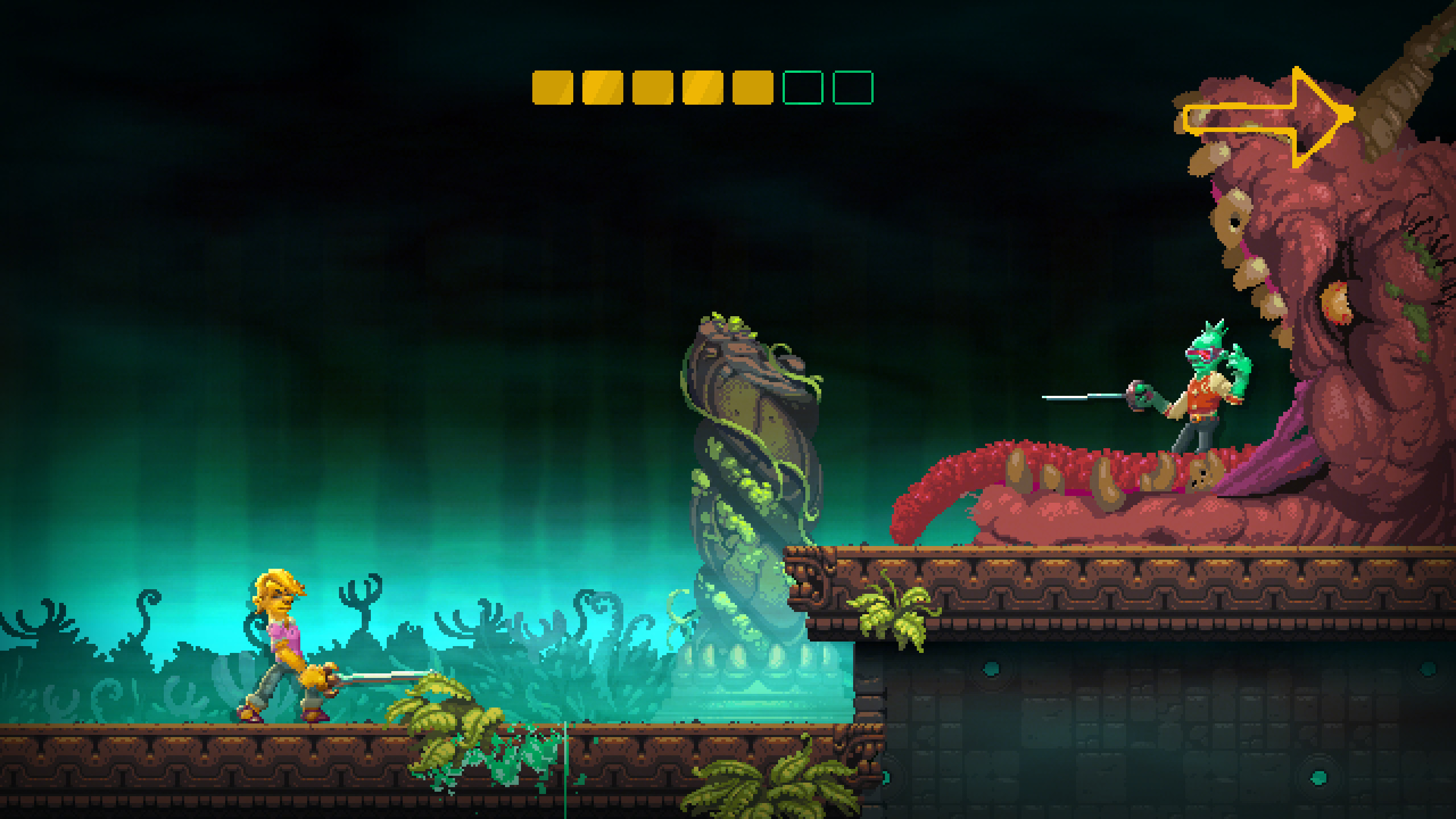 For those unfamiliar with the Nidhogg formula, the concept is simple. Kill the opponent to gain momentum and then sprint to the finish line, to ride to glory inside the gullet of a giant worm. The original's frantic pace is fully retained here and it still feels as fun as ever. There are still those moments of fist-pumping in victory or letting out a profane shout just as I get stabbed at the edge of the final screen. It's an insanely entertaining tug-o-war, so it's safe to say the spirit of the original Nidhogg is still firmly in place.

That's when the differences start to set in, because Nidhogg II looks noticeably different. The old-school Atari aesthetic is gone, in favor of a look that harkens closer to the 16-bit era. On the surface, the character models look like an eyesore, but the actual purpose is to allow for some customization. Players can choose how their characters look by swapping out heads, torsos, legs, and accessories. It's a cool idea, but the options feel limited and there's no way to save a favorite layout. The final visual product still veers towards the unsightly side, but the effects that go into the kills and weapon shots are at least more visually appealing. It ends up like watching claymation figures fight each other.

The visual overhaul also extends to the game's numerous maps. Some of them, like the Beach and Wilds, feature some gorgeous renderings of outdoor environments. Some of the stages are even visually upgraded versions of the original. The trouble is, sometimes the environments get a little too animated and make it tougher to focus on what's what. That last screen on the upgraded Castle stage looks cool, with a drawbridge covered in 16-bit flames, but it's a little too busy to maintain focus on who to kill or even where to jump.

The formula looks to evolve by packing in some new weapons. The original swords are still there, but players will now randomly spawn in with other instruments of death, like a bow and arrow and a dagger. This adds an element of RNG to the mix, because the weapons don't feel particularly balanced. The dagger, for example, is weak, while the two-handed broad sword is a powerful (albeit slower) piece of work. Sometimes, scoring a kill feels less because I was a skilled player that knew how to wield a sword and more like I got a lucky shot in or I had the better weapon.

In a series that feels minimalistic at its core, Nidhogg II's biggest improvement winds up being an unheralded feature. Netplay in the original was a total mess. Things feel far more stable this time around, even if the actual online menu still feels bare bones. Strong online play at launch was one of the original game's biggest failings, but that's not the case this time around. Offline play remains Nidhogg's biggest strong suit, though, with solid 1v1 and Tournament modes in place, especially with options to make the weapon spawns less random.

Nidhogg II is a case where bigger isn't always better. It's like trying to improve on a peanut butter and jelly sandwich. Sure, it's possible to add things to it, but the PB&J isn't something that really needs improving. That's how I felt coming away from Nidhogg II. It's a good attempt at improving on the original, but the end result didn't leave me feeling the same magic that I did when playing the first game. But with that aside, for those looking for chaotic dueling action, it's hard to argue with either Nidhogg game.

This review was based on a PS4 digital download purchased by the reviewer. Nidhogg II is available now on PC and PlayStation 4 for $14.99.