Hearthstone: Knights of the Frozen Throne - How to clear the Upper Reaches

The Upper Reaches of the Lich King's Icecrown is now open, which means Hearthstone players will have three more single-player bosses to confront. There's a fresh Knights of the Frozen Throne card pack available for anyone that beats these three bosses, so Shacknews is going to help out with some key strategies for this week's baddies. 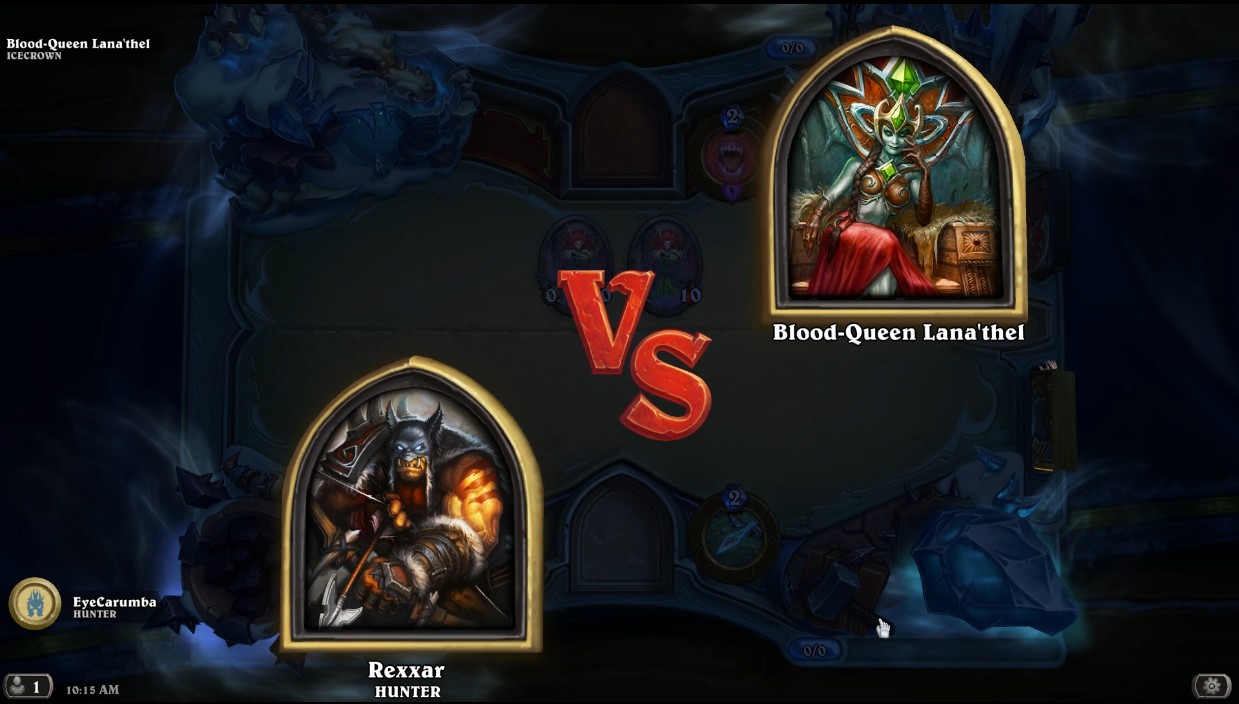 Blood-Queen Lana'thel curiously has a pair of 0/10 Sleeping Acolytes on her side of the board. The reason for that becomes clear when she opens with the 1-mana Bite of the Blood-Queen spell to turn your Hero Power into the 0-mana Vampiric Bite, which gives a non-Vampire minion +2/+2. On top of that, the Hero Power usage is mandatory.

The idea is that you'll have to use the Hero Power to power up the Sleeping Acolytes. The 1-mana Blood Essence spell will also randomly turn 2 minions in your hand into spells, in an effort to reduce buffing options.

This is a great place to give Quest Hunter a whirl. Use 1-mana minions to flood the board and buff them all whenever possible. Jeweled Macaw and Webspinner should also keep your hand refreshed. The Quest should ideally be completed around Turn 5, at which point the 8/8 Queen Carnassa can wreak some havoc. Blood-Queen Lana'thel has some Corruption spells in her deck, but keep aiming face and this fight should end quickly.

Watch out for Despicable Dreadlord, who can clear the board in short order. If he comes out, dispose of him. 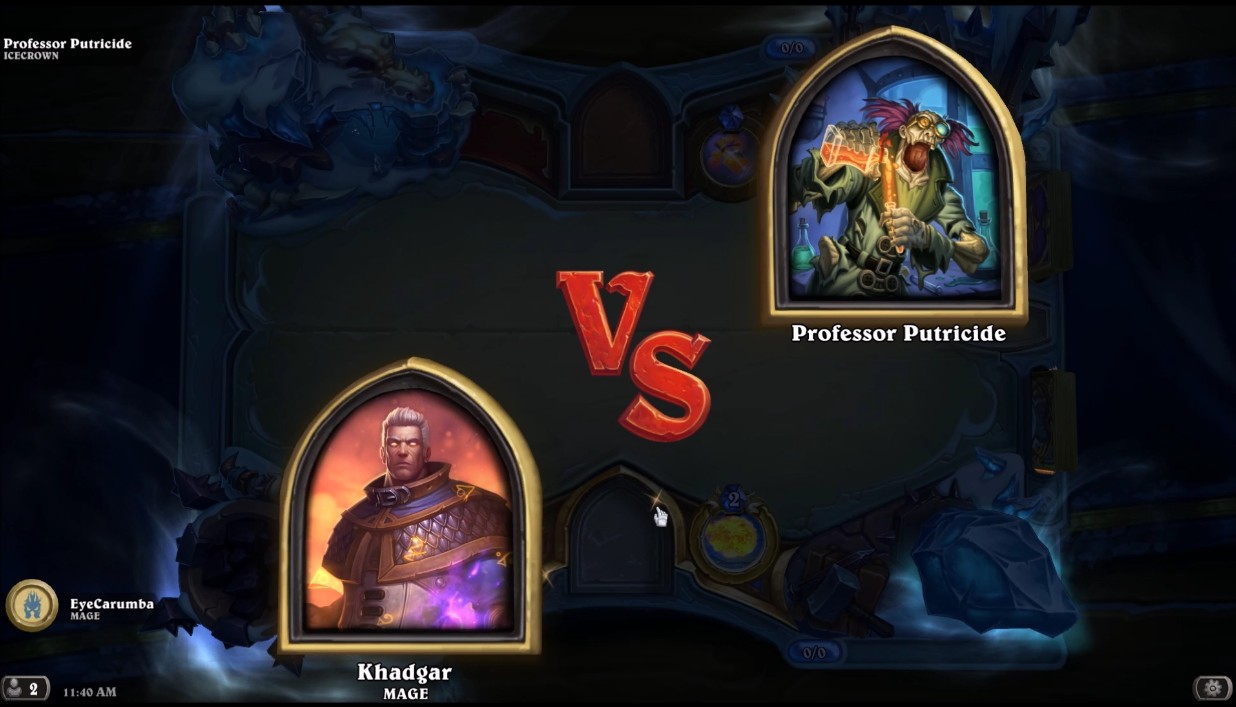 Good news, everyone! Professor Putricide has reduced the cost of all Secrets to (0)! That means it's time for the Mage to party!

Pack all of the Mage's greatest hits, including Mana Wyrm, Medivh's Valet, and Flamewaker. Also, go nuts with as many offensive Secrets as possible. Leave Ice Block and Ice Barrier at home. Instead, pack up Frozen Clone, Duplicate, Potion of Polymorph, Mana Bind, and Counterspell. Ideally, you can swipe some of his Growing Oozes and use them for yourself. Also, minimize the Professor's own Secret impact by packing in some Kezan Mystics and Eaters of Secrets.

The fight gets a little tougher down the stretch, because the Professor also has a slew of weapons. Put a stop to that with your choice of Ooze or Harrison Jones. The latter will be essential, since he'll provide much-needed card draws. When Professor Putricide shifts to his second phase, he'll summon a 3/5 Festergut. Deal with him immediately, because he'll cause 3 damage to all of your minions each turn if left unattended. Use a removal spell off Primordial Glyph, if necessary.

Professor Putricide's last gasp will involve bringing all card costs to (5) and summoning Rotface. If you have the board presence, ignore Rotface entirely and just keep aiming for the face. By this point, the Professor's resources will be far too thin to withstand a straight-up assault. 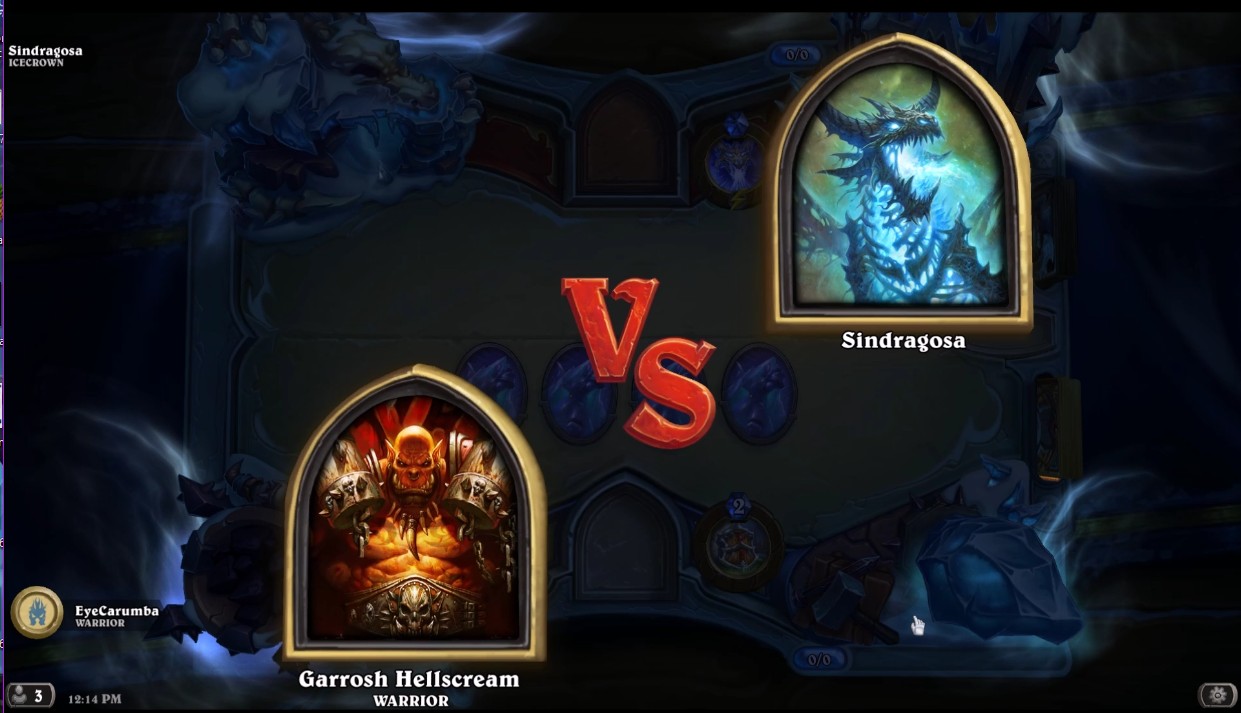 Don't let the useless blocks of ice littering your side of the board fool you. Sindragosa is an exceptionally easy fight once you've figured out her game. The idea is that at 20 and 10 health, she'll turn whatever minions you have on the board into blocks of ice, rendering board slots completely useless, since these ice blocks are unremovable.

Sindragosa will also use the 1-mana Unchained Magic to cause 3 damage to the face for every spell in-hand. So if minions and spells aren't the way to go, the answer becomes weaponry. And if the answer is weaponry, then it's time to call in the Warrior.

Just as with Deathbringer Saurfang, pack the Warrior's best weapons and keep upgrading them along the way. Have Grimestreet Pawnbroker ready to power up the next weapon in the assembly line. Use minions only to trade in to Sindragosa's, because they'll clutter up the field the moment she hits 20 or 10 health.

Use Bash and Mortal Strike to finish the fight and enjoy the card pack!

There's only one fight left and that's with the Lich King himself. Shacknews will be back next week to break down the best ways to defeat him and stand tall atop the Frozen Throne.