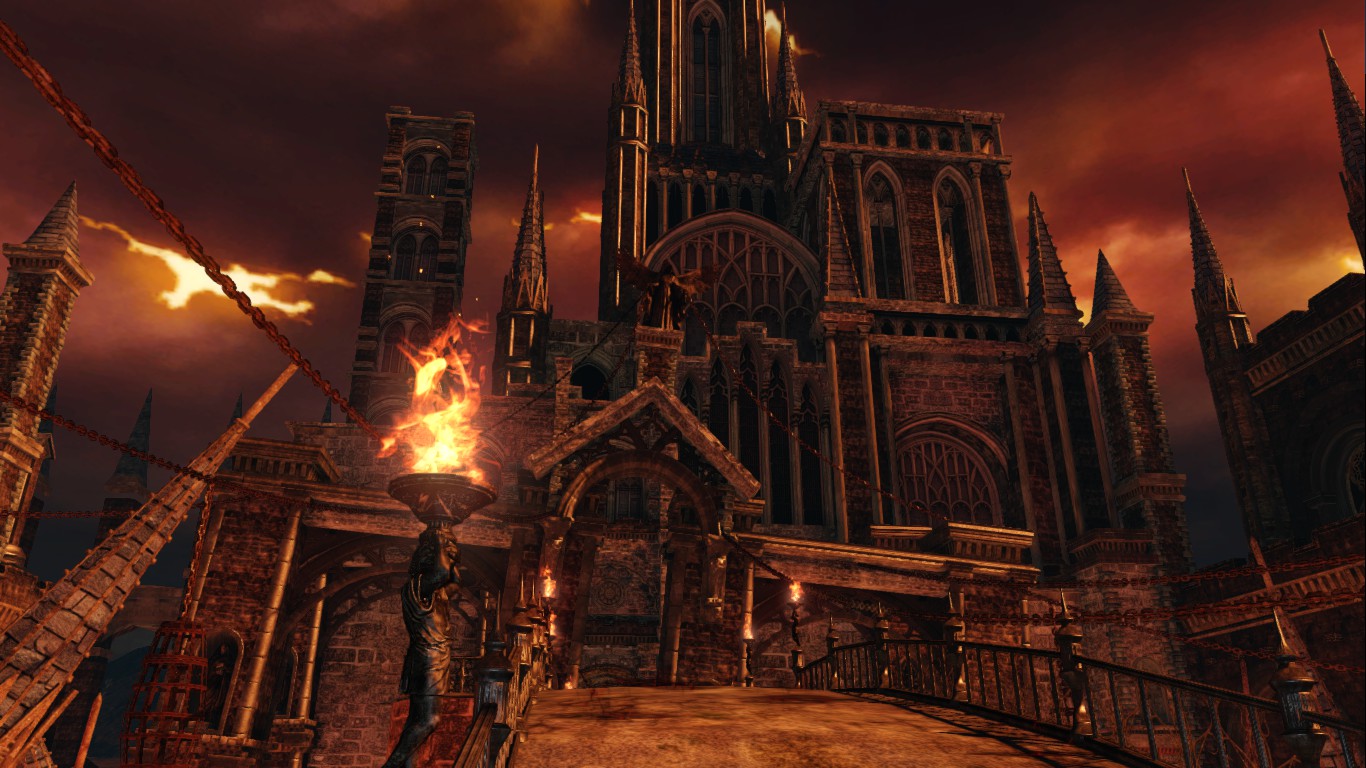 FromSoftware's SoulsBorne games have a history of turning RPG tropes upside down and shaking all the lint from their pockets. Demon's Souls' Royalty class starts with Soul Arrow, a ranged spell with enough punch to kill most early-game enemies in one or two hits and a ring that slowly regenerates mana, the game's way of biting its thumb at the precept of casters being utterly worthless until they learn decent spells a dozen hours in. Firelink Shrine, the "town" of Dark Souls, debouches into a graveyard where skeletons—typically found at or near the bottom of the RPG-monster food chain—make short work of new players.

All the toil and trouble front-loaded into RPGs builds character, and characters. You have to survive so that you can appreciate your gradual maturation into a beefy warrior who struts around with a two-handed sword propped over your shoulder or a wizard able to cast spells of such wonder and power as to make Merlin look like the proverbial wizard's apprentice. That's the part of RPGs I tend to enjoy the most, standing tall on the summit of experience and peering down far, far below at all the monsters I've vanquished and treasures I've accumulated.

Not so in the case of my ladle-only avatar. Looking back, the first eight or so hours were the most memorable. That doesn't mean they all give me warm fuzzies. Those hours were the most tedious, the most frustrating, the most challenging of any Dark Souls 2 character build I've ran. But all those lemons made for one sweet and sour jug of lemonade. When Flexile Sentry and That Damn Tree—you may know him as the Last Giant—went down, I drank from that jug greedily. It tasted like ambrosia, and the juices of triumph dripped from my chin.

Because when you fight with a spoon, you run everywhere.

Everything changed after I acquired my Handmaid's Ladle and made it extraordinary by making it mundane. I began dealing respectable damage. Nothing comparable to a Black Knight's Axe or a Fume Ultra Greatsword, but a Short Sword upgraded to +2, maybe even +3? Easily.

This diary chronicles my attempt to play through Dark Souls 2: Scholar of the First Sin using only the Handmaid's Ladle. Miss an earlier entry? Get caught up here.

The biggest challenge going forward was the weapon's range. And by range, I mean no range at all. I had to get close enough to enemies to hug them. I've done this before; a year or two ago I ran a "boxer" build that wielded two Caestuses. Somehow, the ladle, a weapon if only nominally, had worse range than gloves that required me to literally touch enemies.

Looking for easy-ish prey on which to test my new broken mundane kitchen instrument, I entered Huntsman's Copse and ran all the Skeleton Lords. Because when you fight with a spoon, you run everywhere. The three lords aren't so bad. Upon dying, each flies apart into fragments that take seed in the ground and grow a crop of minions you have to defeat. FromSoft's Scholar of the First Sin remixed elements from the main game, such as these mob sizes. Instead of a few regular skeletons and skeleton captains, and enough wheel skeletons to make this year's E3 seem sparsely populated, you get a few captains and wheelies and an army of regular skeletons. As always, patience won the day. I'd dart in—way, way in to make up for my abysmal range—get in a few licks, and then run away, ducking behind a pillar to heal.

Offing the Skeleton Lords gave me enough souls to stock up on life gems, my most valuable resource for most of the run. Tired of killing bosses, I went exploring. Still running, but exploring. My goal was to add a few essentials to my inventory, such as the Chloranthy Ring +1 in the fog-enshrouded region of Shaded Woods, a zone I affectionately refer to as Silent Hill.

From there, I pushed deeper into the woods and exploited a shortcut. Beyond two petrified enemies you can find Sublime Bone Dust to increase the efficacy of your healing flask. De-petrifying both bad guys would necessitate spending two valuable Fragrant Branches of Yore. Fortunately, a shortcut exists. From the third bonfire in Shaded Woods, get a running start and leap out a window overlooking a bridge. You'll land on the far side of the petrified monsters with only a knight standing between you and your dust.

Scorpioness Najka, the boss of Shaded Woods, seemed too tall a hurdle to leap. She bequeaths lots of souls, and I'd need every single one in order to keep evening out my stats and scaling my mundane damage. Still, I had no desire to beat my head against another brick wall; Flexile Sentry and That Damn Tree were still fresh in my mind. Covetous Demon, though. He seemed ripe for the picking. Or so I thought.

Bearing a striking resemblance to a certain hut in a galaxy far, far away, Covetous Demon is thought of by Dark Souls 2's community as perhaps the easiest boss in the game. I would like to take this opportunity to remind you that I brandished a spoon, and a broken one at that. My damage numbers were impressive, but the fight lasted long enough for Covetous Demon to regain most of the swagger he'd lost to millions of players since 2014. Yes, he got his licks in. Literally.

Feeling inordinately confident after slaying Covetous Demon, I put my clothes back on—just watch the video, it's so embarrassing, I can't even—and proceeded through Earthen Peak and onward to Mytha, the Baneful Queen. It's important for me to note once again that the videos I upload capture my wins, not my many defeats. Mytha knocked me off a few times. The challenge, as per usual, was my weapon's virtually nonexistent range. Not only did I need to pick my spots and decide between getting in two or three quick strikes or one or two slower but more damaging heavy attacks, I had to deal with the very real possibility that my blows would not connect, even if I was close enough to Mytha to hug her, as she hugged me.

Dark Souls 2's hit boxes catch a lot of flak. Some of it is justified. Enemies will swing, you'll roll through, and somehow the outside edge of their weapon will reach around to nick you for a quarter of your life bar. I love Dark Souls 2 warts and all, and can admit that that's frustrating. My spoon's negative range frustrated me exponentially more, especially given that I needed each and every hit to count. Mundane damage helps, but a broken ladle is still a broken ladle.

Overcoming the headless queen, I entered Iron Keep. This zone, too, gets a bad rap in Dark Souls 2, both the original release and Scholar of the First Sin. This time, I'll go to bat for my favorite Souls. A common complaint leveled at both versions of Dark Souls 2, but especially Scholar, is that the designers too often conflated difficulty with fighting swarms of enemies. I disagree. Not that the game overuses mobs, because it does.

Where I deviate from popular opinion is that in the majority of those cases are manageable. Iron Keep throws a lot of Alonne Knight enemies at you, but the way they come at you is measured. Knights come at you in a steady stream. The interval between each is just enough to dispatch one before the next one steps up. Work quickly and efficiently, and you'll be fine. Hide behind your shield, or push too far into a level too fast, and you won't be.

Anecdotally, most of the gripes I've heard and read come from players who run through levels. Most enemies are programmed to "wake up" when players set foot within their radius of attention. Rustling up every hollow only for them to catch up and bash you to bits is a natural and fair consequence of actions such as attempting to dash through a level to reach a boss fog gate or retrieve some item.

Waking up enemies involves calculated risk. Mess up, and it's not the game that drops enemies on you like a ton of bricks. It's you.

Feeling braver than I had earlier, I rounded out this leg of the run by fighting Scorpioness Najka and, beyond her, Prowling Magus. As Dark Souls 2 veterans likely suspect, Magus wasn't so bad, but his congregation gave me trouble. They're a bunch of zombies and weak on their own, unless you carry the self-afflicted condition of broken spoon-ism.

In the next installment, I return to Iron Keep and set my sights on some of the tougher bosses in the early- and mid-game segments. Miss an earlier entry? Get caught up here.