Hearthstone's next expansion, Knights of the Frozen Throne, is slated to release this coming Thursday, August 10. While the main attraction will be the new Death Knight heroes, the expansion is also set to receive 135 new cards. Shacknews is going to do its part to march towards this new expansion by analyzing the new cards through the big release date. 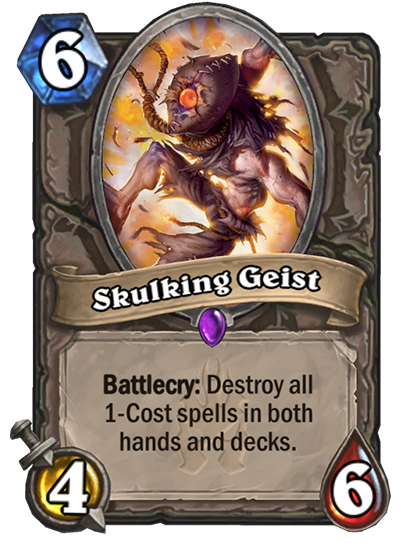 Uh ohhhhhh... turn out the lights, Jade Druids. The party's over.

Nobody expected Blizzard to address the Jade Druid dominance in such a drastic fashion, but here it is. This is Skulking Geist and it destroys all 1-Cost cards in both players' hands and decks! That means say goodbye to that Jade Idol for the rest of the game.

But the Jade Druid isn't the only one feeling the pain. No, no, no, sir, he isn't. Evolve Shaman gets rocked with the potential loss of Evolve, Paladins lose any Secrets they may have handy, Rogues lose precious Cold Blood spells and leftover Swashburglar minions, and Quest Hunters stand to have their quest requirements and quest rewards both obliterated in one fell swoop. This one hurts a lot.

What makes Skulking Geist different than Gnomeferatu is that it equally punishes the player that puts it on the board. However, there are ways to plan around this. It's entirely possible to thrive on decks without 1-mana cards or make the 1-mana cards entirely inconsequential to the late game. In most cases, this will hurt the opponent a lot more than it will hurt whoever plays it.

This is an absolute must-have in any deck, just because of the 1-mana cards that comprise the backbone of some of the meta's most widely played decks. Even without the effect, a vanilla 4/6 isn't the worst thing in the world, but it's absolutely worth it for the pure chaos it can cause with Druid, Shaman, Paladin, and Hunter. This is the biggest game-changer in the entire expansion. Get used to seeing it, because Skulking Geist will be around a lot and it will wreck face every time it comes out. 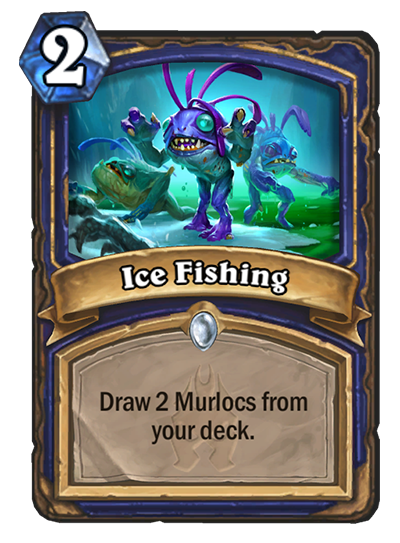 Ice Fishing is a cheaper and more helpful version of the Warlock's Sense Demons. This card offers some insane value, offering a two-card draw for just two mana. It's a more valuable version of Wild's Ancestral Knowledge and one that offers no Overload downside.

Any Murloc Shaman should run this without hesitation. Even zoo decks might want to consider running this, since it can put a pair of cheap Murloc minions directly in hand and offer up multiple Turn 3 minion plays. 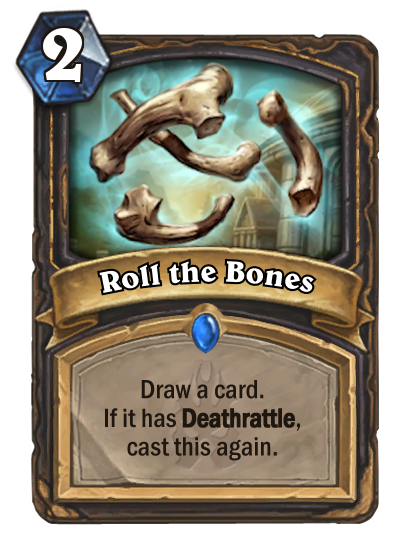 Roll the Bones is a spell that, at worst, can offer a one card draw. That's not horrible. But it can also be a haven of value, offering multiple card draws for just a 2 mana cost.

With Rogues packing cards like Bloodmage Thalnos, Jade Swarmer, Undercity Huckster, and Sherazin, Corpse Flower, it's very much possible to draw multiple cards for just 2 mana. This has the potential to be a high-value play, with a worst case scenario of only being a middle-of-the-road play. This is a strong addition to most Rogue decks, though Miracle Rogue may not need the help, given that deck's liberal use of Gadgetzan Auctioneer. 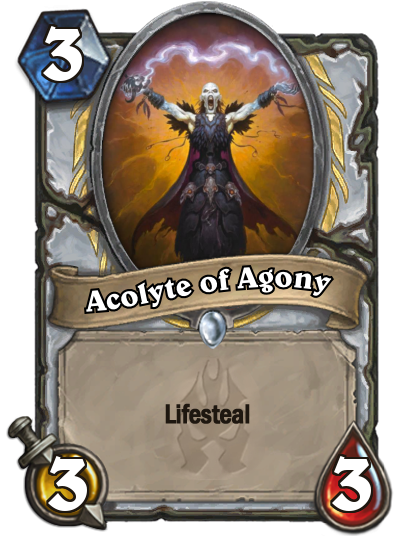 Yeah, this is as straightforward as it gets. It's a vanilla 3/3 with Lifesteal. Not much else to say, other than it won't see much play in Standard and is a lower-end Arena pick. 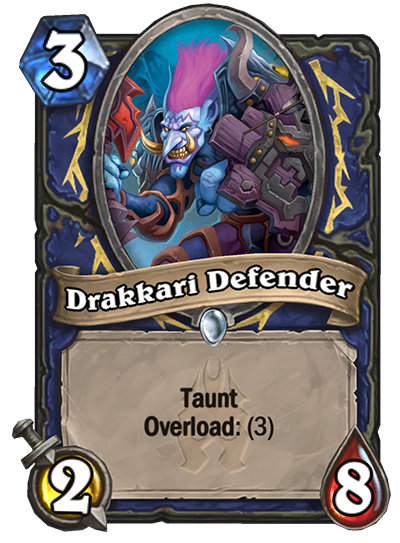 Shaman is now getting its own version of Deathlord. But yikes, that's one heck of a downside, isn't it?

This is a brutally expensive play. If it's played on Turn 3, it only leaves one Mana Crystal to play with on Turn 4. The Shaman player wouldn't even be able to bring out Eternal Sentinel to unlock those Mana Crystals. This is difficult to recommend over Feral Spirit, which fills all of the Shaman's Turn 3 Taunt needs, while also offering less of an Overload downside. 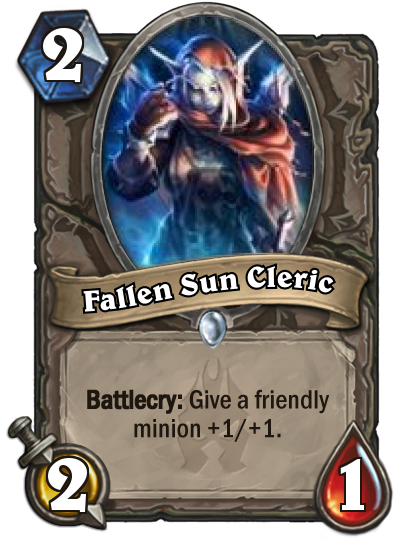 Oof! This is... not particularly good.

So remember the Priest's Shadow Ascendant that I said wasn't very good? This is even worse! Not so much for the Battlecry, but for that miserable 2/1 stat line. That's a tough stat to sell on a 1-mana minion, much less one that costs 2 mana.

Murloc players alone have a much better minion with this same Battlecry with Rockpool Hunter.

Players that really need that Battlecry boost might as well just wait one more turn and use Shattered Sun Cleric, which is at least slightly harder to remove. The Fallen Sun Cleric, as it is, is a dud and won't see much play at all. 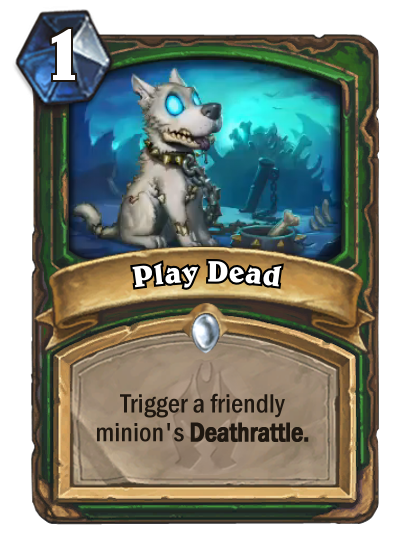 Who's a cute little zombie puppy? You are. You are!

This is a diet version of the old Feign Death spell. But there's something to be said about that cheap 1 mana cost that makes it potentially more viable.

One might even assume Blizzard is trying to tell its players something by using the picture of an adorable puppy. That something is to use this on a different kind of canine: Kindly Grandmother.

After a Turn 2 Kindly Grandmother play, Hunters can get some good value out of activating its Deathrattle with this card and then play Crackling Razormaw for another boost. The Hunter has enough Deathrattle minions to make a cheap spell like this work, especially in the later game with minions like Savannah Highmane. It can even work nicely with Deathstalker Rexxar and his custom zombeasts. 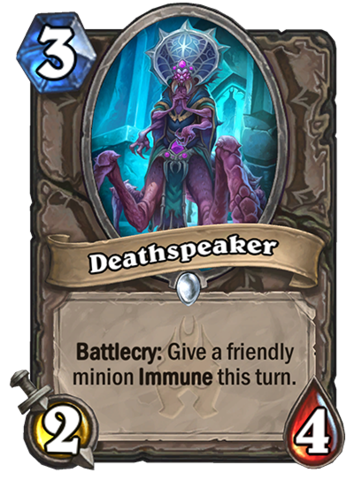 Deathspeaker is an upside-down Stablemaster, but one that offers immunity to a friendly minion of any kind. This could be helpful for zoo decks that absolutely need to trade into an opposing threat and keep the board presence growing. On top of that, 2/4 stats means this is more likely to stay alive.

Deathspeaker would also be useful following an adaptation play, like Gentle Megasaur or Evolving Spores. If any minions pick up the Poisonous quality, give it immunity and trade it in, taking down a bigger threat and staying alive to do it again on the next turn. This minion isn't an automatic pack in, but its Battlecry makes it a half-decent Arena pick. 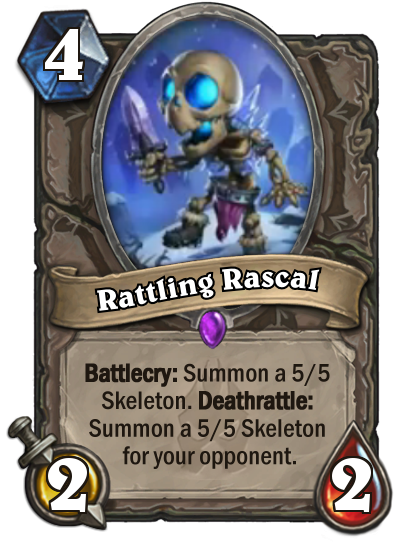 Rattling Rascal has a tremendous Battlecry effect, putting down a 2/2 and 5/5 body on Turn 4. It's like the Twilight Summoner effect, only with an immediate payoff.

The downside is that the death of the 2/2 body has a Deathrattle of putting another 5/5 on the opposing side of the board. Fortunately, there are more and more ways around this problem. It's possible for Silence Priests to utilize Purify or Silence, especially if it comes off of Lyra the Sunshard.

But the Warlock has a far more fun use for this guy and that's by combining it with the new Treachery spell. This allows the player to keep the 5/5 Skeleton and kill the 2/2 on the other side of the board to get another 5/5 Skeleton.

It's unlikely this will see a lot of play either in constructed or Arena, but it's fun to think about what's possible. 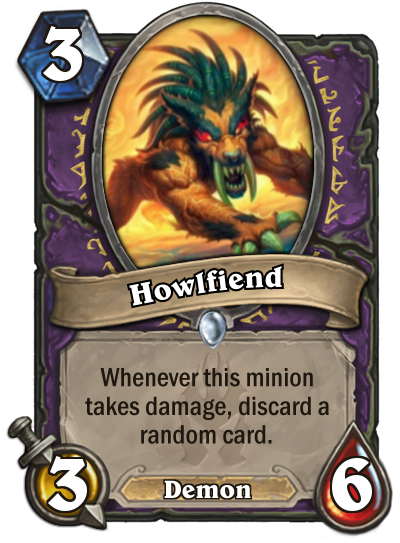 Hey, speaking of Treachery, let's take a look at Howlfiend. Let's make no mistake about it, this one has the potential to backfire huge. Sure, it might help with the Lakkari Sacrifice Warlock Quest, but a 3/6 body may not be worth losing so many minions and spells. Maybe the plan is to buff up Blood-Queen Lana'thel, but that plan sounds like folly on this end.

So instead, why not use that amazing Treachery spell and send it on over to the other side. Start targeting it with minions and watch the opposing hand fly away. Try this strategy out and watch the opponent expletives go!

That's assuming Warlocks willfully pack this into their decks... which they shouldn't. 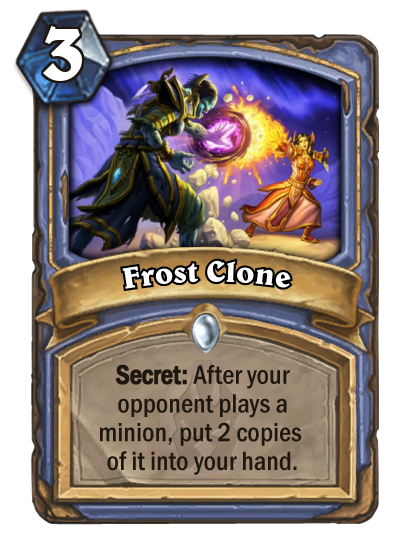 Now let's back to that fun Warlock spell conversation that was tabled earlier. This ranks up there as the most fun and the most devious of the Warlock's new spells, as it takes a burdensome friendly minion and sends it to the opponent.

Frost Clone is the first of the new Mage Secrets to hit this expansion. This one offers a twist on the old Duplicate spell, only instead of offering two copies of a friendly minion that has died, it offers two copies of an opposing minion that hits the board.

In some ways, it's an improvement on Mirror Entity, since the Mage will now get to enjoy the Battlecry effects of the minion in play. And given that an opponent will likely look to maintain tempo, this is one they can easily fall for. Whether it's part of any Secret deck or a pull from Primordial Glyph, this Secret has the potential to cause some real damage. Definitely play it alongside Kirin Tor Mage. 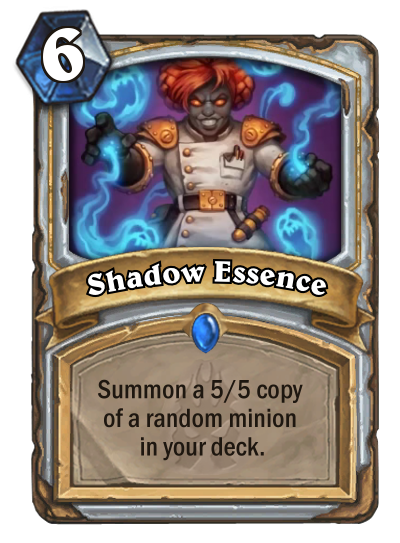 A 5/5 body at 6 mana is a solid play under a lot of circumstances. But imagine the Priest getting a 5/5 minion from their own deck. At worst, it's a simple vanilla 5/5. But with the influx of Deathrattle minions, this is a potentially strong card.

It's a much stronger version of the Barnes effect, but one that's far less likely to backfire in the Priest mirror, where Potion of Madness has become all the rage. This is one of the stronger Priest spells to come along and will serve Quest Priests quite nicely. 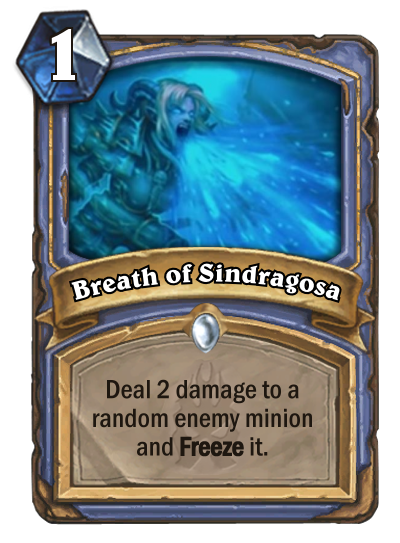 Let's talk about a blast from the past. Anyone remember Flamecannon? That's the 2-mana spell that would deal 4 damage to a random enemy minion. Now cut all of that in half and add a freeze effect and it equals Breath of Sindragosa.

This is arguably better for the early game against weaker minions, but can also come in handy later in the game, since it can freeze its hapless targets. Maybe even play it with Coldwraith to get some card draw, to boot.

The issue becomes its random direction, which makes it a lesser play than Frostbolt. It's a solid pull from Cabalist's Tome, but it shouldn't be packed into any constructed deck. 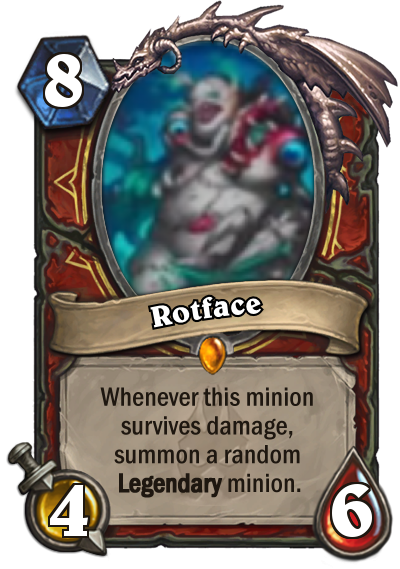 The Warrior has been getting an awful lot of minions that benefit from damage and spells that issue damage. So Rotface is this idea taken to its logical conclusion, summoning a random Legendary for every time it takes damage.

This makes it a perfect play with Whirlwind and Ravaging Ghoul, along with new cards like Animated Berserker and Blood Razor.

Here's the thing to think about, though. Yes, randomness is always alluring. It's like a slot machine. Always go in thinking a jackpot is one pull away. But for 8 mana, why not just play the old Warrior standby Grommash Hellscream? Warrior players can pull off these exact same combos, with the big difference being that they can get a 10-Attack Charge Legendary that's sure to hit. That sounds a lot more appealing than rolling the dice with random Legendaries. So maybe think twice before packing Rotface into any deck.

That's all for now. Come back tomorrow for another round of card analyses, as we march towards next week's release date. Plus, remember that Blizzard is promising more Death Knight reveals. Shacknews will do deeper analysis on those individual Heroes as they are revealed.