Hearthstone: Knights of the Frozen Throne - Analyzing Uther of the Ebon Blade 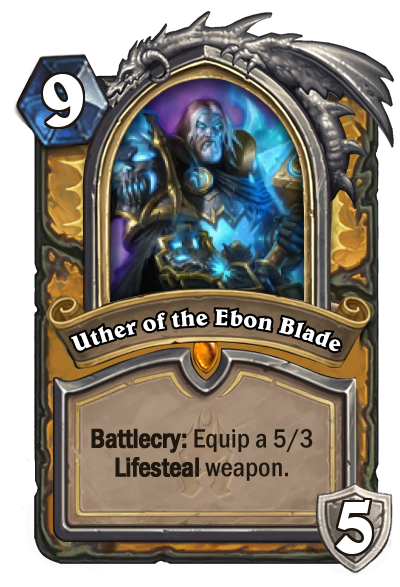 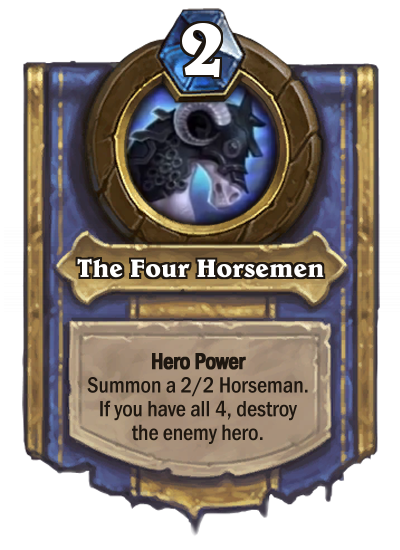 The Four Horsemen
Type: Hero Power
Class: Paladin
Summon a 2/2 Horseman. If you have all 4, destroy the enemy hero.

This is an eye-opener for the Paladin. Uther's new attitude and his new Hero Power essentially put opponents on a doomsday clock. If he manages to get out all of his Horsemen, it's an instant victory.

But if that's not enough, Uther gets a far-greater version of Tirion Fordring's Ashbringer weapon, one that can replenish his health.

The Horsemen present an interesting conundrum to opponents, because on their own, they represent benign threats. Even as they start to increase in numbers, they're easily disposed of with cards like Primordial Drake or pretty much any area of effect spell. The issue for the opponent becomes that they don't have infinite removal resources and when those start to wane, what happens then?

Well, ideally at that point, the Paladin would have finished the game anyway. But if not, having four horsemen on the board is a pretty cool way to wrap things up. 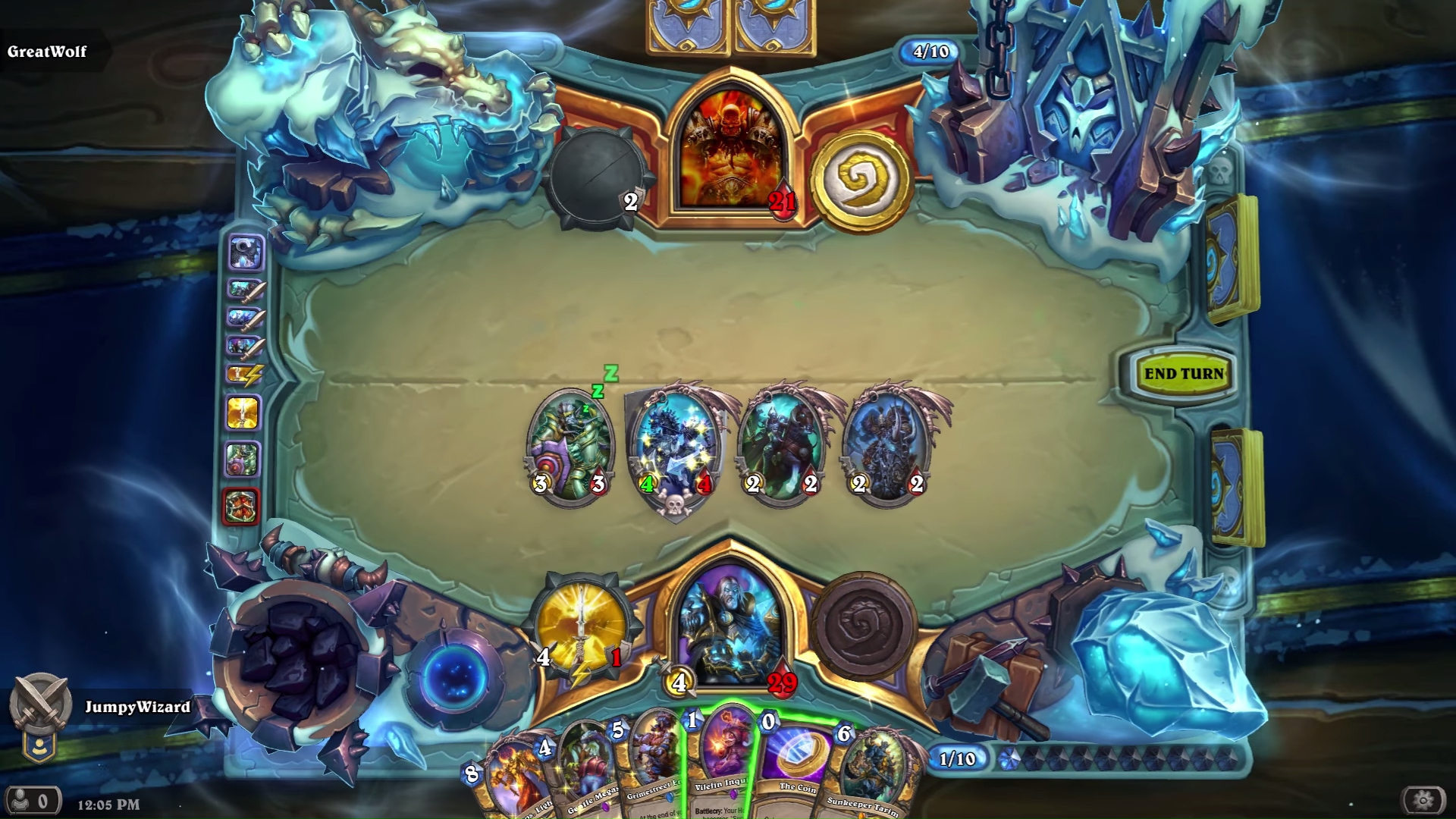 What's interesting about Uther of the Ebon Blade is that the typical Paladin strategy might mean he won't be able to get out of his own way. The Murloc Hero Power offered up by Vilefin Inquisitor is actually key for the Murloc Paladin deck, given its interaction with other Murlocs. It's hard to see Murloc Paladins biting on this new Death Knight Hero when the Hero Power Murloc has synergy with cards like Murloc Warleader and Gentle Megasaur.

There is, however, one Murloc that may like this Hero and that's Hydrologist. Secrets like Getaway Kodo or Redemption might keep the Horsemen kicking long enough to make the opponent sweat.

Buffing the Horsemen is also an option. Even without the end game condition, they become great bodies for Spikeridged Steed or targets for Sunkeeper Tarim. Divine Shield effects are also an easy way to keep them alive, so don't be afraid to play that Adaptation or Argent Protector. Another pro-Horsemen strategy involves freezing opposing minions with cards like Glacial Shard and gambling on the opponent not having hard removal, but that's not recommended.

In fact, Paladins should simply play their game, not thinking about the Horsemen, except as a last resort. A standard Paladin strategy should still do well in this meta, especially since the hope is that Sunkeeper Tarim will end the game early. Don't build around the Death Knight play, but rather enjoy its presence, because that 5/3 Lifesteal weapon could be a lifesaver towards the end of the game. Just don't get sloppy with those weapons. Playing Tirion while Uther of the Ebon Blade's swank weapon is out is exceptionally risky, given how vulnerable to removal spells Tirion can be.

If you absolutely must focus on a Horsemen victory, for whatever reason, then don't play the Death Knight Paladin without packing Auctionmaster Beardo. Given the low cost of Paladin Secrets (most of which should be coming from Hydrologist), it's possible to get multiple Horsemen onto the board in a single turn. And barring an area-of-effect spell, the opponent will likely have to choose between getting rid of the Horsemen or removing Auctionmaster Beardo. Those that love to play Wild, this actually has the potential to be a one-turn kill, thanks to cards like Emperor Thaurissan, Garrison Commander, and the numerous Spare Parts from various mechs. Try it!

Playing Against Uther of the Ebon Blade

Like Exodia decks in Yu-Gi-Oh, the spectre of a doomsday clock is more terrifying than it actually is. A lot of things would have to go terribly wrong for a Paladin opponent to actually be able to pull this game-winning condition off.

With that said, if the Horsemen count starts to get out of control, feel free to trade in those minions or use removal spells. 2/2 stats are exceptionally weak near the end of the game, so they should be easily dealt with. The aforementioned Primordial Drake should be an easy way to dispose of any pesky Horsemen.

But while those stats are menial, do not ignore the Horsemen. If any of them start to get buffed up, remove them immediately. It'll ultimately hurt the Paladin in the end, since they'll have wasted a precious resource on it. Likewise, if two or three have taken the board, use an area-of-effect. And if any of them wind up back in the Paladin's hand through a Secret like Getaway Kodo, do not forget about it later. Neglect and sloppiness can lead to an embarrassing loss.

Aside from that, the 5/3 Great Vengeance weapon should become the focus. Be ready with an Ooze or a Harrison Jones, the latter of which would provide some valuable card draw. Considering the weapon's Lifesteal ability can put Paladins back in the game, health-wise, it's important to deal with it quickly.

If you're playing Wild, hit hard and hit fast, because more than one Paladin is going to attempt that OTK Auctionmaster Beardo trick. The only way to stop it will be to end the game before then and if Emperor Thaurissan comes out, that's the sign to pick up the pace.