Hearthstone's next expansion, Knights of the Frozen Throne, is slated to release on August 10. While the main attraction will be the new Death Knight heroes, the expansion is set to receive 135 new cards. Shacknews is going to do its part to march towards this new expansion by analyzing the new cards throughout the week. 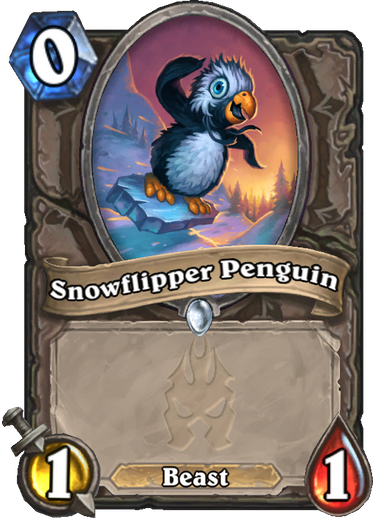 It's a penguin! HE'S SO FLUFFY!

Ahem...yes, it's a Standard replacement for Murloc Tinyfin, only instead of Murloc synergy, players get Beast synergy.

What that means, since nobody in their right mind will pack him in a constructed or Arena deck, is that he'll be the dud that gets drawn from a Jeweled Macaw in Standard or Webspinner in Wild.

If that's what happens, make lemons out of lemonade and buff him with Houndmaster or Crackling Razormaw.

He may be cute and cuddly, but with the right buff, he can still cause some damage. 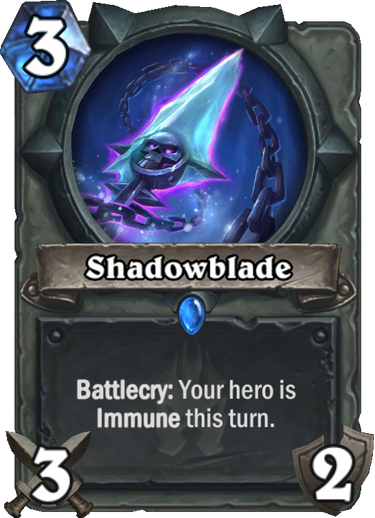 This is an interesting, albeit imperfect, weapon for the Rogue. It offers immunity, but only for a single turn, which makes it a much inferior version of the Hunter's Gladiator's Longbow.

It likely won't make its way into constructed decks, but could be an intriguing Arena pick, especially when combined with Envenom Weapon or Leeching Poison. The fact that the immunity only lasts a single turn even gives slight life to Blade Flurry. Not enough life to actually play it, but it's a combination that's worth mentioning. 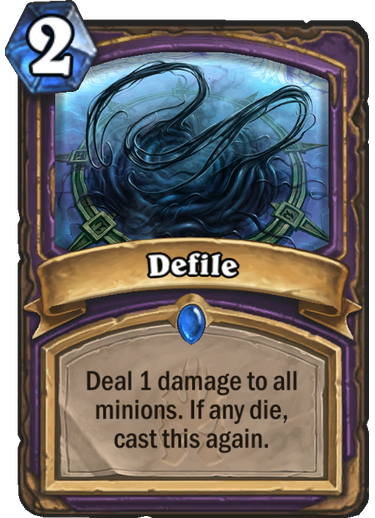 First thing to note is that Blizzard's QA team is on the ball, noting that this spell had the potential to break the game in Wild if any Dreadsteed was on board. So farewell, Dreadsteed, as everyone knows it. Your viability was fun while it lasted, but sadly, you were not immune to the nerfbat, either.

Regarding this spell itself, there's something funny about Warlock making the zoo deck fashionable, falling off the trendy bandwagon, and ending up the class that ultimately solves the zoo problem. Defile is almost a guaranteed board clear in the early turns. Even if Druid or Hunters buff up their minions, Elven Archer ensures that this spell gets cast multiple times, while Mortal Coil can mop up any leftover mess.

At such a low cost, this is bound to become a Warlock staple. Even if Zoolocks try and establish a board presence early, a Defile play is worth some sacrifices if the opposing board starts to get out of hand. 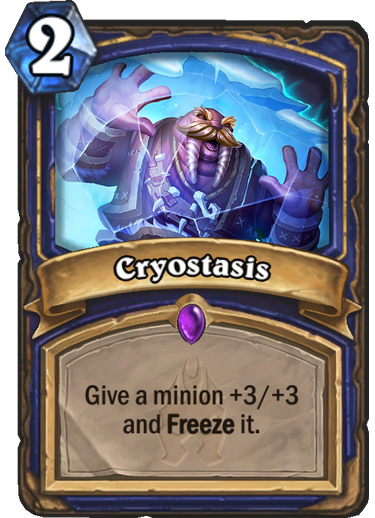 The Freeze Shaman archetype continues to move forward with this spell, though it has a bit of a severe drawback both ways. This will boost a target's stats by 3, but it'll also freeze it.

Clever Shaman players will quickly think to use this spell on their own 0-Attack minions. This will buff up Flametongue Totem, Mana Tide Totem, and Primalfin Totem, all of which weren't doing much attacking themselves anyway. Not only does it give them some attack power, but it also helps ensure they stick around by boosting their stats to 3/6. These totems are all immensely useful in their own way and giving them a Cryostasis boost is a huge help in the early game.

Assuming the Shaman player has enough health to spare, they can also eat the extra three damage and trade into the frozen minion with Ice Breaker to get rid of it. There's another new card that'll be plenty useful with this spell. In fact, let's talk about him right now.

(6) Moorabi (4/4)
Type: Minion
Class: Shaman
Rarity: Legendary
Whenever another minion is Frozen, add a copy of it to your hand.
Source: Card reveal stream with Day9 & Matt Place

The scenario that Day9 and Matt Place presented was a Shaman facing off against a Mage and Archmage Antonidas. The Shaman player dropped Moorabi, froze Archmage Antonidas with Voodoo Hexxer to add a copy of the Mage Legendary into their own deck, and then destroy the opposing Antonidas with Ice Breaker. That's a pretty nasty combo, albeit a scenario that feels unlikely to come up.

Still, this is a fun effect and one that can be very dangerous. Moorabi is cheap enough that he can be combined with Frost Shock or Glacial Shard. Or maybe that Cryostasis combo discussed earlier wasn't able to work in the early, so try it in the late game. Get another valuable Totem to add to the hand.

Here's a fun thought for Arena players, too. Try dropping a Frozen Crusher and then a Moorabi on the next turn. Attacking with the Frozen Crusher should then freeze it and put a fresh copy into your hand. Not too shabby.

Moorabi's problem is ultimately that his 4/4 stats are weak for a 6-mana drop. So have that follow-up play ready, because it's unlikely he'll stick around after the next turn. 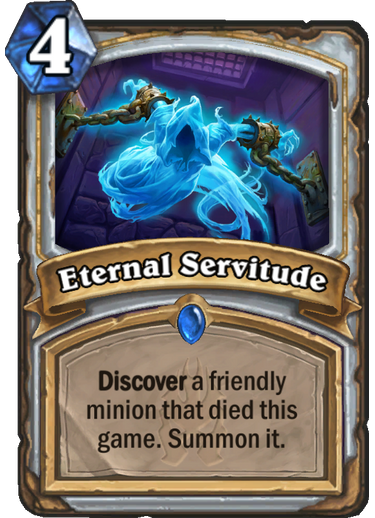 This is a very interesting twist on the Resurrect mechanic, because now the Priest gets to actively reach into the graveyard... sort of. Priest will get to pick any of three minions that died and bring it back out, which can have a variety of uses across all phases of the game.

Facing off against an aggro deck that managed to tear through a defensive Tortollan Shellraiser? Let's reach in and bring it back? Is it late in the game and that friendly Primordial Drake has fallen in battle? Let's bring it back for a paltry 4 mana!

But while it's not as RNG-heavy as Resurrect, there is still RNG involved. The idea would be to select a Deathrattle minion that can still have an effect on the game, but there's still a chance the three choices can all be duds. Onyx Bishop honestly feels like the better play, just because it comes with that precious 3/4 body. However, Priest players can hardly be blamed for wanting some agency in their resurrection choices. It'll also be a strong card to pull from Lyra the Sunshard. 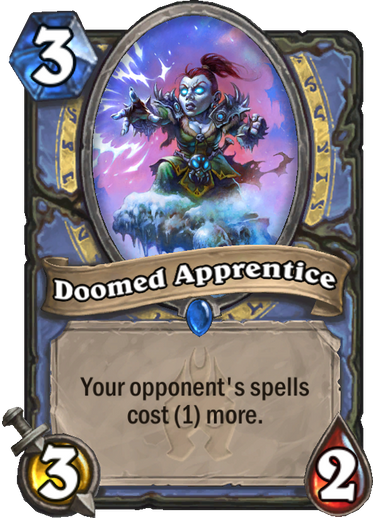 Yes, it's the Bizarro Sorcerer's Apprentice, but with one key difference. This thing costs one more than the old minion that it is based on. It's somewhat understanable, given the potential early game swing, requiring an extra mana for spell removal or a minion trade-in.

Still, in an effort to promote synergy and similarity, the Doomed Apprentice still gets some menial 3/2 stats, making it easy to deal with. It's an intriguing tool for the Mage mirror, since dropping it in the late game ensures that the potential game-ending Pyroblast can wait one more turn. However, since double Fireballs and discounted Primordial Glyph spells would still be on the table, it's hard to imagine Doomed Apprentice being all that useful. 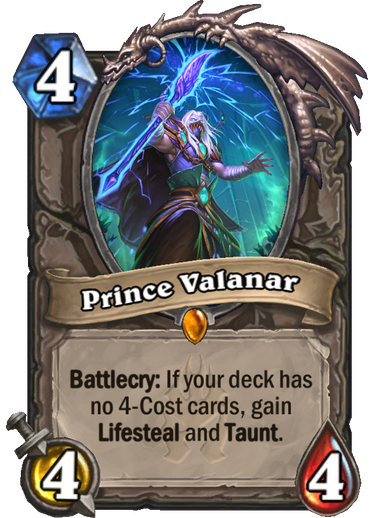 Argh! Here's the third of the Legendary princes and he may be the worst of the bunch.

One might think that he's slightly more viable because how many useful 4-Cost cards are there, really? Well, even vanilla Hearthstone has its Chillwind Yeti. But beyond that, are Warriors really going to dump their Kor'kron Elite? Are Priests dumping their Auchenai Soulpriest or Tortollan Shellraiser? Are Hunters dumping Houndmaster?

And even if they opt to do that, what's it really for? The answer is a Taunt and Lifesteal effect, which Corpsetaker can also get with potentially more.

The princes are duds. Nobody should be playing these guys under any circumstances. Not with so many useful early play cards out there. 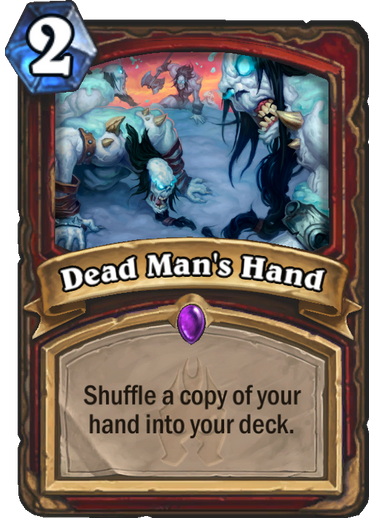 This is a huge addition for Warrior, but an especially useful one for the Quest Warrior that's looking for some more Taunt minions and is looking to play the long game. Think of it as a backup option, in case the matchup drags longer than it needs to.

This feels like a strictly late game play that helps Warriors replenish their resources. On top of adding those Taunt minions, maybe get that extra Un'Goro pack from Elise the Trailblazer. Either open the pack and copy all of those cards or copy the spell itself to get a second random pack later.

It should also be interesting to experiment with the old Control C'Thun Warrior deck, since Dead Man's Hand means pumping out more copies of C'Thun, Doomcaller (to revive C'Thun), and Ancient Shieldbearer (to armor up from C'Thun). I'm ready to blow some dust off of the old deck and play around with the possibilities. 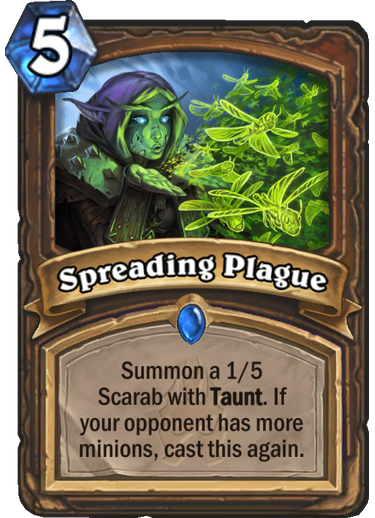 And that's certainly what this is, only instead of dogs with Charge, it's 1/5 scarabs with Taunt, creating a wall. It's a surprisingly effective strategy against aggro decks, as 1/5 stats are pretty durable against most area-of-effect spells. It's unlikely that they'll clear the board, but if it's played later than Turn 5, remember that Druid has numerous buffing options.

Let's assume a chunk of these scarabs survive to the next turn or it's a Turn 9 play and they're just taking the board for the first time. Evolving Spores has the potential to make all of these scarabs a nightmare to deal with, if any of them get Divine Shield, +3 Health, +3 Attack, or even the 1/1 plant Deathrattle. This is looking like one of the strongest spells to come the Druid's way for this expansion and one that can pay some serious dividends.

That's all for now. Come back tomorrow for another round of card analyses, as we march towards next week's release date. Plus, remember that Blizzard is promising more Death Knight reveals. Shacknews will do deeper analysis on those individual Heroes as they are revealed.