How I Beat Dark Souls 2 Using a Ladle, Part 3 - Flexibility

After more than six hours of play time, I had almost everything I needed—assuming the tales told on Dark Souls 2 wikis and forums were true—to imbue my ordinary and broken spoon.

Only three obstacles stood between me and what I hoped would be the end of smacking enemies and growing inordinately excited at dealing a whopping 22 damage points instead of 15 or 16. The first awaited me in the cabin of a ship that would take me to the second. The third involved retrieving an ember and meeting the acquaintance of blacksmith Steadyhand McDuff, every Dark Souls 2 player's favorite loquacious ray of sunshine. Being something of a freethinker, I decided to check Obstacle #3 off my list first.

Counting out of order? How iconoclastic! Hey, when the only weapon you allow yourself to use is a busted scoop, sometimes you have to give yourself permission to tackle easy tasks firsts.

This diary chronicles my attempt to play through Dark Souls 2: Scholar of the First Sin using only the Handmaid's Ladle. Miss an earlier entry? Get caught up here.

Killing Pursuer left me satisfied and excited. Satisfied because I'd never attempted the "parry one of his attacks then fire the ballista at him while he stands around looking dazed" strategy, and I managed to pull it off. Excited because beyond Pursuer's arena was a bird's nest that, upon squatting in it and doing my best impression of an egg, prompted the appearance of a giant bird that spirited me away to the Lost Bastille. My feathered friend deposited me in front of a bonfire and two iron chests, one of which held the Dull Ember.

Putting the Dull Ember in Lost Bastille was one in a long list of excellent changes FromSoftware made in Dark Souls 2: Scholar of the First Sin. The ember, which you must hand over to Steadyhand McDuff, whose affable demeanor never fails to put a smile on any player's face, used to be on a corpse in a hard-to-reach spot in the Iron Keep, one of the game's tougher early-game areas. Elite players who performed ladle-only runs in "vanilla" Dark Souls 2 had to brandish their broken spoon through considerably more zones en route to getting the Dull Ember.

I still have nightmares about how many hours it took me to chop down the Last Giant, whom I now fondly refer to as That Damn Tree. I shudder to think of how long it would have taken me to fight another half a dozen bosses before even getting the opportunity to infuse my ladle with mundane damage in the original version of the game.

Plucking the Dull Ember from the chest, I set off through Lost Bastille at a sprint. It was still prudent to evade rather than engage enemies. At the top of a set of stairs leading down to a plain stone wall, I punted a black barrel, sending it careening down the stairs and into the wall where it exploded, ripping a hole through the stone. A bonfire sat on the either side. Dodging a few more malcontents, I rested at the bonfire and made my way into the adjacent chamber, where Steadyhand McDuff sat muttering about flames. Handing over the ember perked him up considerably, by which I mean he continued to mutter and grumble, but with a twinkle in his eye. Look closely and you'll see it. Look closer. Closer still.

With McDuff's forge fired up and ready to infuse, I could have added mundane damage to my ladle right then and there. I refrained. The only way I'd been able to beat That Damn Tree was by venturing into No-Man's Wharf and learning the Magic Weapon buff from Carhillion of the Fold. Magic Weapon's damage scales with your Intelligence. For the spell to inflict as much pain as possible, I'd needed to return to Things Betwixt and hand in a Soul Vessel, thereby allowing me to reallocate my level-ups into the INT stat.

To get back on the mundane path, I needed another Soul Vessel so I could backpedal from an INT-focused build and even out all of my stats so mundane scaling would take effect. Infusing with mundane damage now, with my stats so out of whack, would have made my damage even more pitiful.

Instead, I had McDuff infuse my spoon with Enchantment. The Enchantment infusion scales damage with INT, which I had to spare, and would need to tackle Obstacle #1: The Flexile Sentry.

By this point, I was an expert at keeping my head down and racing through No-Man's Wharf like a scaredy-cat, avoiding conflict and making a beeline for my goal. Ignoring Carhillion, who had been content to meditate at the end of a pier and ignore me while I got mobbed by zombies, I headed for the ship and the fog gate in the lower cabin through which Flexile Sentry, a two-sided boss each with two heads, two sets of hands, and two sets of weapons, awaited.

Flexile Sentry and That Damn Tree share two things in common. They're both early-game adversaries that most players catch on to and overthrow quickly, speed bumps on the road to bigger and tougher bosses. And they both gave me grief by taking much, much longer to kill than I expected.

My YouTube videos of each boss fight or excursion into an area to complete some objective only tell a fraction of the story. You see the occasion I was successful, not the three, six, 12, or more I failed and the lessons I gleaned from those defeats that facilitated victory. The same way many users curate social media to paint themselves in the best possible light. This diary divulges the often humbling truths behind those scenarios. Truths like taking hours to kill that damn tree. While I didn't need nearly as much time to kill Flexile Sentry, he remains the second-most challenging boss of the entire run thus far.

To be fair, the culprit was less Flexile Sentry and more my lamentable damage output. Enchanting my broken ladle and spending all the souls I'd gained from killing That Damn Tree and Pursuer into Intelligence helped, but it didn't make up for the fact that my weapon belonged on a garbage heap instead of crossed with Dark Souls 2's biggest and sharpest blades.

Death is a learning tool in SoulsBorne games. Or it should be, if you're using it correctly. Each YOU DIED screen is suffered at the hands of Flexile Sentry opened my eyes to new wrinkles in his  attack patterns. I learned, for instance, that it's easier to fight the side that wields dual clubs instead of twin scimitars. Where his swords strike quickly, he swings his clubs more slowly. Sticking to one side allowed me to concentrate on learning one set of attacks instead of two.

I knew ahead of time that the ship's cabin slowly floods as the fight unfolds, hindering movement until you can no longer sprint. But I had always killed Flexile so quickly that the water level never rose above my ankles. Unable to sprint, I had to roll and circle-strafe around him, keeping the mast in the center of the room between us when I needed to heal or recast Magic Weapon to eke as much damage out of my stupid spoon as possible. In this fight more than any other, I honed the timing and reflexes needed to roll through attacks with low agility—that stat that determines how many invulnerability frames you receive for dodges such as rolls and backsteps. 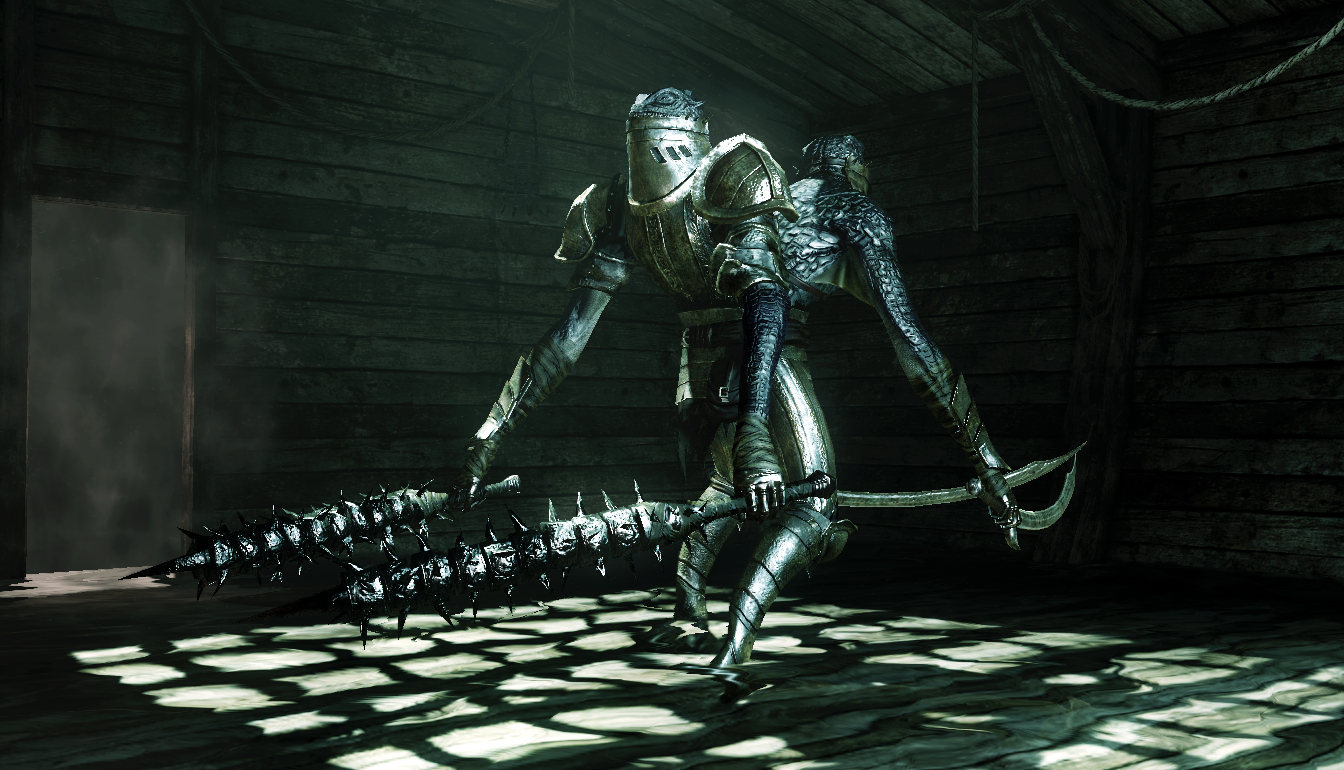 I also witnessed new attacks, or at least they were new to me. Many SoulsBorne bosses enter a second phase after losing a set amount of life, usually between 33 and 50 percent. The second phase tends to be more aggressive; they change up their attacks to force you to adapt. Some bosses announce these phases more overtly than others. Fume Knight, master of the Crown of the Old Iron King DLC expansion, dispenses with his straight sword and lights his ultra-great sword on fire.

Flexile Sentry's second phase is low-key. From what I saw, he added two new attacks to his repertoire: a lunge that takes a huge bite out of your health, and a bendy stab where his sword-wielding side stretches up and over the club-wielding side to stab at the ground. Just like that, a boss I thought I knew and had dismissed tested my mettle.

Complicating this fight was the fact that I had souls to buy life gems, but not enough souls to buy more if I ran out. My strategy was to save gems until I could decide whether or not I had a good chance of winning the fight. If I got steamrolled early, I'd save my life gems for another attempt, or until later in the fight if things started going my way.

I gained a newfound appreciation for Flexile Sentry. I won't go so far as to say he's one of my favorite bosses in the game. Rather, he reinforced my notion that no enemy in SoulsBorne is cannon fodder. Each has a part to play, and to those willing to open their eyes and see them, they play it well.

Obstacles one and three were finished. Obstacle #2, finding a Soul Vessel to respec my character for mundane damage, was the least risky task on my to-do list, but when you're playing through Dark Souls 2 with a spoon, everything you do carries at least some risk.

There's a Soul Vessel in a secret chamber in the quadrant of Lost Bastille that must be reached by defeating Flexile Sentry and setting sail in his ship. Coming into port, I ran like a coward—that is to say, like a man armed with a broken spoon—through Lost Bastille and accessed the hidden compartment via a Pharros Lockstone. I had a nasty scare when an enemy charged in behind me while I popped the lid on the wooden treasure chest holding the Soul Vessel and came close to smashing it. If a wooden chest is smashed before you can open it, any objects inside are smashed to bits along with it, turned into Rubbish that's good for absolutely nothing. Because it's rubbish. If a wooden chest is made to do its impression of a pile of splinters after you've popped its lid, however, the items inside survives.

Video game logic is weird and dumb. When it works in our favor, it's the best. Just the best.

To test my mundane-infused spoon, I paid a visit to a certain zombie who posts up near the second bonfire in the Forest of Fallen Giants. Killing him was an act of petty vengeance, I'll admit. I won't apologize, though. He was my guinea pig. Each time I reached some pre-mundane milestone, such as learning Magic Weapon or enchanting my spoon for extra magic damage, I would warp to that bonfire and call him out. Each time, he got the best of me.

Not this time. I killed him because he more than any other enemy gave me brief during those halcyon days when my spoon wasn't good for anything, not even serving soup. Getting into position for a backstab maneuver, I grinned at the solid CRUNCH of my still-broken-but-now-mundane-infused kitchen utensil shattering his spine.