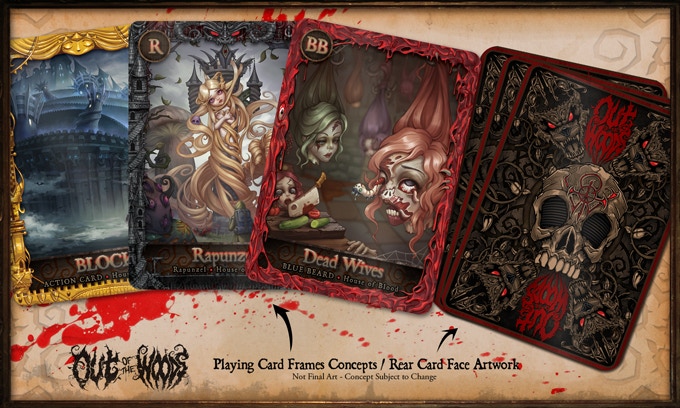 American McGee, designer of action-puzzler Alice, has taken to Kickstarter to raise funds for Out of the Woods, an all-in-one tabletop card game, illustrated art book, coloring book, and series of art prints rooted in fairytales.

"Once upon a time," reads Out of the Woods' landing page, " there was a game designer called American McGee who having lived a life of dramatic ups and downs, decided to present a unique creative take on a selection of traditional fairy tales as a Table Top Card Game, Illustrated Book, Coloring Book, and Collection of Art. He hoped the lessons contained within might help others along their journey through the dark woods of existence."

McGee is no stranger to telling tales that start with "Once upon a time." Over 2008 and 2009, his Shanghai-based studio Spicy Horse developed an episodic adventure series titled American McGee's Grimm. Each episode was a darkly humorous take on a classic fairy tale where players mucked up bright and colorful worlds to put a dour spin on happy-ever-afters.

If the crowdfunding campaign is successful, American McGee and his team hope to develop Out of the Woods into "an ongoing series of games, books, and original art which will explore lessons for overcoming life's challenges contained within classic fairy tales."

You can learn more about Out of the Woods on its Kickstarter project page.