Our video game lives can be radically altered by the arrival of children. As a rather new grandfather working from home, I had the joy of spending the long Memorial Day weekend with my two-year-old granddaughter, although I had to work a bit trying to get familiar with World of Warcraft's upcoming 7.2.5 changes for a potential story, and also playing through Prey for a review.

My granddaughter is a real love, already good at communicating, but incredibly demanding for attention, as any youngster that age is. She already knows about games, as her father is an avid PlayStation 4 gamer and she "plays" with him, although her use of the controller usually involves moving a character forward while having the view toggled at the floor. But when she is done with daddy, she excitedly runs to mommy shouting "I game, I game," which elicits squeals of joy and hugs and kisses.

When she realized Papa games, she was soon watching my screen as I played for work. She would ask to sit on my lap and game on my PC, but had to explain that Papa was working, and that I couldn't game with her right now. "OK," she would say as she toddled off to find something else to grab her attention, either another round of "fishy Ray" (Finding Dory), "mana" (Moana), or some educational book about animals or the alphabet. Every once in a while, I'd hear "Papa, look" when she was doing something silly, or "Hi Papa" when she wanted my attention. Each time, I'd glance her way and smile, say "Hi, sweetheart, Papa loves you," and that was enough for the next 10 minutes. Needless to say, concentration and productivity dwindle when my little girl is around.

But for some reason, this weekend was a bit different. Maybe it was because I had her the whole day on Saturday while her mommy and daddy went to check out the status of her new baby brother or sister due in October. But my granddaughter was all about knowing what I was doing.

"Yes, sweetheart, Papa is working. I need to play this game for work."

"No sweetheart, I need to get this done." 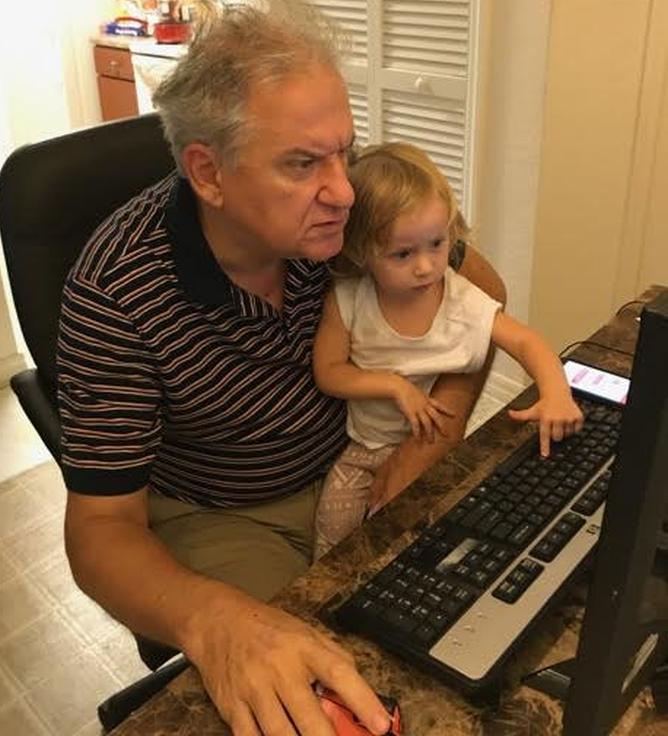 Well, that was it. I didn't want to ignore her and I definitely wasn't going to leave her by herself, so I lifted her into my lap and proceeded to show her what I was doing. I asked her not to touch the mouse or keyboard while I explained what I was doing to her. She didn't say a word and watched the screen intently, listening to everything I said. I was playing World of Warcraft on my hunter at the time and asked her what she saw.

And that's when we started playing co-op on my PC. I would use the mouse to move, while I showed her what keys to hit. Running around town was fine but it wasn't interesting enough, so we went to a combat zone where the "dog" could run and attack things. I showed her what key to hit to fire my bow as I used my mouse to aim and WASD keys to move. We actually did quite well until we accidentally pulled that world boss.

"Yes you did, sweetheart, good job."

So we loaded up my rogue.

"Hat," she said, pointing to my stylish transmogged chapeau. And with that, she pulled my reading glasses off my head and put them on her face. "I Papa."

Someone must have been cutting onions nearby as I kissed her cheek and logged out to the character screen. I showed her all my characters and asked her which ones she wanted to play. We eventually tried all of them, and each time, she kept hitting the same key and laughing at the funny things happening on the screen. Funny usually meant dying, but it was all in the name of seeing the joy on my granddaughter's face.

When she got tired, I put her down for a nap and got more real work done, but wthin two hours she was up, and again wanting to game. She climbed up into my lap, but this time I loaded up a different game. I needed to experiment more with Prey, so I jumped in and pointed out all the monsters as I hid. She got so excited, she hit my "run" key without realizing it, and soon I was sprinting all over trying to run from Phantoms and Mimics as she giggled at my obvious anxiety.

Once, a mimic jumped out of the darkness and she jumped. I was nervous that she might cry, and I was ready to console her, but she surprised me.

"Yes, honey, dying is funny today. Are you having fun?"

So we ran around Talos I pulling every monster we could find so I could die for my granddaughter's entertainment. I was making silly sounds as I ran, adding to her amusement. When the monsters were gone, I let her punch in numbers to safes and locked doors, making her match the numbers on the screen to the keyboard.

"I DID IT!" she screamed as the safe opened. Yes, I was a proud Papa.

A few minutes later, mommy and daddy walked in, and she scrambled off my lap to give them a hug and a kiss. Seven hours had passed in an instant.

"I game, mommy, I game." Mommy gave her a hug, daddy looking very proud while standing behind.

"I'm sorry you didn't get any work done," my daughter said.

"That's OK," I told her. But truth be told, It was probably the most productive day I have ever had.